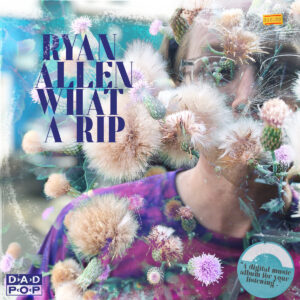 Seemingly ever restless, his solo record ‘What A Rip’ (released at the beginning of 2021) shows off a few different sides to the songwriter and performer yet again. The ongoing Covid-19 pandemic meant that most of the instrumentation had to be provided by Allen alone (hey, it worked for him in times past, and even provided the similarly talented Pavid Vermin with a genuine classic), but that isn’t to say that the album feels rushed or flat. In fact, very much on purpose, the record is one of his most varied to date.

As a love letter to his many influences growing up, the ten recordings always flaunt a very retro style, but whichever form they take, Allen’s knack for great riffs and melodies shines through. When the retro love is applied the hard rockin’ glam of ‘Get To The Gig’ – a mix of old Poison and Kiss influences applied to more of a garage rock aesthetic – or the Aerosmith-ish ‘Look Into My Eyes’ – a number where 70s hard rock riffs have so much weight – Ryan sounds more than assured. He sounds even more ballsy during ‘Already Gone’, when he approaches a tune that brazenly takes the guts of The Rolling Stones circa ’65 and mangles them into something with more of a mod friendly charm. It almost doesn’t matter which aspects of rock Allen revisits; with each one, his abilities are more than obvious and even with a knowing wink applied, the results are more than enjoyable.

It’s when opting for something a little poppier, however, that this release’s greatest strengths are on show. Delving deep into the world of classic pop, ‘Shannon Cake’ displays a deep drum and late 60s bells that hint at a love for The Beach Boys. Those flourishes soon become a full-scale Wilson-esque blast with the arrival of a huge array of “ba-ba-baas” that are, shall we say, unashamedly borrowed. There’s something about Allen’s own take on the ‘Smile’ era sound that comes out a little more Headquarters era Monkees in the process, but this is never a bad thing, especially when the listener is left with the kind of arrangement that sounds like an old classic, meaning any potential for it to become an earworm is automatically multiplied. Equally cool, the ragged guitar pop of ‘On My Mind’ is almost a direct lift from ‘Last Train To Clarksville’. The main riff is only a couple of steps away from the familiar original, but with an increased volume, a Cheap Trick-esque sneer applied to the vocal and the loud jangle of Allen’s usual fare cutting through, there are moments when this starts to sound more like a tune with plenty of its own charm. Alongside ‘VTO’ – a song that’s absolutely loaded with a 1970s bar-room sleaziness and a brilliant vocal – it’s very much a highlight in terms of crashy guitar riffs. Obviously, if you’re one of those people that’s turned off by the lack of originality, then you probably won’t enjoy it…and if you don’t enjoy it, you’ve somehow missed the point of the whole release.

An instant stand out, ‘Election Night’ feels very much on the side of epic rock pop with hazy, post-psychedelic vocals and the kind of forthright guitar you’d experience from Denny Laine on some of Wings’ chunkier tunes. At the same time, it feels so much more original than some of these cuts. Its two and a half minutes feel much longer too, somehow – in a good way – and the way the music builds is testament to Allen’s studio expertise, showing how lockdown could still inspire some fantastic levels of creativity. Despite being created in a demo like way, there’s very little here that could’ve been improved with better studio facilities and more musicians involved. It could even be one of the best tunes Allen has ever written. The only time Ryan doesn’t really push his own talent is on the album closer, ‘Only Son’. An obvious Lennon pastiche right down to the clanging piano and phased vocals, it’s more than a reminder of how the sainted Beatle could rarely muster an interesting melody without McCartney’s help, and this Lennon heavy dirge plays squarely into that. It’s lifted somewhat by Ryan’s dad adding some George Harrison like slide guitar sounds, but overall, it just doesn’t conjure the same levels of retro joy as the rest of the disc. Still, one misstep doesn’t do too much overall damage, and with it being handily placed at the end, it means the general listening experience doesn’t lose any momentum.

Released at a time when the global health crisis was still ongoing and just a few weeks after the then American president Donald Trump incited a riot, we all needed fun more than ever. Created with a big heart and firmly set on reawakening good times, ‘What A Rip’ certainly hits the spot. Pastiches or not, this is an excellent release with plenty to entertain. You don’t even have to be a fan of Ryan’s other records: for lovers of The Lickerish Quartet, The Genuine Fakes and other bands who love to replay 70s sounds through a revisionist 90s prism, this comes highly recommended.

Read a review of ‘Up From Here’ here.