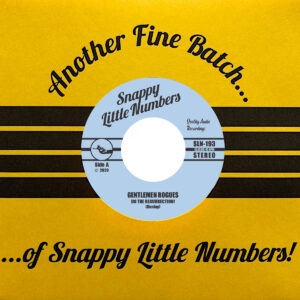 The band closes a fraught 2020 with a couple of new songs that continue their run of enjoyable recordings. The self penned ‘Do The Resurrection!’ kicks off with a barrage of ringing guitars powering an intro that carries faint echoes of an old Sugar number, before settling into a verse that combines the sounds of classic Soul Asylum with the noisier end of The Connells. As before, the 90s nostalgia comes thick and fast and the riffs are brilliantly constructed. Over the wall of sound, frontman Danny Dunlap offers a very melodic vocal that bristles with energy throughout. His performance has the kind of gravitas you’d expect from a performer with four times his level of fame, and by the time he wrings a great vocal hook for all it’s worth, this feels like the kind of number you’ve always known. There’s time enough within its concise three and a half minutes for a little deviation, too. While the track works largely from tried and tested ideas Dunlap has been slowly perfecting over the years, a somewhat wonky tribute to Thin Lizzy via a lead guitar break is most unexpected. In short, if you’re already familiar with Gentlemen Rogues, there’s plenty within this retro belter you’ll love right from the very first play.

The band are no strangers to a cover tune, having already put their own stamp on works as diverse as Erasure and Morrissey, but on this disc’s flip side, they attempt to shake up the idea of reworking other people’s material by sticking various tunes through a musical blender. ‘Bloody Rudderless (In Ursa Major)’ takes three alternative classics and bolts them together in a Frankenstein-like creation and, miraculously, creates a new classic. The intro from Superdrag’s ‘Destination Ursa Major’ is cranked with intent before leading into the vocal melody and lyric from the Lemonheads classic ‘Rudderless’. Once you’ve heard this, it’s impossible to go back to the Superdrag number without hearing elements of Evan Dando’s composition muscling in, so they’re definitely onto something. Hearing ‘Rudderless’ played in a more aggressive style actually sounds brilliant, and the way the fuzzier end of the riff slides seamlessly into a verse or two from Superdrag midway feels incredibly natural. If that weren’t enough, the intro riff from My Bloody Valentine’s ‘When You Sleep’ makes a belated appearance to add some extra melodic texture to a multi-layered coda. This, people, is how to reinterpret other peoples’ work. It’s indie rock heaven and needs to be heard by everyone.

It would be fair to say that, in terms of style, Gentlemen Rogues aren’t anything new, but between their own songs’ abilities to bring such a wave of nostalgia and their approach to reimagining other peoples’ works showing a lot more spirit than most, they deserve to be much better known. Along with Dot Dash, they are one of the best band’s you’ve never heard. Make sure you grab a download of these tracks at your earliest convenience.