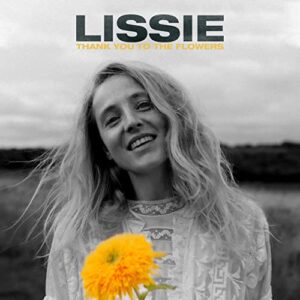 2020’s ‘Thank You To The Flowers’ brings together a handful of well chosen covers. It isn’t Lissie’s first brush with other peoples’ material (she released an enjoyable covers EP ‘Covered Up With Flowers’ in 2012 and a hugely unexpected reworking of Rob Zombie’s ‘Dragula’ in 2019), but as anyone who is aware of Lissie’s approach to cover tunes will tell you, a new covers EP is cause for celebration. Her reinterpretations often feel like so much more than a lazy stop gap, or worse, a cash grab for the latest John Lewis advert. She often applies as much musical depth to pre-existing works as she does to her self-penned numbers, and in the main, this EP is no exception.

Arguably the best known of Lissie’s chosen songs, Prince’s ‘Nothing Compares 2 U’ will forever be associated with Sinead O’Connor’s 1990 recording and its suitably minimalist accompanying video. O’Connor’s #1 hit single is arguably the definitive take and, with that in mind, it’s very bold of Lissie to even attempt to rework the song in anything like her own style. As it turns out, her recording is very good indeed, blending O’Connor’s sultry moods with a slightly more modern musical backdrop. A similar minimalism is augmented by a Lana Del Ray-ish layer of echo and a few guitars lend an alt-country spookiness for a great send off. It’s safe to say fans of the song won’t be upset, and in some ways, it’s nice to hear something in danger of being over-familiar played with a slightly different musical slant.

Taking a quiet stance showing off just voice and electric guitar at first, ‘Wrecking Ball’ sounds great in a stripped back arrangement. The guitar lines capture a moodiness that is reminiscent of Charlotte Carpenter’s best works, all the while allowing Lissie’s Stevie Nicks inflected vocals plenty of space to rise to a full on cry. Bringing in the whole band for the second chorus and beyond, very little is done to change the original arrangement, but with such a great and hugely emotive pop song at her disposal, Lissie’s obviously understands there’s very little point in trying to fix something that isn’t broken. A recording full of emotional pull and musical peaks, her performance is amazing – hopefully it will be good enough to attract the ears of narrow minded snobs who couldn’t bring themselves to listen to the original Miley Cyrus recording.

Lana Del Rey’s ‘Change’ is given a brilliant new angle when Lissie transposes the arrangement from piano to guitar, takes a mumbling vocal and breathes a little more life into the words and creates a fine slab atmospheric pop in the process. Again, the guitar lines are more than reminiscent of Charlotte Carpenter’s best works, and in taking modern pop and making it resemble an old Chris Isaak album cut, this quickly becomes one of this EP’s highlights. More fantastic reverb pumps the bitter heart of ‘Bloody Mother Fucking Asshole’, a tune that seems as if it’ll provide more mellow vibes, but actually builds to a furious climax that allows Lissie an opportunity to really belt her lungs. The sparse percussion and Daniel Lanois styled production are fantastic; the vocals even better. There are issues with the song itself – it occasionally seems to want to shock the listener in a very basic way – but any faults lie with the writer rather than Lissie herself. Martha Wainwright’s work, in the main is horrible. The Wainwright family have contributed a landfill’s worth of over-rated junk to the music world over the decades, and this song has nothing that would endear a first time listener to Martha at any time. That said, Lissie’s version runs rings around the Martha Wainwright original and her fans might find some interest in such an angry performance.

Best of all, a version of Paula Cole’s ‘Where Have All The Cowboys Gone?’ replaces the original’s bounce (always an odd contrast to such a pleading lyric) with more of an Americana sound. Crisp ringing chords give a minimalist arrangement a surprising amount of muscle, while soft, almost jazzy drums and a spirited vocal provide the more familiar chorus hook with just enough oomph to direct it more towards the adult pop listener. As with all of the tracks featured here, Lissie’s vocals are pretty much without fault; in many ways, if you’d never heard the song before, it could easily pass for one of her own. By reinventing this old hit, Lissie actually reminds you that this was always a great song and if this inspires listeners to dig out that long neglected copy of Cole’s ‘This Fire’, then her work is done.

‘Thank You To The Flowers’ feels like a massive sidestep after the pop-oriented ‘Castles’ LP, but in so many ways – as its title suggests – it acts as a perfect counterpart to 2012’s ‘Covered Up With Flowers’. The performances are largely terrific and the constant willingness to explore all kinds of pop from across three decades shows an artist with far reaching tastes. Between the earlier Metallica and Rob Zombie covers and some of the finely tuned pop on her albums of original works, you’re often left with a feeling there isn’t much that Lissie couldn’t have a stab at and come out winning. This EP more than confirms that. A highly recommended listen.