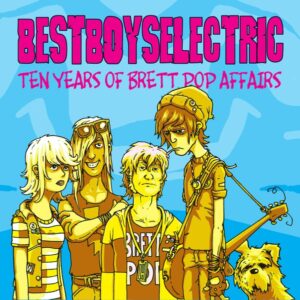 Best Boys Electric’s 2016 EP ‘Brett Pop Affairs’ flaunted the band’s love of 70s power pop, glam and 90s indie to create a four tracker that was maybe a little ramshackle, but enjoyable. What the tunes occasionally lacked in finesse, they made up for with a truckload of enthusiasm. Regardless of what you thought of the end result, you couldn’t say it wasn’t made with love.

A similar approach is applied to their 2019 vinyl long-player, ‘Ten Years of Brett Pop Affairs’, a sixteen track romp through the band’s love of all things retro. The four EP tracks are reprised here – and as part of a broader musical landscape, they sound a little better – but for those already familiar with the band, naturally, it’ll be the newer tracks providing the biggest draw.

Taking a massive cue from Cheap Trick’s ‘Hello There’, the short and spiky ‘Hello’ introduces everyone to the band with a bunch of punked up power pop chords, a lot of musical stops and a cheeky greeting, before flowing into ‘Saturday Night’, a bouncy and fun tune that takes Best Boys’ previous power pop sounds and sharpens them considerably. The no nonsense riffs echo old Cheap Trick tunes once more, although when coupled with a dual male/female vocal, keener eared listeners may even be reminded of the overlooked (and sadly forgotten) Other Star People. In terms of hooks, it’s all very simple stuff indeed, but it’s a hard heart that could resist singing along as the band champions the feel good nature that a Saturday night can bring.

There’s an odd 80s vibe running through ‘Mayday’. It’s likely the band were aiming for something Sparks-ish (they’ve all gone on record as being big fans), but the track occasionally has more of an OMD vibe surrounding the chorus, while the music is a busy mix of 80s alt-pop and odd power pop. The way a busy guitar solo is dropped into something that at first feels as if it should be dominated by synths only confirms the band’s restless nature. As quirky as it is, a few plays should mark this out as a highlight for many. A genuine highlight, ‘Always Be Your Friend’ uses a heavy synth pulse and repetitive vocal for maximum effect. To begin with, you might expect a call and response vocal to be the track’s best hook (especially considering unexpected words like “roadmap” are used!), but as the number progresses, stomping, glam rock elements very much win out. Overall, this has the making of one of Best Boys’ best songs.

Less fortunate, a keyboard based tune about being an astronaut saving the universe (‘Astronaut’) stretches the band’s whimsical goodwill a little too far as they venture into something that could be seen as homage to The Scaffold and the Bonzo Dog Band, yet somehow ends up sounding like a bad Blur b-side. Luckily, the rocky ‘Guilty of Murder’ quickly sets everything back on track with a great riff, a greater bassline and some unexpected sax. With an energetic verse and a simple chorus hook, it’s easy to compare this to Fountains of Wayne – and as such, is a definite recommendation for first time listeners along with ‘Saturday Night’.

If anything, this is an album where the eclecticism rarely lets up: you’ll also discover a silly interlude with a guy singing like a robot on an answering machine (‘King of Heavy Metal’), full on acoustic whimsy on a throwaway ditty about being a fish (‘Bubbles’; reminiscent of something that might have been a b-side from a Supergrass CD single) and ‘Crazy’ – a shameless homage to Bay City Rollers and teen glam pop, complete with screaming crowd overdubs for that all-round authenticity. While this tune might wear thin in time, it’s worth hearing for mechanical bleeping keyboard sounds that are never a million miles away from something Ron Mael might’ve enjoyed in the late 70s.

The EP had a rough and ready charm, but at it’s best, this album is so much stronger, suggesting Best Boys Electric have come a long way – both musically and in a song writing capacity – during the intervening three years. Packing sixteen tracks into just under forty minutes and with at least five alternative pop classics to be discovered along the way, ‘Ten Years of Brett Pop Affairs’ is one of 2019’s most fun records.

Read a review of the ‘Brett Pop Affairs’ EP here.