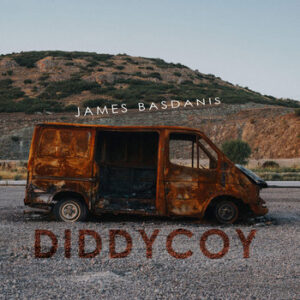 A rattle; a cranking sound that suggests revving; muted guitar sounds set against an ominous quiet… At the outset of this EP from fusion musician James Basdanis, things start so disjointedly they give no obvious clue as to where the music will go. After a little more gearing up, Basdanis turns out a few jazzy guitar notes in a melody that strongly suggests a Mediterranean slant, but this isn’t obviously something a world music buff might gravitate towards. Nor is it especially “jazz” in the most traditional sense, but certainly takes in elements of both. Hearing it for the first time, the slow, unfolding melody suggests something from the Frank Gambale back-cat mangled with glee by a Les Claypool project.

That should be enough to prick the ear of the more adventurous listener, so, by opening things in an indirect manner, Basdanis has been smart. By the time he’s reeled everyone in, it’s time for a repetitious, yet strong melody – part jazz, part soundtrack infused atmospherics and often with his clean guitar upfront – to do business. …And so, the EP’s title cut works through a rhythmic groove, slowly adding extra layers as it goes. What transpires around the ninety second mark is a change in tone to introduce an angrier, rock-tinged guitar before dropping back to the original jazz tone. A spacious interlude allows a great bass sound to underscore a far more trad sounding “desert film score melody”, taking the listener further into a wandering instrumental, only to have its spell broken by a howling feedback drone. With everything coming together at the climax, the tune’s fusion of jazz, rock and soundtrack tropes presents the trio of Basdanis, Nick Tangas (bass) and George Memos (drums) in fine form.

A touch more accessible, ‘Unbalanced’ creates the release’s highlight by dropping an incessant jazz funk groove, over which the guitarist lays various muted notes while a hard bassline drives a great melody. In some ways, it sounds like a souped-up theme for an old spy thriller – something reinforced by a fantastic use of reverb on the guitar. The groove is easily locked down while Basdanis offers extended solos that fuse moments of 60s psych and classic jazz, always presenting something that’s equal parts challenging and melodic. Changing the mood yet again, ‘The Conium’ employs an extensive use of samples and a deep, almost trip hop-esque rhythm to set the next melody in place, before branching out to demonstrate a much more rock oriented slab of instrumental prowess. The main melody quickly works a circular riff – this time employing a fuzzy rock tone – around a heavy drum. Then at the halfway mark, everything drops away. Basdanis indulges in a few guitar runs that perhaps suggest a love of early Santana, but never truly loses sight of his world music love, and finally, the tune’s core riff returns, much harder and heavier before. With the music working a hard power trio sound, a final impression is left by an overdriven guitar tone – wavering between hard rock and blues, though still delivering something that could lapse back into jazz at Basdanis’s will.

With an equal platform given to melody and invention, this jazz fusion release isn’t just for the fusion buffs. It could appeal to those who like atmospheric soundtrack works too, but interestingly, it should be heard by those who devoured the many higher profile rock guitar instrumental albums back in the early 90s. Yes, it’s jazzier than a lot of those and a little less direct, but during ‘The Conium’ especially, Basdanis plays with enough weight and presence to at least pique the interest of the more open-minded rock fan. Overall, these three pieces showcase an entertaining and broadly talented musician and arranger. Although the short playing time can make the release feel as if it’s merely a sample of a much bigger work, the ‘Diddycoy’ EP is still a highly recommended listen.