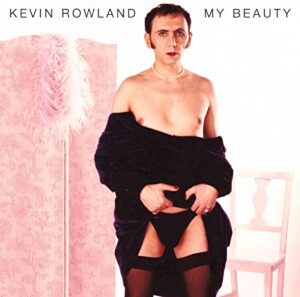 Picture the scene: the twentieth century is in its death throes. Britpop is over. Most of the Seattle bands have stopped being headline news. Nu-metal is a thing. Eminem has proven that Beastie Boys don’t have the monopoly on saleable white rap. The Red Hot Chili Peppers have parted company with Dave Navarro, welcomed back John Frusciante and begun a slow journey into mediocrity. For the first time in a few years, the musical landscape doesn’t seem to have a dominant force.

What better time for the return of Kevin Rowland? Here was a man who’d never really looked at music trends, preferring instead to record whatever felt natural at the time…and to hell with the consequences. ‘My Beauty’, a collection of kitschy cover tunes released in the summer of ’99, found Kevin swimming against the tide harder than ever. Ten years after the relative failure of ‘The Wander’, Rowland reinvented himself yet again and with the support of Creation Records’ Alan McGhee and a huge orchestra, he crooned his way through a brilliant – though disparate – selection of other people’s songs, taking the works of The Four Seasons, George Benson, The Beatles and Burt Bacharach and moulding them in his own style. Unfortunately for Kevin, that album drew more attention for its sleeve than any of its contents. Most people saw ‘My Beauty’ and Rowland’s fashion statement in the pages of the music press, but few seemed to make it any further. Ultimately, the album was not a great success at the time and instead of being allowed a quiet dignity in defeat, ended up being derided on a regular basis by many internet users over the following decade.

It’s time to re-appraise ‘My Beauty’. Almost every moment of the album is warm, lavish and musically rich. In vocal terms, Rowland is at his peak – rarely as shrill or affected his younger self, yet still completely recognisable as the 80s legend by even the most uneducated ear. The use of a few lower registers gives his performances a real maturity and the excessive use of strings throughout suggests a body work that was anything but a tossed off piece of ephemera. ‘My Beauty’ is many things, but it’s…quite something.

Never is this more obvious than on a reworking of The Four Seasons’ ‘Rag Doll’ where the original’s punchy rhythmic stance and taut harmonies both give way to a world of very smooth orchestrated pop. By stretching the song over a truly epic six minutes, Rowland really makes this 60s hit his own. A landscape of strings slowly rolls out, making great use of an extended intro as it joins a lone piano plunking out the instantly recognisable musical hook. Then – boom – a very sixties guitar and Carol Kaye-inspired bassline appear, making the richness of the recording obvious for all to hear. Making everything even more grand, Kev’s best croon is underscored by operatic backing vocals throughout – the kind of touch that nobody really expected – and all before introducing moments of mournful harmonica that sound more in line with a soundtrack for a Western movie and, eventually, a lead guitar from the early 50s. In terms of kitchen sink arrangements, it’s pure gold. Also in the top tier of material, Rowland applies his unique vocal style to a fine cover of The Beatles’ ‘Long & Winding Road’ where the strings weave in and out of an arrangement that fuses supper club kitsch and rich pop. The warm bass takes charge, underscoring an impassioned vocal throughout; the strings swoop and dance and eventually Kev’s vocal warbles strike out against a collection of stabbed piano, vague reggae lilts and an underused harmony. It isn’t quite as out there as ‘Rag Doll’, but its a cut above most covers of this well known song.

Although a little more sedate, ‘Daydream Believer’ showcases some great work by the session musicians, while a slightly off-kilter lead vocal occasionally interjects with things that sound like ad libs, but as anyone who has heard Dexys’ ‘Projected Passion Revue’ will know, almost all of Kevin’s vocals are meticulously planned beforehand and it should be assumed that this is no exception. Burt Bacharach’s ‘This Guy’s In Love With You’ comes a little too close to crooner territory at times, but between some fine strings and the performer’s obvious love for the song, manages to more than hold its own, while a take on the Hollies’ ‘I Can’t Tell The Bottom From The Top’ offers some exquisite retro pop, injected with Rowland’s love of soul-inflected sounds. Firmly tapping into the song’s swelling arrangement, it features ‘My Beauty’s finest vocal performance.

What’s also clear is that Rowland is never shy on putting his own stamp on the material lyrically. The Squeeze hit ‘Labelled With Love’ re-imagines the song’s dishevelled heroine as a down on her luck cocaine fiend, something that’s actually alarming after decades of familiarity with the Difford/Tilbrook lyric and ‘The Greatest Love of All’ (yes, the Whitney/George Benson hit) comes with a spoken pre-amble with unexpected expletives that’s so typically Kevin. Placed at the front of the album, his spoken words jostling against a musical world about to unfold suggests that ‘My Beauty’ is a covers album like no other. Without seeing the tracklisting beforehand, there’s really no second guessing where Rowland will take you next; you just have to trust – to believe – and go with him.

Having spent years in an out of print limbo, the album received a twenty-first anniversary reissue in the summer of 2020. As far as reissues go, this was long overdue, but the fact that the album was given a vinyl release debut and a bonus track in the shape of Springsteen’s ‘Thunder Road’ makes such a reissue vital. ‘Thunder Road’ was scheduled for the original release and even made it as far as promo stage before being dropped at the eleventh hour. Decades on, fans are able to marvel at one of the most inventive covers ever, as Springsteen gets an orchestral overhaul. Extensive use of harp gives the musical melody an almost fairytale feel – perfect for the story in hand – while the omnipresent strings and 50s guitar twang give a really tasteful send off to a much loved song. Rowland, meanwhile, grabs the lyric and runs with it, resulting in a couple of moments having the kind of relentless power heard in Dexys classics like ‘Until I Believe In My Soul’ and ‘Liars A To E’. This is the kind of cover that needs to be heard by everyone, if you don’t get Kevin Rowland after this, you never will.

Timing is everything, as they say, and the fact that the reissue came at a time when ideas of gender fluidity and individuality were beginning to be far more celebrated than in 1999, this could only help ‘My Beauty’. A selection of recordings as eclectic as you’d expect, this album seemed out of place in the 90s (at least in terms of what most considered “cool”), but hopefully, decades later, people will make it past the sleeve, explore the album itself and realise that its eclectic material, smooth charm and expensive sounds hold a great deal of magic – and so much genuine beauty – that it’s almost unnerving.