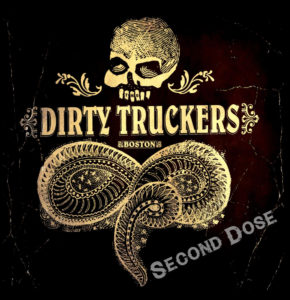 Boston’s Dirty Truckers have never been shy of showing a cheeky side and applying that to some good old-fashioned, trashy riffs. This has rarely been offered in such a direct way as on ‘Little Mine’, the lead single from their 2020 compilation disc ‘Second Dose’. It’s barely two lines in before frontman Tom Baker sings of someone in their “birthday suit” before applying that image to “a twinkle in your eye”. Granted, it’s merely saucy and certainly not on the same level as David Coverdale singing about leg-spreading less than a minute into the Whitesnake debut LP from ’78, but there’s something about this sexual memory that sort of sets the trashy tone for the following thirty minutes. In terms of music, there’s plenty within this tune’s Slim Dunlap meets Keef Richards schtick that’s classic Truckers. If anything, its combination of relentless pace and unfussy backing vocals makes everyone sound more energised than before: the riffs are ballsy; the lead vocals husky…and combined, the bar-room sound really flies. It sounds so much like classic Truckers, even a one line hook can’t hold it back. Sliding into ‘Hotel Highway View’ the disc effectively opens with a massive one-two suckerpunch. A number that highlights John Brookhouse’s sleazy guitar, the band deliver a three minute musical love letter to Johnny Thunders. It’s bread and butter stuff for them, but sounds great. If you love that grubby rock ‘n’ roll style, you’ll definitely find yourself being swept along by the band’s energy.

‘Back To Back’ (originally from 2008’s ‘Loose In The Joints’) offers a touch more melody throughout thanks to the lead guitars adopting a country-rock twang, used most effectively when linking the verses. Chorus wise, there’s just as much to love as some carefree gang vocals evoke Bash & Pop at their most hooky, while Baker even manages to capture just a little of the power pop cool of yesteryear. Catchy enough to be a digital single, its combination of big riffs and bigger melodies almost sounds like something Graham Parker could have written. The band’s real love of The Replacements was always clear, but on parts of one of this disc’s stand-out ‘Feedback’ (originally from 2012’s ‘Tiger Stripes’), it’s even more obvious since Baker adopts a sneer and vocal meter that, in a few places, is almost a perfect copy of ’14 Songs’ era Paul Westerberg. As always, though, Dirty Truckers sound better than mere copyists and this tune’s combo of ringing guitars, hugely confident vocals and insanely catchy hook seem geared towards your best summer playlist. Elsewhere, ‘Not Missing A Thing’ brings a supercharged collision of Americana and power pop sounds; ‘Help You Ann’ could easily slide into The Hives ‘Hate To Say I Told You So’ at any second (deliberately or otherwise, the style suits the band) and ‘Rise & Fall’ (originally from 2001’s ‘Bush League Romance’) offers little more than Truckers on autopilot, but even that has its own charm due to the twin guitars lending a fine, though trashy, melodic counterpoint. A track with the potential to catch the ears of the pop-rock fans, ‘Arms Length’ gives drummer Dave Foy a bigger workout during the intro, promising something heftier than the pop-rock swagger that quickly emerges. The number comes into its own via a few whoahs and a much poppier melody on the chorus. This occasionally gives a concession to something a little more 80s and there’s a pleasure in hearing the Truckers attempting to spread their musical wings, even if their long-term followers will always gravitate more towards tracks like ‘Hotel Highway View’.

Clocking in at almost five and a half minutes, ‘Sixteen Blue’ is almost prog rock by usual Dirty Truckers standards, but this Replacements cover (also recycled from the ‘Bush League’ days) really lends this collection a welcome contrast. They don’t really change the original material, but slowing down allows the band to stretch out and it’s electric/acoustic mix appears to be a pleasing homage to the song’s original performers. A keener ear might even hear something that would also have suited labelmates Watts. It suits the Truckers perfectly, of course, with the dual guitar sounds from Brookhouse and Tad Overbaugh ambling behind the especially narrative lyric. It’s a little shinier than some of the Truckers other material too, though any perceived sheen purely comes from an especially bright guitar sound. In closing, a cover of Nick Lowe’s ‘Ragin Eyes’ tears through two minutes’ worth of raucous rock ‘n’ roll. Replacing Lowe’s original thin sounding power pop with something more aggressive, this cover almost seems to recall the sweat and sawdust of Georgia Sattelites but reimagines that though the usual prism of Replacements and early Soul Asylum obsessions. In terms of cover tunes, it’s the kind of thing Dirty Truckers could knock out in their sleep, but at the same time, it manages to retain a genuine appeal for lovers of no nonsense bar-room rock.

…And that’s it. In approx half an hour – and by 1990s CD standards, about half an album – ‘Second Dose’ takes many Replacements-esque tropes, a little skinny tie new wave and a whole world of sass to serve up a whole world of excitement. This is a great primer for the first time listener. If that applies to you and you’ve ever had a passing fancy for Westerberg/Replacements or Izzy Stradlin (or other artists with a sizeable bar-room swagger), it’s pretty much guaranteed you’ll love what you hear.