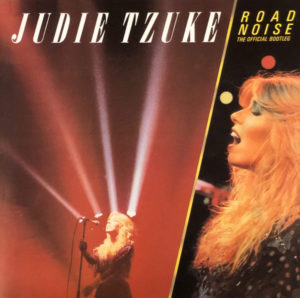 What’s more, it wasn’t issued as a quick get out or obligation either. Judie had come to the end of her contract with Elton John’s Rocket Records in 1981 and not long signed a three album deal with Chrysalis by the time the live album hit the shelves. Coming right in the middle of a short tenure for a new label, there’s no way ‘Road Noise’ can be seen as an easy contract filler. In retrospect, though, it does mark the end of the first phase of her career, since ‘Ritmo’ – her fifth studio album released the following year – marked a dramatic shift from rich, adult pop into a much thinner and much shinier synth-oriented sound.

With regard to ‘Road Noise’, the listener is given every confidence in Tzuke’s session band straight from the moment they hit the opening of ‘Heaven Can Wait’ (from the then recent ‘Shoot The Moon’). In particular, the rhythm section of John “Rhino” Edwards (bass) and Jeff Rich (drums) are especially sharp. Much as he had on the studio recording, Rhino hits upon a really funky riff, but if anything, delivers it with much more of an intensity. Tzuke’s voice is a little low in the mix throughout, and as the band segue into the slightly rockier ‘Chinatown’, it becomes more obvious why the “official bootleg” appendage has been used. The recording is somewhat echoey, almost as if recorded by a fan in the third row. Somehow, though, its rough around the edges style lends so much of its own charm. Much like Tzuke’s slightly warbly voice, it’s completely real. Between more upfront bass work and a particularly rocky finish, this opens this record with an effective one-two punch for the record, highlighting both a fine singer and a superb band.

The first half of the set brings a succession of classics: The almost Police-like ‘You Are The Phoenix’ shows Rich working a mean hi-hat and the rest of the band hitting a real groove; the jittery ‘Sportscar’ showcases a crying vocal as well as demonstrating guitarist Mike Paxman’s abilities at slightly jazzier riffs and pianist Bob Noble’s natural style. With regards to ‘For You’, it might have sounded better had the band worked at a new arrangement rather than use various a cappella voices from samples and tapes, but it was never designed to be performed in front of a huge crowd but even as it stands, it shows Tzuke’s lead voice to have a remarkable purity. Those looking for something closer to traditional balladry, a beautiful rendition of ‘Come Hell or Waters High’ (originally from 1981’s ‘I Am The Pheonix’) will lend plenty of consolation. One of the most perfect things Judie has ever recorded, it would’ve been a travesty if the version from this live album fell short somehow, but with a world of sweeping piano melodies accompanied by Tzuke’s high trill and Paxo’s understated lead guitar, it is almost a match for it’s studio counterpart – and every reason alone to add ‘Road Noise’ to your collection.

As good as it is, the first half of the record almost pales into significance once a medley of tracks from Tzuke’s career-defining debut ‘Welcome To The Cruise’ makes an appearance, kicking off the original vinyl’s third side. A thirteen minute workout taking in both ‘Southern Smiles’ and ‘Katiera Island’ works the whole band to the limit and in many ways feels like a centrepiece for the whole live recording, despite its tracks being sourced from four different dates. ‘Southern Smiles’ shows how well the band can tackle light calypso pop (never cool, but in the hands of master musicians in front of a crowd, this recording has a certain appeal), but it’s during ‘Katiera Island’ where the true magic happens. This live recording is especially impressive as the number is given an extended workout, with Jeff, Rhino and Paxo exploring a few jazz fusion themes and showing off some lovely natural tones and moods in the process. Almost as good, ‘Love On The Border’ (at this point still fresh enough to be wet behind the ears), is much tougher in its live guise. For four minutes, Tzuke and her band really rock out – its chorus finds her seriously wailing while the band work through some very confident AOR sounds. As with the studio take, though, its real appeal comes from the verse, where Noble and Rich dictate a poly-rhythmic funk style, almost sharp enough to resemble Talking Heads circa ’79. It’s a sound that never gets old, but what’s perhaps most impressive is that the band are able to reproduce its complexities in a near faultless way.

A double whammy of tracks from ‘I Am The Phoenix’ shows both a rockier and much darker side to the band with great renditions of ‘Black Furs’ and ‘City of Swimming Pools’, but for the more casual listener, bigger enjoyment can be gleaned once Tzuke retreats into a ballad-oriented safe zone. Her most famous ‘Stay With Me Till Dawn’ already starts to feel like an evergreen classic, despite only being three years old and sounds great, while ‘Bring The Rain’ comes with a warmth and beauty that’s almost as fine as the earlier performance of ‘Come Hell or High Water’. Closing a brilliant record, the band take one last opportunity to rock out on a sturdy sounding cover of the blues standard ‘The Hunter’. In many ways, it’s at odds with most people’s thoughts of Tzuke’s work, but the way she belts her voice is actually very natural; it sounds great against a wall of organ stabs and a rigid blues rock riff. Paxman’s clearly relishing the moment too, as he contributes a couple of cracking solos. At the end of an already great listen, Tzuke the pop singer proves her mettle as a decent blues rock vocalist in a very gratifying performance.

As a stock take of Judie’s early years, ‘Road Noise’ isn’t just solid – it’s a remarkable document. Across eighty minutes and seventeen numbers that give an excellent overview of her early (and best) albums, it’s both a reminder of one of the best session bands of the era – both Edwards and Rich were really put through their paces before joining Status Quo in ’85 – and of how underrated a songwriter and performer Tzuke was in her prime. The core of the material on 1979’s ‘Welcome To The Cruise’ (an essential record) and 1980’s ‘Sportscar’ more than show why Elton John was enamoured with Judie as a singer-songwriter, but this live set is a different animal. It’s often far rockier, occasionally jazzier, but pretty much always first rate. If you only ever buy two or three Judie Tzuke albums in your lifetime, ‘Road Noise: The Official Bootleg’ should be a serious contender.

[‘Road Noise’ was reissued as part of Cherry Red Records’ Judie Tzuke ‘The Chrysalis Years’ anthology in March 2020.  Expanded versions of ‘Shoot The Moon’ and ‘Ritmo’ are also included.]