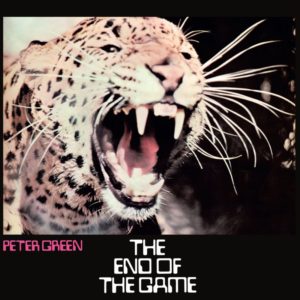 Although ‘Man of The World’ had shown Green in an uneasy frame of mind, things would take a far worse turn in March 1970. Whilst on tour in Germany, a well documented incident with some bad acid would ensure Peter was never the same again. The band’s first recording for the year, another non-album single ‘The Green Manalishi (With The Two-Pronged Crown’), showed a fairly dramatic shift. Although brilliant, the track carried far more of a sinister edge and sympathies towards the burgeoning hard rock sounds of the era with Green’s playing, in particular, demonstrating a far heavier mood than ever before. This single marked a major turning point and just five days after it hit record shop shelves, he quit the band.

Within a month, Peter made an appearance with John Mayall and Aynsley Dunbar at the Bath Festival. He also returned to the recording studio. His first post-Fleetwood studio recordings began as a jam session with friends and huge amount of material was recorded in just one day. Those tapes, after some heavy editing, became his first solo album ‘The End of The Game’, released on Reprise Records in December 1970.

To create a new solo release in such an unconventional manner must’ve involved a certain degree of panic from the label. They had a star on their books – albeit a troubled one – and this might have even been the last time he even picked up his guitar. It’s easy to imagine, with his cult status at that time, they were hedging their bets since any product featuring Peter Green automatically had an audience. Fleetwood Mac, meanwhile, were a band without an obvious leader; they could’ve easily sank without trace. At the very least, they could have turned out to be an unsaleable commodity, much like The Doors following the death of Jim Morrison. [As it turns out, you might say that Fleetwood Mac turned out okay without Peter’s guidance. It took them a while to find form, though; their ‘Kiln House’ LP, released a few months before ‘The End of The Game’, is a truly terrible record.]

As you’d expect from an album made in a cut ‘n’ paste fashion from improvised jams, ‘The End of The Game’ is full of twists and turns. At the point ‘Bottoms Up’ fades in, the record actually begins with something fairly conventional, so at least Reprise Records put some thought into sequencing the bits of acquired music. It begins the album with a feeling of darkness, but also one full of melody. Within seconds, bassist Alex Dmochowski asserts himself as a great jazz player. His playing is so high in the mix you can actually hear his fingers as they thud against the strings. Drummer Godfrey MacLean seizes upon the jazz rock groove but holds back, making things appear like a jam between the bass and Green’s guitar work. With a lot of echo, reverb and wah-wah pedal in tow, Green appears to be channelling the ‘Green Manalishi’ of a few weeks earlier and then applying that to the kind of freakout you’d find on a Cream live album. He’s attacking his guitar, throwing all kinds of musical shapes and everything comes back with a looseness, but also a lot of power. Almost every moment of this opening piece has something to recommend it, whether it’s the Jack Bruce inspired bass lines, the tough lead guitar work or the electric piano that occasionally cuts through to remind you that you’re eavesdropping upon something much bigger than a power trio. It’s with the last section, though, that any true magic occurs (and as such one of ‘The End of The Game’s genuinely brilliant moments) as the band of musicians latch on to a blues jam that has such a heavy funk undertone. While it takes a while to emerge, when moments like this actually hit, you can tell they were just absolutely loving being in the moment.

The beginning and end of ‘Burnt Foot’ fuses jazz and acid rock in a way that brings out the best in everyone. The mood is distinctly jazz-fusion, as Green noodles the same refrains quietly throughout, leaving Dmochowski to carry the mood. His bass work is absolutely stunning; there are fat, Jack Bruce-esque jazz lines, an even bigger ascending scale used to give extra muscle and by the time the band lock into a heavy funk groove (on the rear end of a hefty drum solo), his playing is absolutely flawless. One listen to his work here and its more than obvious how he ended up in an incarnation of the Zappa band a couple of years on, adding his talents to both ‘Waka/Jawaka’ and ‘The Grand Wazoo’. As for Green, he offers some decent wah-ed guitar, but nothing that would set the world afire. Since this has been taken from a much longer jam, it’s impossible to tell what he’d played immediately prior to this, so we can’t just assume he wasn’t putting in the hard yards; as evidenced elsewhere on this LP, he could still play up a storm if the mood took him accordingly.

A particularly odd snapshot, ‘Descending Scale’ shows the musicians working in even more of a free form framework. The rhythm section quickly takes the lead, as drummer Godfrey MacLean rattles his toms apace while Dmochowski throws out flurries of muted notes. On the piano, UK rhythm and blues star Zoot money hammers at the bottom end of his instrument as if scoring a crime movie. It’s almost a minute and a half before Green is even heard. Eventually he chimes in with a few sparse notes, but eventually he hits upon a couple of really angry, acid rock riffs. Doing so, he inspires MacLean to smash the living hell from his kit. Almost as quickly as this takes shape, it dissipates. It’s almost as if Green had a flash of inspiration and then forgot what he was doing. The result of this means the track takes an entirely left turn into a jazz score for a seventies horror film. It becomes almost as much about what the musicians don’t play. The bass offers a few deep notes; the drums rattle ominously; Zoot plonks at various random notes. It almost becomes like a broken but beautiful moment when, from somewhere in the wings, Green’s guitar howls with occasional blues drenched notes.

‘Timeless Time’, meanwhile, is little more than an interlude. A few bass notes introduce the piece, before Green – placed over in the left speaker channel – plays very mournfully. Everything is absolutely minimalist, with the majority of the two and a half minutes concerned with Green making his guitar cry under a few cymbals. At another recording session, this would have remained unheard by anyone until the inevitable release of an anniversary edition or box set. In the context of ‘The End of The Game’ – and upon release, that context would have been everything – Reprise were clearly clinging on to something they felt had the faintest connection to ‘Albatross’. It’s nice, but fairly inconsequential. In a change of mood, at the point we join ‘Hidden Depth’, Zoot has taken the reins and he’s banging out some hard chords, briefly suggesting he’s trying to steer things towards his rhythm and blues comfort zone. Green appears to be responding well, playing in a busy yet melodic style that actually compliments everything around him. Before long, the rhythmic structure falls away, leaving a spacious new age jazz melody. The bars are dictated by the piano; the rest sort of falls around those sparingly used chords. MacLean demonstrates a strong ability to play in a loose jazz style, while Green alternates between the angelic sound he gave ‘Albatross’ and a wah-wahed, Hendrix-ish blues edge. Like ‘Bottoms Up’ it’s one of those times where everything seems to happen serendipitously. Nobody is attempting to upstage anyone else, they’re just flowing…and as listeners, this only creates something oddly beautiful. It helps if you have a jazz-tuned ear, of course, but for anyone unfamiliar with Green’s post-Mac output, it might provide an interesting listen.

The title track is perhaps the album’s most unsettling piece. Never settling upon any kind of melody, it fills the better part of five minutes with the kind of grumbling you might expect from Hendrix and Cream as they pull towards the end of especially vigorous performances of ‘Red House’ or ‘Spoonful’. Despite a clatter of drums and a lack of real direction – the general sounds a band waiting for that next spark of inspiration that might just bring about a genuine groove – a few moments of guitar are notable. Within the first few seconds, there are notes that suggest Peter could break into ‘The Green Manalishi’ at the next turn (and it would have been better if he had), while the very quiet coda carries hints of the sad tones from ‘Man of The World’. It’s somewhat frustrating that neither of these ideas are properly pursued, but that’s the nature of improvisation – sometimes it sparks genius, sometimes not – and, after all, nobody involved suspected they were making an album…

It’s easy to imagine Fleetwood Mac fans wondering what the hell they’d bought when first hearing ‘The End of The Game’ in 1970, and in lots of ways, listening to the album years after the fact can still be a difficult experience. When directly compared to the simplicity and beauty of Green’s previous works, it is very incoherent. Broken even. However, there also remains a lot of power in the barbs of sound and those furious howls of lead guitar that partly make up its musical soundscapes. Even if Green is sometimes in the backseat, his playing still has moments of wonder.
In some ways, ‘The End of The Game’ is more than an album: it’s a snapshot of a moment, or an unsettling document of a man you’re never quite sure will enter a recording studio again. While far better than those two Syd Barrett albums people will insist are brilliant, it’s almost as upsetting in its twisted approach, especially when listened to with the full disclosure of the guitarist’s state of mind at the time. The fact that Reprise Records were able to break down the expanse of music into handy, semi-digestible – and saleable – chunks was a master stroke on their part. In a more modern time, the record company would have likely just shelved the tapes. Decades after the event, the fact that something so obtuse is now a vital part of a complex musical puzzle…well, we can probably say ‘The End of The Game’ is more important than anyone ever gave it credit for at the time.