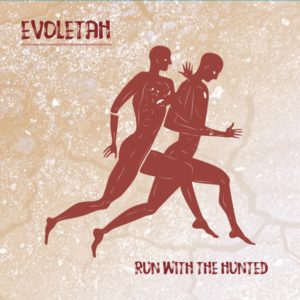 Over the next few years, Matt experimented in his home recording studio. Exploring synth-based sounds, he released two albums as a side-project named The Quiet Room before reviving Evoletah in 2019. Considering Evoletah have gone through some rather huge musical changes over the years, Cahill and his collaborators obviously recognised that ‘We Ache For The Moon’ was a brilliant work and possibly resembled their true musical calling, as their 2020 release ‘Run With The Hunted’ follows a similarly jazz oriented path. It doesn’t always present itself in quite as slick a fashion, but there’s some superb music to be uncovered within its eight tracks.

‘Beguiled’ drops the listener straight into Evoletah’s belatedly found jazz tendencies, with an arrangement perfectly suited to late night listening. An upright bass lends a hefty sound, whilst stringed backing reinforces the smoky feel. Dropping in a sparse piano part and a slightly hushed vocal, it’s hard to believe this band began life as a guitar heavy outfit. As the tune continues, the bar-room jazz is joined by a very European sounding violin and a crying vocal that draws heavily from the works of Paul Buchanan and Jeff Buckley. Although the music is of the greatest importance and Sam Sheffield’s cello fills a great deal of space, it’s Cahill’s vocal that provides the aching heart of the track with a performance that’s just waiting to draw in the listener. He sounds particularly troubled – the voice of a lost soul, almost as if he were the prey of the album’s title.

The title track melds the pop and jazz influences to something that’s far more mechanical, when Evoletah abandon the hazy, late night sounds for something that works a bigger rhythm. For those into the jazzier aspects of the band, a weighty sounding sax takes an early lead while the bulk of the arrangement leans more towards acid jazz, which gives the rhythm section more of a workout. Despite the faster approach to the music, there’s still something rather detached about the lead vocal where Cahill taps into the David Sylvian tendencies of his Quiet Room project which results in a great fusion sound. Overall, this isn’t particularly big on hooks – a brave move for so early into the album – but it soon becomes very clear that ‘Run With The Hunted’ doesn’t want to give listeners too much of an easy ride. As before, this isn’t about immediacy, but always about texture and atmosphere. ‘Look Before You Leap’ opts for something a little more lounge oriented. “Lounge”, in this case, isn’t a slur: the easier style appears to be a natural fit for these musicians. A brilliant piano plays a melodic but strident riff beneath an Art Blakey inspired drum part, while guest performer Heather Christie’s vocals have the manner of someone serenading an especially hazy audience. Cahill’s guitar accompaniment is understated but vital and a wavering trumpet fleshes out a strong but easy melody. There are faint echoes of past Evoletah works brushing alongside a smidgeon of influence from George Michael’s ballads and while the end result could be seen as a little more of an acquired taste, the way it all comes together seamlessly, you might wonder if Cahill is actually destined for a residency in the basement of a jazz club…

‘Boxing Shadows’ works the strings alongside a few bristles of acoustic atmosphere, before a busy piano leads the way through some sophisticated adult pop. It’s one of those tunes that seems to start well, but then has nowhere important to go – despite flourishes of trumpet and a fine vocal, it isn’t as interesting as the rest of the album. It’s nice to hear the band trying something a little busier, but it sticks out half a mile given that most of this elpee is so laid back. Luckily, the mood then shifts towards something more gothic. An album highlight, ‘Haunted’ uses synthesised strings and upright bass sounds to weave something with a much darker feel. The way the bass is used in a percussive way is especially effective, while the presence of hard plucked acoustic strings adds a real texture. Although the vocals are recognisable as those from Evoletah’s past, huge spaces between each line and an extra sadness gives a feel much closer to the coldness of The Quiet Room, firmly linking an overlooked side project with Cahill’s main musical outlet. Despite many strengths, there’s also something a little more unsettling at play here. This is more than confirmed once the number denies the listener any kind of expected climax – everything instead just comes to an abrupt halt. Such a stylistic choice is firmly at odds with the way the album generally seems to flow, but it doesn’t damage an otherwise excellent number. A calmness descends during ‘A Still Heart’ via a soundtrack-like piano score. This acts as a backdrop for a rich vocal that seems full of hurt. Utilising more of those sparse techniques from The Quiet Room, Cahill sounds great in duet with guest vocalist Shanna Ransley and at the moment their voices blend, the cold balladry gains a fragile emotive quality, enough to win the hearts of most listeners.

At the point lots of vinyl LPs from the 70s and 80s were prone to taking a dip somewhere near the end of the second side, ‘Run With The Hunted’ actually offers another highlight, as ‘For You’ works a repetitive piano motif, a few echoing guitars and a sad vocal to brilliant effect. Although a vocal takes the bulk of the musical weight throughout, the lasting impression is created through the use of minimalist guitar sounds with a little reverb and the possibility that this sounds like a discarded idea from the Peter Murphy universe. It’s brilliant; it’s cold, stark and almost without any real musical peaks, but brilliant all the same. Finally, ‘Hell Or High Water’ fills almost six and a half minutes with a blend of jazz, folk and retro adult pop. Heavy strings lay the foundations of a great melody, while the rhythm section fall into a groove that’s very 90s influenced. Less jazzy than some of Evoletah’s best tunes, there’s something here that sounds like it’s taken the guts of Peter Gabriel’s ‘Mercy Street’ and re-purposed them for something new. The arrangement builds slowly over the first couple of minutes, first showcasing the drums, then soaring guitar lines and eventually bringing in a muted trumpet. By the time the band are entrenched in the main groove, you might even hear traces of Robert Plant’s rootsier works in a couple of spots – the point is that most people, if they’re of an adult pop/rock persuasion, will find something familiar within this closing number. Regardless of any influence vs. originality, it’s hard to find fault with the end result. This track feels very different to the jazz moods of just forty minutes earlier, yet at the same time feels like a natural way to end this album, with a desire to keep looking forward across a musical horizon which, for Evoletah, appears to be expanding.

Like those great, arty records of the 70s, this album’s best qualities show themselves gradually. Each listen provides a richer experience and although there are great individual moments, it’s when heard as a whole that ‘Run With The Hunted’ is best appreciated. Although a little harder to appreciate than ‘We Ache For The Moon’, it is a mature work that very much expands on Evoletah’s jazzier tendencies and soundtrack like qualities, giving fans of soft jazz and atmospheric pop plenty to enjoy in the longer term.