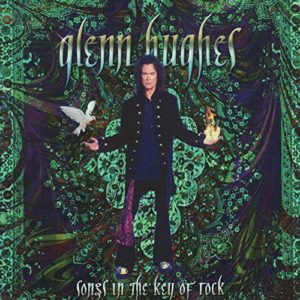 Time has been incredibly kind to ‘Songs In The Key of Rock’. It isn’t as varied as some of Glenn’s past works, but its best moments offer as many thrills as his strongest recordings, pretty much always showing a first class performer absolutely loving his job. In taking its title almost directly from Stevie Wonder’s classic ‘Songs In The Key of Life’, Hughes makes no attempt at hiding this album’s celebratory nature but, unlike a couple of previous recordings, fans won’t find too many soulful tunes hidden within. As the title suggests, this is a record truly carved in rock, with Hughes and his backing band opting for maximum punch almost throughout.

The chunky riff-laden ‘In My Blood’ gives fans of Hughes’s screaming edge plenty to enjoy as the album kicks off with a relentless rocker that sounds very retro. It’s a great track despite playing it safe, as Hughes very much flaunts his past with Deep Purple on a number loaded with Hammond organ swirls. It never reaches full on Purple pastiche, though, as a very 90s influence informs the chorus, making everything sound more like a cousin to something from 1996’s ‘Addiction’. In terms of “Purple pastiches”, ‘Gasoline’ has that remit very much covered with three minutes of high octane rock that never feels a million miles away from the classic ‘Burn’ (which featured Hughes in a prominent role) or the 90s deep cut ‘Fire In The Basement’ (…which didn’t). So much of this comes from sometime Impellitteri man Ed Roth, who spends a chunk of this particular tune absolutely hammering at his organ, but guitarist Jeff Kollman isn’t entirely shy of channelling Deep Purple in his chosen riff, even if it gets recycled in a slightly heavier fashion. Hughes, meanwhile, doesn’t hold back – he relishes this opportunity to cut loose on a massive performance and although it isn’t quite as big as a couple he’d later give with Black Country Communion, thankfully, it’s always got one ear on a strong melody. In short, this is a fine retro rocker.

Adapting a hard rock sound to a moderately funky riff, ‘Lost In The Zone’ allows Kollman and regular Hughes collaborator JJ Marsh a chance to cut loose. This also shows off the disparate styles of the two musicians, with Kollman seemingly keen to revisit his past as a shredder and Marsh adding more subtle, almost jazzy textures. Between the two, most stylistic bases are covered throughout the album, but on this track especially, they come into their own while Hughes relishes the chance to deliver a huge full on croon. Somewhere between rock and soul, Hughes finds his natural habitat and with a great musical arrangement meeting a superb vocal, this is very much one of the album’s highlights. Strangely, although not a funk tune per se, it manages to be funkier than ‘Get You Stoned’, a number featuring Red Hot Chili Peppers man Chad Smith. Smith lays down a solid backline which Hughes augments on bass, setting up a strong rhythm section. While it isn’t necessarily one of the album’s best cuts, there’s something about the track’s overall swagger that makes it work well enough and a quieter, vaguely trippy mid section shows a band willing to stretch out. It lacks the genuine hookiness of a couple of other cuts, but Glenn’s in good voice throughout; in many ways, that’s enough to make these four minutes stand proudly.

Between the knockabout hard rock of ‘Standing On The Rock’ and the retro pop rock of ‘Courageous’, listeners are able to experience the two extremes of this album’s sound in very close proximity. The sheer contrast between the two would suggest their adjacent placing in the running order was deliberate. While fans of Hughes’s Purple years and later work with California Breed will certainly love ‘Standing On The Rock’, it’s well played but a little formulaic; ‘Courageous’ is definitely more interesting and although this disc offers more “classic” sounding material, this track is just lovely in the way it fuses a slightly poppier edge into the rock, allowing Hughes to scale back his voice a little. There’s more of an AOR feel, without coming close to anything from ‘From Now On…’ if that makes sense. There’s also soulful edge without even resembling any of Glenn’s Stevie Wonder pastiches; if you’ve ever fancied hearing Glenn tackle something that vaguely sounds like a deep cut from Toto album, here’s your chance.

‘Song For Bonzo’ wears one of influences as subtly as a forest fire in places as Hughes and company embark on a tune that fuses 70s proto-metal with various soul inflected vocals. The love for Zep comes through in about three seconds as drummer Gary Ferguson hits upon a John Bonham groove, augmented by a guitar riff that occasionally sounds like something lifted from ‘Physical Graffiti”. This gives Glenn a great base to work from, and thankfully, he resists all temptation to go all out with a Robert Plant squeal; instead, he delivers a soulful performance that revisits the quieter moments of the Hughes/Thrall album. A more AOR-inflected chorus brings in some harmonies allowing Hughes to channel even more of a melody, before a guitar solo mixes a subtle blues rock vibe and with something from Ritchie Blackmore’s back catalogue. It’s a track that occasionally feels predictable, but there’s no denying it comes with some solid foundations.

Tapping into a heavy blues sound ‘Secret Life’ finds the band cranking something that sounds like Glenn Hughes covering Stevie Ray Vaughan. Bread and butter stuff for these maturing musicians, for sure, but between Kolliman’s brilliant guitar tones, one of the album’s strongest vocals and a few aggressive bass runs, it’s a real cracker. Swapping the blues for soul, ‘Truth’ blends a curly vocal and a soft keyboard based melody across an MOR verse, before dropping into a punchier chorus where things shift further towards a radio friendly sound where rock meets the R&B of 60s Stevie Wonder and Otis Redding. Again, Hughes’s chosen band of session guys excels throughout. With Glenn offering one of the album’s best vocals, it’s somewhat of a disappointment when everything fades at three and a half minutes. The disappointment is short lived, though, as ‘Wherever You Go’ resembles another fine melodic rocker that’s full of appeal right from first listen. It’s obvious greatness very much comes from the melody bearing a closeness to Deep Purple’s ‘You Fool No One’ (whether deliberately or not) and – as you’d expect – Hughes motors through the track almost like it’s already an old standard.

For the album’s most obvious shift from the rockers, ‘Written All Over Your Face’ returns to the sound of 1995’s ‘Feel’, with Glenn and band working a fantastic fusion of soul and rock with a little blues thrown in for good measure. Taking the slower and quieter melodies in his stride, Hughes manages to work his full vocal range into this eight minute workout, moving between the Stevie Wonder inflections of his past with the occasional rock scream bringing things in line with the rest of the album. At every turn, his performance seems both effortless and classic – it’s easily this album’s vocal highlight. Not to take anything away from the band, of course, and when approaching such a melodic and stately tune, everyone is first rate. Ferguson’s lead guitar breaks are at once mournful and celebratory, befitting of such a reflective track; his bluesy tones pull influences from the 70s and 80s in a way that you’d occasionally feel you’d wandered into a Gary Moore performance and the main riff – although very much its own thing – occasionally carries hints of Jimmy Page’s cover of the BB King classic ‘Hummingbird’. A truly lovely performance; ‘Songs In The Key of Rock’ has at least a half-dozen cuts that make it worth owning, but this is really special.

When this album’s full on rock approach works well, it works absolutely brilliantly, but there’s no escaping that the inclusion of a track that takes in the man’s funk influences in a more direct way or a couple of more obvious ballads would have lent these fifty minutes a little more of the diversity that fans expected. That said, almost all of ‘Songs In The Key of Rock’ remains very enjoyable. The overall vibe more than suggests these sessions were as much about musicians cutting lose as delivering great artistry. It isn’t necessarily the best Glenn Hughes album – that accolade would probably go to ‘From Now On…’ or, looking more broadly at the man’s many collaborations, Deep Purple’s ‘Burn’ – but its place within Glenn’s huge and sprawling catalogue shouldn’t be understated.

[‘Songs In The Key of Rock’ is included in the Glenn Hughes box set ‘Justified Man: The Studio Albums 1995-2003, released via Cherry Red/Purple Records in January 2020].