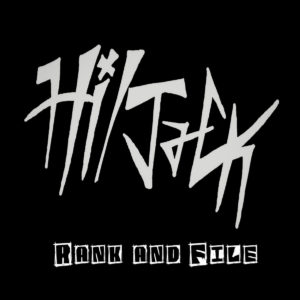 Hi/Jack’s 2016 album ‘No Cover’ is one of those records that lacks something. Across its forty minutes, the duo pound through eleven tracks that blend a garage punk aesthetic with furious metal riffs. They certainly couldn’t be accused of approaching their work in a half-arsed way, but it shows why the guitar/drums/no bass set up is perfect for a purer garage rock sound but not much else. When applied to music that should be given the full bells and whistles approach – as with the semi-metallic influences that infuse most of Max Liam’s guitar playing – the lo-fi approach just sounds shoddy.

In the three years between that full length and 2019’s ‘Rank And File’, unfortunately, Hi/Jack haven’t really improved. At worst, the guitar playing is sloppy; at best, the duo thrash through the material in a way that suggests they’ve recorded everything in a garage rehearsal. None of it sounds especially ready to share with the big wide world.

During ‘I Don’t Wanna See You Anymore’ – a number that occasionally carries a hint of early Bad Brains – Ron “Hi” Terrell plays with force, but unfortunately, his best efforts are counterbalanced by a truly appalling vocal and a repetitive hook that’s just shouted without any real conviction. The thrash metal riffs that open the track show promise, but as with some of Hi/Jack’s prior recordings, prove to be fairly unsuited to the garage rock oriented two man set up. By the time the band have dragged out an idea that barely should have filled a minute into almost three times that duration, it actually becomes a little boring.

The style changes entirely for the expletive filled ‘That Fucking Bitch I Work With (TFBIWW)’, where Hi/Jack hit upon a hybrid of hard rock, punk and even a slither of sleaze. Easily the best number they’ve ever recorded, this tune – and for a change, it is actually fairly tuneful – opens with a great trashy riff which carries through into the first verse. Here, the two men lock into a decent groove and – surprisingly – a strong chorus that brings out the best in their talents. Although approached from a garage perspective, it wouldn’t be a great leap to imagine something similar in the Dead Boys and Hanoi Rocks back catalogues. For the first time here – and possibly ever – Hi/Jack find something that works naturally for them. Although the lyric could be considered juvenile, it actually ends up being halfway enjoyable for the unsuspecting listener with its “fuck you” attitude.  [As if to suggest this is their best track and aimed at alternative radio play, the EP also features an alternate “clean” take, ‘That Crazy Chick I Work With’.]

The feeling of promise doesn’t last… The band’s all-round limitations come across most blatantly on ‘Better Now’ where the band slows from garage punk speed to something in a closer vein to chunky rock. In doing so, the drum sound comes across as a little bit lumpen and the simple guitar riffs have nothing to disguise them. As before, the snarling lead vocal ensures that the duo’s chosen noise still has a sense of bite and a ramshackle lead guitar break has plenty of fire. This isn’t enough to make up for any short-comings. It’s perhaps most unfortunate that it’s been chosen to close this release, since lasting impressions can be as important as first ones in some cases. …And in this case, listeners deserved more than third rate noise to associate with this EP.

This is an EP that has plenty of enthusiasm, but unfortunately, not so much in the way of good songs or any long lasting appeal. Hi/Jack sound like one of those bands that might be enjoyable somewhere on a live bill featuring other high energy garage rock/punkers, but in terms of recorded works, there’s all too often something amiss. ‘TFBIWW’ is half decent, but it sounds like it’s been plonked into the middle of the wrong recording. On the whole, it might be worth garage fans taking a listen to this EP out of sheer curiosity…but curiosity is all it’ll be. File under: wobbly at best.