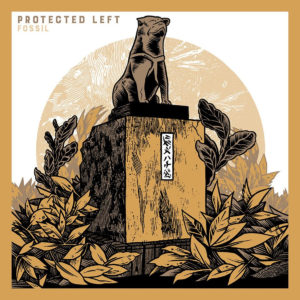 Following 2018’s ‘Posterity’s Sake’, Protected Left’s 2019 EP ‘Fossil’ combines fierce riffs with personal commentary to create a five tracker that should appeal to fans of Propagandi and of the noisiest end of Strike Anywhere catalogue. In terms of thrash oriented punk, it feels a little generic but there’s absolutely nothing wrong with that, especially when played as well as it is here.

Opener ‘Never Know’ shows off those influences incredibly brightly. Following a few incredibly slow and heavy chords, the band take their speed driven riffs and a sheer desire to pummel their sound into listener’s skulls. Across the following three minutes, they set creating a sound that’s classic melodic hardcore, where Mario Bourzac’s lead vocals remain tuneful (and audible) above the relentless riffing. Within two verses, there’s a lot here that fans of Strike Anywhere will love and while the track descends into a fairly repetitive lyric, the music remains first rate. Of particular note, drummer Trey Derbes attacks his kit with a real intent and a brief off-kilter moment en route exposes a fantastic, fat sound from bassist Bret Fontaine, more than demonstrating how this power trio are capable of absolutely nailing a melodic hardcore sound. ‘The Swell’ isn’t much of a shift from the previous number but is arguably a little more interesting, as it throws in odd time signature shifts along the way. This allows Trey to show off his abilities with unexpected stops, something that often seems to keep the rest of the band on their toes. For those who love their hardcore punk and skate-oriented sounds to include the odd hat tip to classic metal, a fiery lead guitar fills a few bars along the way. Despite their overall sound being a solid blend of hardcore and skate punk sounds, Protected Left show they are unafraid of even older influences, chucking in a brief twin lead guitar that’s far closer to the New Wave of British Heavy Metal than any of their hardcore heroes. Brilliant.

Following a most unexpected acoustic intro, ‘Old Life’ grabs onto a riff that’s straight from ‘Full Circle’ era Pennywise and in terms of knockabout anger, it delivers power and thrills at every turn. As you might expect, Trey spends a huge chunk of the number in the driving seat, but once again, the lead guitar playing is on point with another shamelessly old school solo. For those looking for punky enjoyment, the vocals are very much a highlight – of this track and the whole EP – as Mario’s accessible style is augmented by a strong backing vocal and a full compliment of whoas, something which, again, reinforces the love for Pennywise and their peers. At this point, if there’s any (minor) drawback it’s perhaps that this feels a little one paced, but there’s no doubt at all that, in hardcore and skate-punk terms, these guys are fantastic players.

Going for something even punkier, ‘Worst Part’ drops forty five seconds of hardcore, before Protected Left set about their chunkiest workout this time out, with ‘Reboot’ working Trey as if he has a third leg. With thrashy riffs worthy of Propagandhi circa 1999 and an upfront bass punching through the wall of sound, in punk terms, this is first rate. Extra kudos must be given to the band for attempting to contrast the angry, speed oriented arrangement with a far more melodic vocal than this style would normally feature, too. In terms of lasting hooks, things are equally as huge. While the repeated refrain of “here’s to the next starting over” possibly deserved a second chorus line, it manages to retain a strength by combining the sentiment with the biggest and most brazen whoahs that Protected Left can manage. This of course ensures the track is memorable long after that all important first listen.

Protected Left’s sound might not be a hundred percent original, but it’s hard to find fault with any of their musical skills. In terms of riffs, this EP hits the mark at pretty much every turn and on at least two numbers – but especially in the case of ‘Reboot’ – there’s are hooks massive enough to pull in most lovers of their chosen style. If you still love Strike Anywhere, Propagandhi, Only Crime and more recent bands like Goodbye Blue Monday, this comes highly recommended.