Following the same set up as the 2018 Howard Jones reissues, the albums – Kim Wilde (1981), ‘Select’ (1982) and ‘Catch As Catch Can’ – are to be made available as 2CD/DVD sets, with each one hosting a whole bunch of bonus tracks and rarities.

Kim’s debut still holds up as a great pop record with new wave overtones and it’s also of (somewhat bizarre) interest that the whole of symphonic prog band The Enid appear as her backing band.  ‘Select’ is a fine example of a slicker 80s pop and includes the now lesser heard single ‘View From The Bridge’, while the somewhat overlooked ‘Catch As Catch Can’ completes the trilogy of reissues with a further foray into pop, including the “forgotten 80s” candidate ‘Love Blonde’.

All three will also be available on strictly limited coloured vinyl editions, although these will feature the album tracks without any bonus materials. 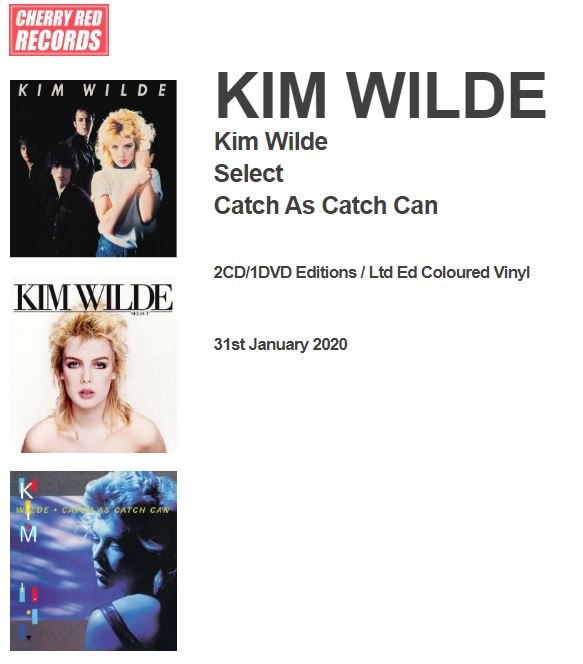 As anyone who’d purchased the Howard Jones reissues will tell you, Cherry Red know their way around a good 80s pop reissue, and since they follow a similar format, these first Kim Wilde reissues promise to be equally essential for the 80s pop fan

Pre-order links for all 2CD/DVD and vinyl editions can be found here.  The link also includes full details of each edition, including those all-important track listings.