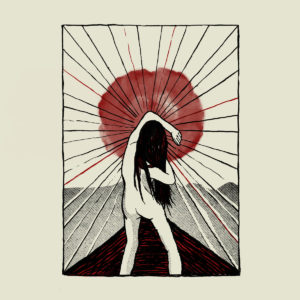 A five piece “dark rock” band from Bristol, Naut mix classic hard rock and gothic sounds to create music that sounds very retro, but still retains plenty of punch. Their debut EP ‘Raise The Lights’ gained positive press in 2018 and the follow up, ‘Semele’ finds the band continuing along their chosen musical path where swathes of 80s goth music collide with bits of 90s rock and a pinch of post-punk cool. It only features three songs, but each one is genuinely brilliant – and each one really builds upon the band’s love for all things moody.

The title track blends classic rock and goth styles, initially sounding like Killing Joke during the most melodic period during the mid 80s. With the arrival of the vocal, its almost impossible not to draw a parallel with Sisters of Mercy, especially in the way the voice croons and curls against a hard beat and shimmering guitars. It takes about eight bars to warm up, but from therein, listeners can be expected to be transported back to 1989 with a number that’s a flawless homage to Andrew Eldrich and friends. Musicially, it’s incredibly tight: the bass rumbles throughout and while the drums often have a very cold and mechanical quality, the playing is perfect for the job in hand. Ghost man Henrik Palm steps in for a guest solo, but offering a few sparsely played notes without any real flashiness, it’s obvious he doesn’t want to upstage his young hosts. In terms of an opening track, Naut really couldn’t sound any better.

Kicking off with lovely cold guitar riff, ‘Spirit Horses’ comes much closer to ‘Dreamtime’ era Cult – which, obviously, is never a bad thing. A fantastic bassline dances between the sharper, shimmering notes, quickly setting up a great melody. The arrival of the drums and vocal steer everything into a punchy goth-rock direction but, as before, Naut sound like masters of the genre. The DIY recording means the vocals occasionally sound a little muffled, but the semi-claustrophobic mood really suits the track. The verses are well arranged with the drums taking on a very slightly tribal feel, but it’s the second half of the number that impresses most, with an instrumental break giving a spotlight to a blanket of keys that are often buried elsewhere. As a gang vocal sets up an incredibly punchy section where goth meets post punk and the vocal shouts a surprisingly hooky refrain, Naut not only reach their peak, but also give the impression that this would be even more exciting in a live setting. Bringing the EP to a close, ‘Reprise’ is potentially the strongest of the three tracks, despite being half the length and ending somewhat abruptly. Working a simpler and repetitious riff, the track weaves an almost hypnotic goth sound during the verses where the band’s Sisters obsessions jostle with a mood that’s perhaps closer to the most maudlin and sinister parts of The Cure’s ‘Disintegration’. Bringing in the vocal, it’s another dead ringer for Eldritch, but the way that voice booms its dark mantra throughout serves the track excellently.

Sometimes hearing a band absolutely nail a classic sound is far preferable to something that’s flawed but original. This is definitely one of those times. Naut have the makings of being the best gothic rock band to emerge since the early nineties – and since so much of their material is derived from the late 80s/early 90s pioneers, ‘Semele’ will certainly pull the heartstrings of most lovers of a similar style. Highly recommended.