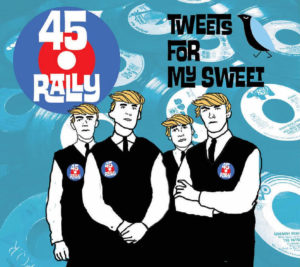 With a truckload of 60s riffs, an organ sound stolen from ? & The Mysterians and a frivolous sense of humour, 45 Rally deliver something special on their 2019 release ‘Tweets For My Sweet’. Not only do their sounds serve up a few lovingly created homages to a garage rock past, but they juxtapose their love of the retro with the more modern concept of social media used for malicious purposes.

As the title more than hints, ‘Tweets For My Sweet’ blends the familiar concept of 60s teenage love and other things with a bunch of Donald Trump’s most awful tweets, creating a potent mix of retro sounds and sensationalism. Not that 45 Rally use any of this to create any big(ly) political statements – more as a springboard for hooky choruses and fun. Obviously, though, when it’s made so obvious how and where the songs got their names, there’ll always be a certain feeling of commentary…even if, as in this case, its more of an impish subversiveness.

Sounding like an unholy montage of Chris Montez’s ‘Let’s Dance’ and an old tune spawned from the Cavern Club, ‘Bigly’ drops the listener straight into a 60s rock ‘n’ roll hurricane, where Sloppy Steve’s guitar lines carry a really authentic twang and Rocketman’s keys add a stabbing counterpoint to a busy melody throughout. Although primarily a novelty, the playing is spot on and the sound is about as close to a side of an old garage rock 45 as you’ll find. Taking a tougher stance, ‘Bad Hombre’ cranks the guitars ending up with a sound that’s a little closer to Paul Revere & The Raiders, but with added organ stabs for good measure. With the sound constantly bolstered by a brilliant, upfront bassline from Low Energy Jeb, this is a garage rocker that truly blisters – in terms of authenticity, these guys have it spot on.

Changing the mood, ‘Pocahontas’ slows things down to introduce a few culturally insensitive drums. A repetitive hook centring around the title probably wouldn’t have been as catchy in another context and while this isn’t as good as the previous tracks, there are still a few things of interest. The organ work, yet again, is absolutely brilliant – totally evocative of classic 60s garage 45s – and a slightly sneering vocal stokes up the jibing qualities of the unfortunate tweet that prompted the recording. It might lack the energies of the previous tracks, but even within the more mid-paced arrangement, 45 Rally show how they really understand and – most importantly – love the sounds they’re gently aping, Rutles style.

Getting maximum mileage from unprofessional tweeting, the double whammy of ‘Sad!’ and ‘Witchhunt’ lends this release its best tracks. The best tracks. Although it clings firmly to a punchy bass and Mysterians organ for the main focus, a ringing twelve string that cuts through the middle of ‘Sad!’ is an obvious homage to The Byrds, while its chorus hook could’ve stemmed from any number of UK beat groups, while the punchy rock ‘n’ roll of ‘Witchhunt’ has a chiming brilliance strong enough to stand alongside almost anything of a similar ilk. Not only does it have the catchiest tune, but also the sharpest chorus. Although the use of a refrain that teases the listener by pretending it could drop the c-bomb at the next couplet is a somewhat immature trick, it also keeps the track motoring with a real intent.

The EP’s most obvious novelty, ‘Shithole Country’ trades in the garage rock for a cheeky country two step. The change in style suits the funny lyrics about the perceived smell of poverty by a billionaire who’s bragging about not paying taxes, while a hefty lead guitar draws a much closer parallel with the band’s usual stick. Although not the best track, some listeners might hear echoes of Jello Biafra & Mojo Nixon, making it appealing in its own twisted way. ‘Alabama Hurricane’ is a brilliant, straight up beat group workout where a call and response vocal taps into a million late 50s and early 60s greats and while the unsophisticated vocals could seem empty in the hands of others, 45 Rally ensure the track has a little more depth thanks to a great arrangement. Its dancing bassline and swirling organ sounds come together in a very energetic way, showing that 45 Rally can be great musicians even when serving up novelties.

‘Whistle Blower’ isn’t so much a closing number as a brief coda; the kind of thing that other bands might include as a hidden bonus track. It’s a tune constructed around the title with very little further thought. Taking a slow, Duane Eddy-ish guitar riff and an accompanying whistle, 45 Rally bow out with an understated ditty that shows yet another side to their sound and although it might have been more effective to close with a real rouser of a tune, this wouldn’t have fit anywhere else on the EP. Since job number one is to make fun at the expense of the least qualified world leader ever, it would’ve been a shame to let such a quick and easy joke go to waste!

Whether ‘Tweets For My Sweet’ is a succession of cheap jibes or genuinely amusing will be down to the listener’s political persuasions but, if you aren’t amused by any of this, perhaps its time to take your regressive attitudes and your red hats and crawl back under your rock of ignorance. For so many, this release will take the pain of Trump’s tweets and make them entertaining in a whole different way. Although it is chiefly a cheap novelty, 45 Rally pitch their gag just right: long after the titles lose their relevance, ‘Bigly’, ‘Sad’ and ‘Witchhunt’ should continue to provide more than enough entertainment on their own terms.