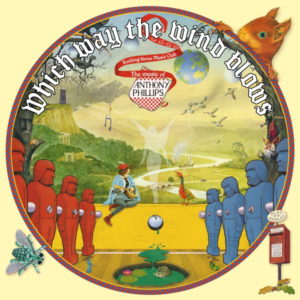 A reason enough to check out this tribute, the three selections from ‘The Geese & The Ghost’ are just fabulous. This collection’s title cut, in particular, is interesting as it has been given a great overhaul. The basic melodies are intact, but the assorted musicians re-imagine the once shimmering semi-acoustic tune in a more adult pop style. Ant’s original guitar part is replaced by a fine rock-pop arrangement, often centring around piano and a very warm bass. Vocalist Noel McCalla (most famous for his contributions to Mike Rutherford’s ‘Smallcreep’s Day’) tackles the performance with a soulfulness that’s quite different to the ethereal nature of the original Phil Collins vocal, but given the bigger sound, it works excellently. Purists may raise an eyebrow at first, but by taking the piece in a direction that perhaps feels a little closer to Big Big Train – themselves, huge fans of Ant’s work – this will definitely introduce a great song to new listeners. For anyone still sceptical, the instrumental coda should set them straight. With an increasing grandness, the repetitious melody is augmented by tubular bells, more great bass work and a fine solo courtesy of Steve Hackett, whose distinctive tones instantly make this feel like a lost Genesis gem…and strangely, like something you’ve known forever.

‘Collections’ is another of the more drastic re-imaginings, but even so, still comes out sounding very natural. As any lovers of the original will know, part of its magic comes from its fairly minimalist feel. RHMC have decided that less isn’t always more and for their version, they’ve taken the main melody and boosted it with drums, before taking Ant’s almost demo-like vision and bolstered the piano and synths accordingly. The result – although supposedly aiming for a Beatles vibe – almost sounds more like the lovely Tony Banks song ‘Many Too Many’ [from the Genesis LP ‘…And Then There Were Three’]. With a solemn and almost Autumnal quality reinforced by a crying slide guitar and a subtle choral arrangement, it’s deeper than first appears and while it could split opinion, it’s perhaps best to hear this as a new piece. That way, the arrangement truly shines. Considered “one of Ant’s prettiest melodies” by Rocking Horse Music Club, ‘Sleepfall: The Geese Fly West’ is treated very respectfully. Taking the lovely piano melody as a base, the band changes the lead instrumentation for each passage, starting with John Hackett’s flute, moving into a simple acoustic guitar, then electric. By the close of the multi-layered electric riff, there’s a feeling things just can’t get any bigger and so everything scales back to reveal a beautiful oboe solo from The Dream Academy’s Kate St. John. Carrying a wondrous 70s melody forward, this best demonstrates how RHMC’s core sound has a huge emotive pull. A definite highlight from a great disc, this should be heard by all lovers of soundtrack-like rock and pop music.

Two numbers from 1979’s ‘Sides’ benefit from a bigger sound, but even Rocking Horse Music Club’s best efforts can’t detach themselves from the now dated nature of the material. ‘Um & Argh’ still has a vaguely 70s pop-funk heart – the kind of thing you’ll love or hate – and doesn’t necessarily show the musicians at their best. That said, Patrik Gochez does his best with a Squeeze-ish vocal and the vibrato filled guitar solo is approached very sensitively, even if – much like Ant’s original version – it sounds as if it were written for an entirely different (part and) piece. ‘Nightmare’ works far better, with the rhythm section worked hard throughout on a jazz-rock arrangemenr. The original track is taken and expanded upon greatly and much bigger sound and warmer end mix already gives this the edge over the original. Some things are victims of the era in which they were created, not least of all Ant’s 1979-83 output, so any new warmth is welcome, but also the addition of wailing vocal for extra instrumentation and a toy piano lend this newer nightmare a more unsettling edge. For classic rock fans, though, a highlight will come from Supertramp’s John Helliwell guesting on sax, thus giving the coda of the track a completely different mood as everyone shifts into lounge rock.

Not limiting this tribute just to Anthony’s proggier output, there’s even a track reworked from 1983’s ‘Invisible Men’, a patchy but oddly enjoyable pop record. While either ‘Sally’ or ‘Golden Bodies’ with a Helliwell sax part might have been the most obvious choice, it’s ‘Something Blue’ that gets pride of place here. Taking something that was once a fairly trite and almost Chris De Burgh-ish ballad and reworking it as a smooth jazz number is a master stroke. The click track has given way to a real drum; the once thin sound is now a warm and lush arrangement with a cello and piano taking the weight. A muted trumpet lurks within the corner of this imaginary jazz club, giving the track so much more depth, but the true star is vocalist Evelyn Cormier whose Sade-esque tones really bring the performance to life. It couldn’t sound any further away from something within the Ant Phillips back-cat, but it’s great. If this doesn’t bring the song to a new audience, nothing will.

Taking things back into more of a pompy direction, the intro to ‘Pulling Faces’ has a real presence. Huge keyboards lead the charge into something very Genesis-like and even the tinkling guitars lurking beneath the surface often seem to carry the ghosts of Ant’s own work. Unfortunately, the annoying falsetto vocal on the chorus hasn’t been replaced with anything better, so it’s best to try and block that out and concentrate on the dancing basslines and some terrific lead guitar work (courtesy of The Room’s Steve Anderson) instead, while ‘Paperchase’ plays far more safely with a soaring vocal and a barrage of twelve stringed guitars shimmering throughout. Along the way, there are some lovely harmonies and a terrific mellotron, sure to please the older prog fan. According to Rocking Horse Music Club, “it sounds like something Genesis would’ve done in 1976” and in some ways that applies as this recording certainly has echoes of ‘Ripples’ and ‘Entangled’, but there’s no getting away from the fact that it’s got Ant’s spirit running through its veins. The intro, especially, is the most Ant Phillips sounding thing ever…you might even believe he’s on this recording.

Joining the various album cuts, there’s also a reworking of ‘Silver Song’, originally slated for a single release in 1973. Retaining all of its pastoral charm, but perhaps made slightly more minimalist at first, this contrasts the tribute’s more grandiose material. Bringing in the drums for the first chorus, RHMC show how they have a gift for great folk rock as well as various different strands of prog. Of particular note here are the rolling piano during the instrumental break – which almost falls into a Tony Banks ‘Firth of Fifth’ sound – and a terrific vocal. For those who prefer things a little proggier, Nick Magnus (one time of the Steve Hackett band and composer of the ‘Bloody New Year’ film score) steps in for a squirly and curly keyboard solo to finish, very much highlighting the song’s mid 70s origins. Hearing this again in any form is a reminder of how much it deserved a wider audience; thankfully, its appearance on the expanded edition of ‘The Geese & The Ghost’ allowed it to finally enjoyed.

While there will always be a few people who dislike any changes that have been made – and likely a few who’ll even refuse to listen – most of ‘Which Way The Wind Blows’ works very well indeed and is a lovely tribute to an all too often overlooked musician. Obviously, the presence of a few well known 70s rock musicians helps its cause, but even without them, the musicianship shown throughout is absolutely top notch. In many ways, you don’t have to be that familiar with the source material to enjoy this, either… This is a release both for the fans and the unenlightened and comes highly recommended.