It’s an uncharacteristically sunny Saturday afternoon in September. Most people are outside, filling their day with activities befitting of such good weather. For those who know where the day’s best value entertainment will be, though, the sun can (hopefully) shine another time. This day marks the fourth and final Star Shaped Festival event for 2019. The three previous events have seen Twitter abuzz with photos, tales of friends meeting and of a hefty dose of musical nostalgia. Hopes are running high for the final round in That London.

It’s just about 1.30pm. At this point inside the Kentish Town Forum, a solitary figure sits in the centre of a large stage with an acoustic guitar. He is Chris Helme, formerly of The Seahorses – a one-album 90s band featuring The Stone Roses’ John Squire. The Seahorses album has a hugely retro sound and a distinct northern charm. Like tonight’s headliners Cast and their ‘All Change’ debut, it should have been as big as Oasis. Bigger even. Unfortunately for Helme and Cast’s John Power, they were – and still are – both too nice to have stooped to the kind of gobby self-promotion often used by the Gallagher Brothers…and so, these arguably better albums aren’t talked about anywhere near as often as the likes of ‘Definitely Maybe’. At least not beyond the circles of ardent Britpop fans.

Since the venue is at least half full at this early stage, The Seahorses album still carries a lot of clout. Halfway through ‘Hello’, it’s clear that Helme’s voice has weathered the decades and watching him play without any kind of backdrop, distraction, or buffer of a bandmate or two, he remains a great performer. A few notes into The Seahorses’ classic ‘You Can Talk To Me’, there’s a sizeable roar…and the feeling that everyone is at the beginning of a fantastic day makes his performance even better. 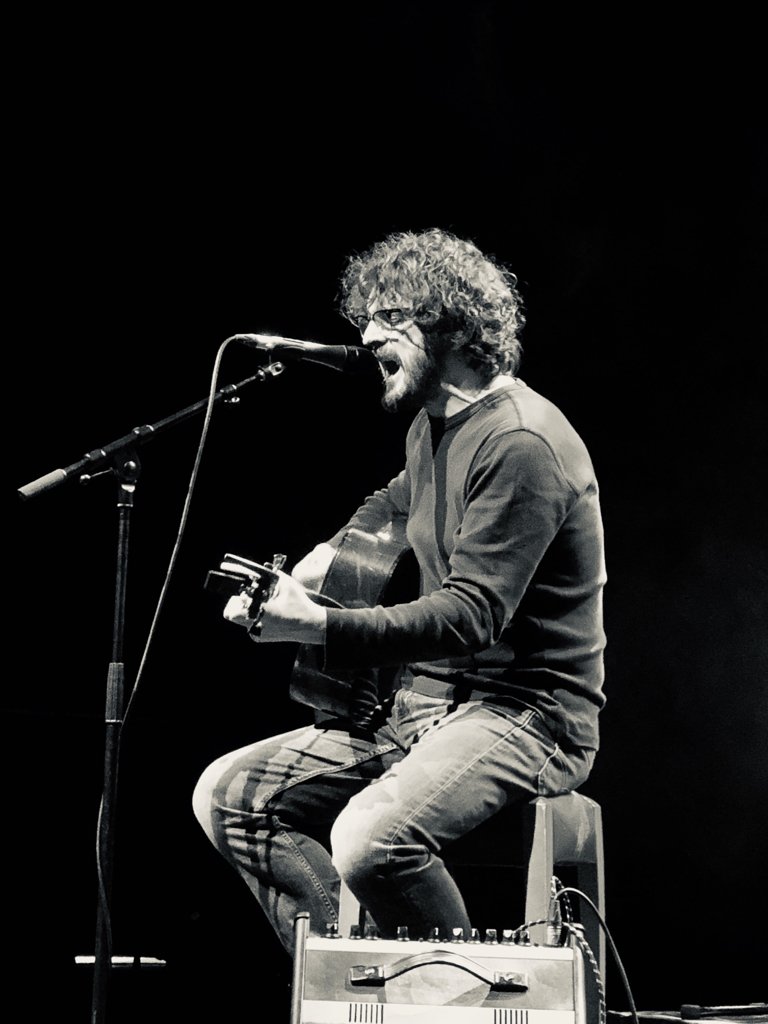 Helme apologises for talking too much between songs. He shouldn’t worry. Since he only has himself, his chatter makes the minimalist set all the more natural and informal, despite the venue’s size. A tale about his son meeting Rod Stewart provides a natural link into the Faces’ classic ‘Ooh La La’, played with love and gusto and joined by a reasonable amount of audience participation for such an early (and sober) hour; another story about meeting John Squire leads into an aside about nerves and having to play too many chords. “Before joining the band, I had to learn four chords and he asked me to learn this song…and it’s got five”, Helme half-jokes before hinting at nerves. Launching into ‘The Boy In The Picture’, his playing is great, his voice better. The song – occasionally carrying a hint of The Hollies’ ‘The Air That I Breathe’ – provides a natural set highlight.

Helme’s own ‘Pleased’ comes across as an enjoyable acoustic workout and even if it doesn’t quite grab the audience as strongly as The Seahorses material, at this point, there’s a feeling that half an hour with this guy won’t be enough. He’s great. Asking the audience to pick the next song between The Seahorses’ ‘Love Is The Law’ and ‘Blinded By The Sun’ gives everyone a tough choice. Each receives an equally large cheer. From near the back of the venue, a late-comer heckles for ‘You Can Talk To Me’ – hopefully he won’t be too disappointed to have missed it, As final adjudicator, Helme chooses ‘Love Is The Law’ but follows this with a cracking ‘Blinded By The Sun’, so nobody is disappointed. Allowing for more of Helme’s natural pace, these two performances are interspersed with a tale of living somewhere without curtains and how a move to Brighton didn’t offer “streets paved with gold, but with chips and vomit” in the hard life of a busker. This is such a well-rounded performance, allowing little glimpses into the times and places of when songs were penned.

Drawing the set to a close with an unexpected medley – part darkness, part fun – the strains of The Doors’ ‘Five To One’ fill the air, before the audience is invited to bellow their lungs out to ‘Eye of The Tiger’. An odd couple, but a strong gig memory is made, before a cover of an old Nina Simone number shows even more breadth to Helme’s collected influences. See, Noel, it’s not just about the (overrated) John Lennon.

Being the opening act on any bill is a tough job. Sometimes it’s pretty thankless. At this point during the London Star Shaped Festival in 2018, My Drug Hell were working hard to entertain two dozen people…at most. The fact that Chris has drawn a massive crowd at a point where people could easily be in the pub next door or in the nearby branch of Nando’s says everything. He’s got a strong foothold at the bottom of this day’s mountain of Britpop and he’s clearly well loved.

And judging by this afternoon’s solo performance, rightly so.