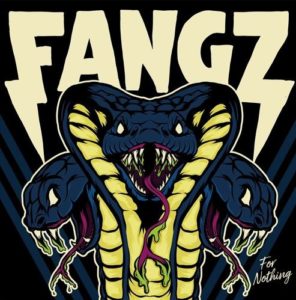 Although sometimes closer to trashy hard rock than straight punk or pop punk, this debut EP from Sydney’s self-proclaimed “party punks” is the kind of recording that grabs the attention straight away, regardless of genre preference. With a primary goal (in the band’s own words) of “getting people to drink beer and do backflips in mosh pits”, there’s always got an interest in stoking up good times, so you might expect something tossed off and frivolous…but the reality is far more complex. Digging deeper into the songs themselves, ‘For Nothing’ is the kind of debut that shows off a band that understands the benefits of a strong arrangement. Nothing here feels hacked out or too simple and yet the songs still value the kind of directness that’s capable of pulling in the listener from the very first spin.

At the band’s punkiest, the verses of ‘Voices’ comes across lik an old tune by The Bronx meeting with a less hardcore Every Time I Die. When approaching their music at full pace, Fangz have a real energy, something that’s reinforced by an enthusiastic vocal. There’s far more at stake than punk or melodic hardcore here, though. Fangz show off a frenetic style that takes in some great hard rock during a slower chorus, allowing guitarist Sam to reinforce an already huge sound with a fuzzy blues tone that injects a lot more more melody. Then, with bassist Jameel eventually stepping to the fore with a hefty four stringed sound set against a tambourine, there’s an unexpected twist when something that sounds like it’s taken inspiration from fellow Aussies Jet emerges, before dropping back into the swaggering hard rock. It should be a mess, but it all works, suggesting there’s a lot to be said for sheer balls. The ever changing mood of the piece often puts drummer Woodie in the driving seat. His playing carries a huge amount of weight as he constantly pushes the band forward during the punk oriented parts and when shifting between thrashy drums on the verses into a hefty almost stoner rock swagger on the chorus, it shows a man capable of turning things around on a hairpin. Whatever the style of rock, the whole of Fangz have a real drive. It’s hard to believe they’ve squeezed so much out of a number that barely scrapes the three minute mark.

‘Wastr’ retains a lot of that speed and energy, but injects more of a pop-punk oriented vocal in places. Josh’s higher registers occasionally taps into sounds that’ll resonate with lovers of the more emo-ish end of twenty first century punk, while the music has plenty of other interest throughout. The band’s choice of riffs all come with a sense of presence, but the brief bridges between verse and chorus are of the most interest, since Woodie unleashes some great tom work, reinforcing any prior feelings that he’s a monster behind the kit. For those looking beyond the grittier edges, a slow interlude towards the track’s end introduces some fine playing from all concerned, but especially from Sam on guitar. The descent into moody hard rock with a stoner bias could be the work of an entirely different band, but for those keen to lend an open ear, this suggests that no matter what rock styles they choose, Fangz would sound at ease…and sound like true professionals. ‘One For You One For Me’ works a great melodic hardcore riff, powered by some fantastic drum work, while a dirty guitar riff adds extra roughness with a very overdriven sound. After a couple of minutes playing at speed, there’s a brief interlude that sounds like the band might drop into something of more of a stoner-ish persuasion, but this time it’s a red herring and the chorus makes a quick reappearance with the band in full flight. It isn’t as interesting as the EP’s other tracks, but between a really good production job that really brings out the crunch of the material and a lot of exuberance, it works well enough.

The last track changes the mood yet again. Starting out with a mid-paced stomp that sort of feels like a basic homage to Royal Blood, ‘Crossroads’ then branches out into something that fuses hard rock and punk brilliantly. If anything sticks here, though, it’s not always the song but the musicianship. If it were unclear before, this number really hits home how well these four guys play together. As with ‘Voices’, the drums take centre stage despite being approached in a completely different way, and it’s their ability to compliment with a trashy guitar riff on the chorus really makes the track. At its peak, you might hear traces of Sum 41’s more rock oriented material, but the way Fangz mix a slight pop-punk influence with other hard rock elements very much makes this hybrid sound their own. It’s a track loaded with great riffs, but a great – and slightly old school – guitar solo lends an extra dimension.

If you’re approaching this expecting just punk (from any style or subgenre) you might find yourselves a little confused – especially if you’re closed minded. If you’re approaching this from a trashy hard rock perspective, some of it will be a little too punky or skate oriented. ‘For Nothing’ resides in an inventive no-mans-land between the two camps and while that might not necessarily suit everyone, these guys should be commended for mixing things up. Regardless of genre, for lovers of a hard driving riff, ‘For Nothing’ should be a welcome release, especially since Fangz are more than capable of producing some brilliant results…