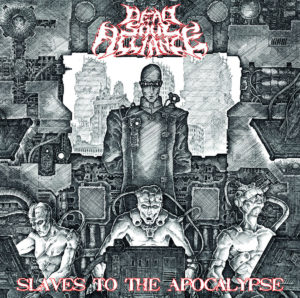 With ‘Slaves To The Apocalypse’, Dead Soul Alliance pledge a firm allegiance with very old school death metal. Since its six songs have little interest in blending pure pneumatics and low end growls with anything too far away from a more palatable Slayer-ish riff or two, even in metal terms, you could even say they’ve become slaves to their own chosen genre. For those who enjoy a bit of straight death, though, this isn’t necessarily a bad thing since these six songs are so tautly arranged, it’s hard to find any real fault with DSA’s talents for the extreme.

Something that is particularly striking, however, is that Dead Soul Alliance are just a two piece band. This duo are more than capable of recreating the full scale fury of a traditional five man death metal force. Following an intro of wind and screams, ‘Act of The Sycophant’ wastes no time in asserting its heaviness. A slow, crushing riff introduces the band and with just enough time allowed to get the measure of such heaviness, drummer Shawn Carrier dictates the speed with a barrage of drums worthy of Paul Bostaph. Above a wall of pneumatic rhythms, a mix of shrill and heavy guitar riffs throw out an equally abrasive sound while frontman Wolven Deadsoul delivers an apocalyptic sermon that really compliments the musical backdrop. Any lyrical messages are unclear; what is clear is that DSA are spot on when it comes to recreating a trad death sound – and by condensing this opening assault into just three and a half minutes, it’s even more effective.

…And with those musical traits established, the rest of the release continues along a very similar path. ‘Forged In Forfeit’s opening section comprising of jagged riffs and classic thrash/death groove is a particular highlight, but even after the duo have adopted their more typical death infused stance, it’s hard to argue that their playing isn’t absolutely faultless for the style. Between that and the religion-baiting samples used to open ‘Worlds Within Worlds’, DSA aren’t at all shy in showing a love for the classic bands of yesteryear… Presenting terrific riffs inspired by the young Ralph Santolla, ‘Worlds Within Worlds’ deserves to be a genre classic. Even by its mid point, all of their tried and tested death metal onslaught still shows little sign of wearing thin, very much proving that there’s not always much point in tinkering with an established formula. When something works this well, it’s usually for a good reason.

The title track essentially brings more of the same but, in terms of pure enjoyment, a slower intro that takes obvious cues from Slayer’s slower material combined with some almost lupine-esque guitar howls creates a highlight, as does Deadsoul’s committed vocal performance, reaching even deeper within himself than before. The shorter ‘Forever Misnthropia’ edges a little closer to the formulaic, but between a much deeper, grinding bass and a couple of great guitar sounds cutting through, there’s still a lot to enjoy. Wolven then shows he has enough strength to carry similarly intensive growls through to the finale ‘Forever Against’, a number where Dead Soul Alliance inject some great spooky melodies into their more typical aggression. During these final four minutes, the combination of dirty guitar lines, heavy downtune and ominously spooky lead work lift a barrage of intensive drums and vocals. While a few of the guitar leads are more accessible than before, there’s no real shift in the overall heaviness, especially as the number moves along. “Trust all…except God”, Wolven grumbles, while Shawn sets about keeping a ferocious rhythm…and if this feels like a throwback to Glenn Benton’s impassioned rants, then so be it – DSA aren’t shy in playing the death card for all it’s worth, complete with the by now clichéd tropes that come with it. In terms of playing – and the shifts between pneumatic speeds and a semi-doom laden slowness – it’s actually one of the release’s best tracks.

With no real deviations from the heavy or pneumatic (and usually both at once), ‘Slaves To The Apocalypse’ is the kind of release that’ll feel nostalgic for anyone that loved Deicide, Carcass and other similar bands in the early 90s, while still managing to sound both oppressive and intense at the time of its recording. Needless to say, it’s all squarely aimed at genre fans only, but you’d be hard pressed to find straight death metal played much better than this.