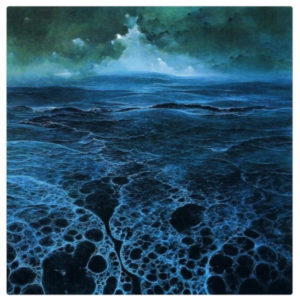 2019’s ‘Ocean Is More Ancient Than The Mountains’ (released via the appropriately named Sludgelord Records) continues down a similarly darkened and vocal free path, always allowing the slowest of riffs to carry the message. The only big difference is that, this time, Plague split the music into two numbers for an easier digestibility – although if you’ve experienced the band previously (and it’s always an experience), you’ll be more than aware that “easier” is a relative concept. Even in metal terms, there’s very little that’s easy about their music.

The first of this EP’s two epics, the nine minute ‘Crawling Chaos’ quickly settles upon a classic sounding stoner/sludge riff and then steadfastly refuses to budge pretty much for the duration. Despite the Conan/Tuskar-esque heaviness, there are glimmers of a strong musical hook throughout, although this only really embeds itself through wanton repetition. If anything makes this lengthy instrumental truly work, it’s a fabulous tone; the guitars always come through with an amplifier-torturing volume full of distorted bottom end. The bassier elements are so angry that it’s actually hard to believe that the recording has been created from just guitar and drums. Looking further ahead at those drums, they’re equally intense and a live in the studio sound really brings out the snare throughout. In some ways, the track would benefit more from a couple of bigger changes in mood, but if you’re coming to Plague just for sheer heaviness, this definitely won’t disappoint.

The stronger of the pair, ‘Madness At Sea’ brings that much needed sense of variation without losing any of the sludge. It opens with a hugely distorted riff that sounds like a cross between the heaviest blues, a musical sting for something tragic and the sound of a man abusing volume and feedback. The purity of the recording is such that the ferocity really comes through…and even though this (almost) melody-free passage only acts as a brief intro, it’s incredibly draining. After a couple of minutes, though, the duo find their doomy mojo and the heavy tune that slowly emerges is actually rather good. Taking the kind of riff that Conan made a sludge staple, the guitars grind and crank in a repetitious manner. The lack of variation in the riff is never an issue, since the sheer presence is enough to win over most fans of doom-oriented sounds and the tribal influenced drums are terrific. It’s actually those heavy, pounding rhythms that lend the number its relative melody throughout; the playing is very assured and by the time the track crawls to the six minute mark and Plague find themselves neck deep in an intensive hybrid of sludge metal with gothic overtones, their abilities to make a basic two-person line up sound as if three full doom bands are playing simultaneously really comes into its own. Finding time for a couple of passages of pure sludge before returning to the distorted blues riff that opened the track, ‘Madness At Sea’ covers at least four different musical movements – each one just as heavy (or heavier) than the preceding one, but with each one surely sounding like pure sludge to the unenlightened. In terms of raw, instrumental heaviosity, things rarely come much better.

Unless you’re firmly in the zone for mega-sludge and doom, this release can be hard going in more than a places, but if you’ve any prior knowledge of underground sludge or a love for the style, its all round enormity will surely win you over…and fairly quickly too. For sludge lovers, it’s one of those independent releases that probably shouldn’t be missed. For everyone else, it’ll outstay its welcome in about three minutes…but that’s surely Plague of Carcosa’s chief intent.