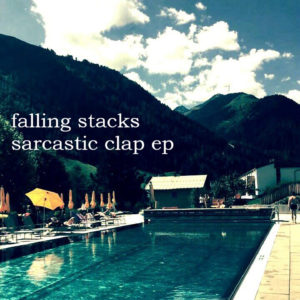 Falling Stacks’ 2015 EP ‘No Wives’ has been referred to as “critically lauded, but non-selling”, an approach that very much shows a humour when trying to promote music that definitely isn’t going to appeal to anyone within the mainstream. Their 2019 EP ‘Sarcastic Clap’ is by turns angular and oddly funky; noisy yet arty…but always disarming.

The lead track ‘Standing Leg’ provides a relatively melodic insight into the band’s preferred style of angular weirdness. It’s especially good for first time listeners since it quickly locks into a groove that sounds like something from Talking Heads’ ‘More Songs About Buildings & Food’ replayed by Minutemen during the ‘Double Nickels’ sessions. After a minute or so, it’s obvious that repetition is key to pulling in the audience and while there is a vocal, it isn’t remotely interested in breaking the momentum. Eventually, bursts of distortion punch through and the tune twists, but at the point you feel it might break into something really angry, it just falls back into its original groove, by which time there’s as much influence from early Gang of Four and ‘Nocturnal Koreans’ era Wire as anything. However, the band have been able to take these seminal influences and recycle them into something that at least very much feels their own. By the closing moments, there’s a strong feeling that this mightn’t be entirely representative of anything that follows; that Falling Stacks could take a detour at any moment and lurch into some really spooky vibes. …And indeed, that’s exactly what happens on the second track, as the trio lets go of those more rigid constraints and instead works a slightly discordant guitar line against a heavy, thudding bass and a few carnival influenced keys. Upon hitting its stride, a distorted wall of sound that appears to draw its chief influence from early Sonic Youth. This obviously gives Falling Stacks an extra power, but any amount of wilful, arty noise making plays second fiddle to the vocal. Throughout the track, a yelping and uneasy voice battles the noise-rock drones and guitar stabs, with a performance that’s decidedly Jello Biafra-esque.

Having challenged their audience enough, ‘Funner’ closes the EP with something far more straight forward. The slightly atonal guitar lines that chop through the verse are a dead ringer for the more aggressive parts of the Placebo debut, something that makes for fabulous listening when joined by some Kim Gordon-esque basslines. With other parts of an inventive three minutes channelling almost inaudible shouts, heavy toms and howls of distortion, there would be more than enough to sustain this track…but, obviously, for Falling Stacks, that’s not enough. These guys care not for the “less is more” theory and so they throw the track off centre by adding stops, distorted power chords and factoring a few other quirks in…and usually in the places you’d least expect them. With some heavy influences from the 90s coming alongside more finely crafted noise-rock and a wonderful heavy bassline at the close – bringing a sound worthy of the young JJ Burnel – this really has it all. It’s definitely the most appealing of these three tracks and very much ends the EP on a high.

There’s a lot packed into this trio of tunes. With ‘Sarcastic Clap’, Falling Stacks take on fellow Leeds noise-makers SuperLuxury for the most angular stroppiness packed into ten minutes. If you’re not in the mood, it might all feel like it goes on a hell of a lot longer, but if you value riffs and ideas over choruses, or have more than a passing fancy for NoMeansNo, Tumor Circus or the mighty Cattle, you should waste no time in checking this out.