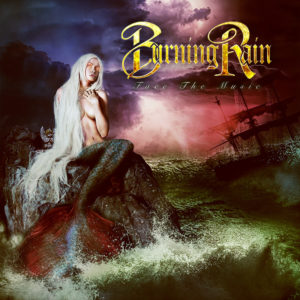 2019’s ‘Face The Music’ breaks a six year hiatus for Burning Rain, but fans will surely celebrate their return since the album is almost everything you could hope for. The lead single ‘Midnight Train’ taps into the band’s signature groove but heavies up the sound by about three hundred percent. The music is fabulous, with far more in common with Tremonti than the Burning Rain of previous years, but a melodic slant on the vocal and blues-inflected leads scattered throughout reinforce their classic rock origins. Granted, the lyrics are a mite cheesy, but all things considered, it’s a four minute tour-de-force of melodic metal that promises well for the rest of the album.

…And aside from one glaringly obvious – and mildly painful – exception, the rest of the record is full of strong material. Between the hard rock stomp of ‘Revolution’ and the tough swagger title track alone, long-time fans will find a couple of numbers that add some massive weight to the Burning Rain legacy and ensure this return is very welcome. The title cut brings everything back to a sound that’s got far more in common with some of Burning Rain’s earlier works with some dirty hard rock that carries bluesy vibe throughout. Chorus wise, it’s one of those tracks that’s utterly unafraid to go for a hook that’s catchy, with strong influences from the harder end of Lynch Mob’s older material.. For fans of Aldrich’s guitar work, he’s on hand with an absolutely blistering solo, so in terms of following up ‘Epic Obsession’, this feels incredibly natural. ‘Revolution’ revisits the kind of Zeppelin-esque stompiness beloved by so many bands clinging to the coat-tails of a classic rock sound in the wind of changing fashion. Years ago, it would’ve been a brilliant Lynch Mob number…and indeed, transplanted into the spring of 2019, it’s got the kind of balls that reminds us all why Burning Rain are beloved by fans of the heavier end of the classic rock spectrum. Aldrich’s playing is tight and Keith St. John’s voice is naturally gritty; between them, they’re set to steer this album in a very welcome direction.

‘Hit & Run’ is an odd beast. It starts as a hard blues, then drops into a semi-grungy groove that sounds like Burning Rain fused with ‘Dogman’ era King’s X, before the chorus switches everything into to a hard rock cheese-fest. During the track’s lighter moments, there’s plenty to signify that Nickelback might have been a subconscious influence. This isn’t just in the vaguely sexual undertone (let’s face it, Chad knows nothing of either “vague” or “undertone”), but rather more in the “party vibes” that parts of the melody conjure very swiftly. By the time the Burning Rain/Nickelback mash-up enters it’s last chorus to finish, it’s entirely possible to forget how and where the track actually began. It should be a mess, but it’s to the musicians’ credit that this Frankenstein’s Monster stitched together from old dairy products actually works. It’s never going to be your favourite Burning Rain track, but it’s certainly fun.

Elsewhere, ‘Nasty Hustle’ takes a fairly trashy hard rock riff and applies that to an even trashier lyric. With a hefty slide guitar and the kind of knockabout vibe that would better befit Motley Crue, it’s hardly Burning Rain at their best and it only sustains one or two listens before wearing a bit thin, but ‘If It’s Love’ more than makes up for that with with a fantastic heavy blues groove where Aldrich gets to demonstrate a cleaner and much subtler guitar tone that has much more in common with his Whitesnake works, which joined by an effortless vocal results in an instant highlight. Also showing a gift for mixing the heavy with the melodic, ‘Hideaway’ is a great tune with a massive crunch throughout. There are hints of a mid 70s funk groove hiding under the intensive hard rock; this shows Burning Rain in a very natural state as they make the creation of tough riffs and slightly gruff vocals seem so easy. There’s something about the intro, too, that’s an instant attention grabber. It’s probably the feeling that it could drop into Motley Crue’s ‘Dr. Feelgood’ at any second, but that’s no bad thing…

At the outset, ‘Beautiful Road’ sounds as if it’ll be one of the weaker tracks, especially with an intro that tries far too hard to recreate the drama of Whitesnake’s ‘Still of The Night’ but four times heavier. St. John is in good enough voice to fill the spaces, but it’s the kind of thing that’s been done to death…and Burning Rain are capable of better. However, once the number settles in and the band go about recreating some blues-tinged hard rock, it’s a track with a couple of really appealing features. Firstly, Blas Elias’s drum sound is really solid – he gives the whole of the album a genuine punch, but here, he’s really putting his weight behind the kit – but, perhaps most importantly, Doug embraces the more 80s side of his playing and that results in an absolutely fantastic solo where he shows both aggression and taste, dropping in some speedy lead work.

In a lot of places, ‘Face The Music’ is heavier than previous Burning Rain records, but it’s none the worse for the extra volume and oomph that’s so often been applied. Just don’t expect anything ground breaking and you’ll discover a hard rock album that just wants to entertain…and approached in the right frame of mind, as always, entertaining is a job that Burning Rain do incredibly well. Doug Aldrich’s lead playing is practically faultless throughout, and over half the material represents hooky hard rock that fans will take to heart in an instant. ‘Nasty Hustle’ is a blip that’s best avoided, but in the main, ‘Face The Music’ is a very welcome return.