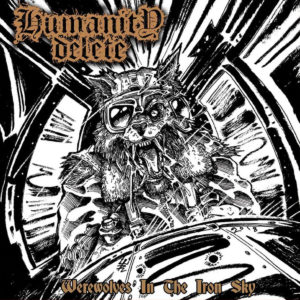 Humanity Delete’s second album, the retail-unfriendly titled ‘Fuck Forever Off’, was a great piece of death metal. For those able to make it past the terrible name and even worse sleeve art, the album showed how it was possible to take classic death metal tropes, shake them up a little and come up with something that felt traditional and yet still new and relevant. Often sounding like a death metal infused Lamb of God, these Swedes definitely showed an ability with a riff.

Almost three years on, ‘Werewolves In The Iron Sky’ is an absolutely magnificent follow-up. The title track shows a band who’ve really grown in the interim as intensive groove metal riffs provide both extreme heaviness and melody during the intro. Following a few bars of something that sounds like a soundclash between a stoner metal band and Lamb of God, things then speed up and inject passages of melodic death, which quickly asserts this as Humanity Delete’s best track to date. With three distinct styles and a guttural vocal fighting for dominance it could get messy, but finally settling into something that’s not too far away from ‘As The Palaces Burn’ era Lamb, Humanity Delete show how they can take on the best in the heavy groove stakes. ‘Prototype Metal Claw’ takes a sidestep into riffs that occasionally bear a closer resemblance to early Machine Head interspersed with bursts of melodic death. Sounding like the pinnacle of everything the previous album set out to achieve, ot doesn’t have to try too hard to impress, but in terms of extreme metal listens it’s incredible. With a melodic counterpoint of twin lead guitars suggesting far more than metal noise and a shift into purer groove metal for an all too brief solo, it’s a must hear for anyone that loves anything at the more accessible end of the extreme metal scale.

Going for a deeper sound, ‘I Grip Your Heart’ opts for something closer to classic death metal in the main, with most of the riffs and vocals hinting at mid-period Carcass. It’s pretty much going to drive away anyone not attuned to death/progressive death but, again, throughout a very powerful four minutes the band show a natural musical flair. The drums are especially good with the pneumatics interspersed with deep tribal grooves and a fantastic production really helps to bring the material to life. A brief shift into more Lamb of God-isms for the mid section brings a very obvious extreme metal groove, while a piercing lead guitar cuts through in fine style. A double whammy of an idea ‘Werewolf Reich’ and the subsequent ‘Werewolf Reich II’ shows off almost the full range of Humanity Delete’s metallic interests. With the first part throwing itself into some intensive melodic death grinding, lightened a touch by a couple more Lamb of God inspired flourishes, there’s a genuine familiarity at play, but an insistence on staying within a comfort zone doesn’t actually weaken the impact. The growling vocal is one of the album’s most assured, but is still no match for the music itself. Featuring flawless drumming throughout alongside a general heaviness and bottom end that just slays, there’s so much to love. The droning aspects of the second chapter suggest something moodier, filling four minutes with a gothy and almost funereal charm. Coming closer to My Dying Bride and Paradise Lost, it doesn’t always have much in common with the rest of the album, but it definitely hints at a band with a willingness to grow and experiment. The landscape of metal is pretty vast, after all…

‘Fur (Furimmer)’ somehow manages to take everything up a further notch into a grinding frenzy that almost dispenses with any kind of tune. The speed and tightness with which the rhythm section are able to work is just astounding, but smart bastards that they are, Humanity Delete know that there needs to be more on offer if they want to stand out from a hundred other death bands. And so, for the second half of the track they settle into some massive doom/stoner/thrash riffs that are one part Sabbath, one part Sleep and at least five parts ‘Beneath The Remains’ era Sepultura. In short, old school heaviness rarely sounded so pure – and with that, ‘Fur’ quickly turns from a hard listen into an album highlight. Even stronger – and certainly far more consistent – ‘Conjure The Moon’ presents some massively accessible metal. Driven by a fantastic, fantastic riff that sounds as if the ghost of Dimebag Darrell can be found jamming with Mark Morton on a groove-laden verse, it starts well before a melodic hardcore chorus sounds even better. Bringing out yet one more aspect to the band’s heavy array of sounds, the vocals find a space somewhere between a throaty grunt and angry growl, making the lyrics more audible than ever before but without sacrificing too much of the ferocity, but it’s the music that’s the biggest draw…and frankly – despite a selection of obvious influences playing out – Humanity Delete have rarely sounded better.

The vocals might still be a bit too challenging for some listeners, but if you can get past those, the music throughout this album represents some absolutely terrific, top drawer metal. An abiding love for clssic death metal and the more groove-laden sounds of Lamb of God still gives Humanity Delete most of their power, but at the same time, adding more obvious melodies on numbers like ‘Conjure The Moon’ and ‘Werewolf Reich II’ makes their huge leap in progress since the last album more than obvious.

In short, 2016’s ‘Fuck Forever Off’ was an interesting extreme metal curiosity, but 2019’s ‘Werewolves In The Iron Sky’ is a fully formed riff-fest that needs a much bigger and more appreciative audience. Do you miss In Flames having a proper growl? Do you think Lamb of God’s ‘VII: Sturm & Drang’ was just too commercial? Do you fancy the idea of Carcass bringing back a bit more of a death metal tradition? This is definitely for you.