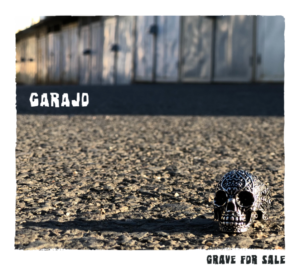 Romania mightn’t be the first place you’d go looking for surf rock sounds, but Grave For Sale are a band deeply immersed in the retro style. Their musical universe draws influence from greats like The Ventures, but also applies sounds that could be found at the heart of horror rock, often resulting in tunes that sound like a blend of fine garage based melodies and a deep cut from a Tarantino soundtrack.

Their second EP, 2019’s ‘Garajo’ is seriously great. It has an old spirit, but a really beefy sound and its five tracks cover a lot of ground, yet at the same time, sound like tunes that belong together. In short, it’s a superb twenty minute showcase for a band whom deserve a larger fan-base.

The EP wastes no time in displaying its retro heart when ‘When The Surf Goes Down’ starts off with a combination of deep toms and…an electric piano. Lounge-y easy listening keyboards aren’t exactly essential to surf rock, but by thinking outside of the box, Grave For Sale instantly present a very distinctive and very kitschy sound – and it really works in their favour. The tune is very soundtrack influenced; the keys create a terrific haziness that reflects the mood of a late afternoon sun, while the sounds of waves and a muted trumpet accentuate an easy cool. It’s almost like a deep cut from Royksopp or Zero 7, but with extra beach vibes thrown in. It’s an odd choice for an opening track – everything here suggests winding down – but, clearly, the band are proud of the result and it certainly grabs the attention in a most unexpected way.

It also sounds like nothing else on the EP, but the other four tracks each have their own appeal. For lovers of no-nonsense garage rock, ‘Garage On Fire’ does exactly what it says on the tin, delivering a massive riff from overdriven guitars. A non-English vocal adds an off-kilter vibe – as do more keyboard flourishes – suggesting a track that takes some adjustment. However, by the time the garage rock gives way to straight surf rock, much like Dick Dale but with deliberately less finesse, this sounds great. As before, the band shows a gift for the unexpected when they throw an aggressive trumpet into the mix. While this is probably the EP’s weakest number, a real attitude and some decent playing makes it worth hearing.

Having now had time to warm up, ‘Bruno’s Boogie’ injects a little rockabilly style and the heavy reliance on echoes and reverb sounds better than ever. The basic rhythm could perhaps have benefit from a bit more pace, but the individual elements are more than solid; the heavy toms lend a deep sense of the spooky, while the guitars are a 50s throwback with a huge attitude. As with previous tracks, the electric piano adds a whole new dimension and by the time the song reaches it’s mid-point, the use of that – plus various overlaid synths – are the key to this feeling much broader than being just another piece of retro rock. Moving from the quirky to the truly bizarre, ‘LED Jesus’ recounts an experience of wiring a Jesus doll to an electricity supply while exploring some much purer surf sounds. As with the previous tracks, the talent within the band is obvious, with drummer Tibi shifting easily between the three different musical moods easily, adding a few great fills along the way and guitarist Adi turning in his best performance.

Bowing out with their title song, ‘Grave For Sale’ reinforces the horror elements and heavy garage rock moods on a number that sounds like the young Captain Beefheart meeting with The Sonics and then putting their own stamp on something like ‘The Monster Mash’. The vocals bark and cackle with a demented glee, always challenging the riffs for sheer force, while the guitars – now turned up to the max and throwing out Munsters inflected riffs with ease – lend the number some vital garage rock noise. The use of keyboards tinkling away in the left speaker channel are perhaps a little redundant, but are an omnipresent reminder that this is the work of the same three guys who gave you ‘When The Surf Goes Down’ just twenty minutes earlier. It’s great to hear them branching out…and a fantastic end to a really fun EP.

For fans of slightly out there garage vibes, this EP will certainly be interesting enough, but for those looking for a hefty dose of Dick Dale and The Ventures brought into the twenty first century with a boundless love, ‘Garajo’ could just be one of the most welcome surprises of 2019.