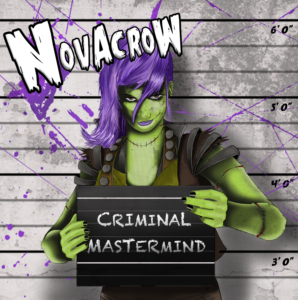 Following a novelty spoken intro, ‘Fever Swamp’ features a hefty riff that comes with a huge sense of swagger. It’s simultaneously less gothy and less funk oriented as most of Novacrow’s previous recordings, but the band are still recognisable by vocal since Kitty’s voice retains its effortless crying edge from before. Battling against a deep and almost grungy riff, she belts each line, curling her tones around a lyric that weaves in and out of the deeper sounds, making more of a rhythmic impact. Chorus wise, things take a turn for something a bit simpler and much sludgier, so the riff overshadows any kind of lyrical hook. With no guitar solo or any other kind of flashiness – save for an all too brief bass rattle and drum fill – it’s down to that main riff to make an impression, which it ultimately does, so it’s a shame the actual song writing falls a little short.

Much better, ‘Lab Rat’ opens with a hefty riff that moves with a manner that almost echoes early Disturbed crossed with something a bit more stoner-ish, before branching out to allow a bigger, more groove oriented sound to take over. A pre-chorus riff is boosted by some superb drumming, before the chorus itself works via sheer simplicity. A near call and response vocal finds Kitty battling it out with guitarist Jonyx, while the riffs continue in an impressive manner, pulling elements of alternative nineties sounds into the present. As with the prior EP, Kitty’s voice is terrific, crying out with a pleasing and clear tone in contrast the grubby riffs. In terms of style, Novacrow once again show an ability to blend a heaviness with melody…and with ease. Presenting a bluesy riff and crashing drums, the title track occasionally sounds more like a heavy take on Black Stone Cherry than any of Novacrow’s oft-favoured goth bands, but it’s a style which very much suits them. Jonyx spends the whole track chugging like a bastard on a riff that never lets up, but since the main refrain includes the instruction to “shut the fuck up” – something that’ll be easily workable for participation at gigs – this was never meant to be subtle. In terms of heaviness, it’s certainly one of the band’s best tracks and if you came looking for riffs, you certainly won’t feel short changed.

An almost tribal approach during the intro to ‘Laughing Gas’ provides another strong opening, showing Valerio Pompili to be more than capable behind his kit. Fortunately, the strong sense of power carries through as the band then indulge in a dark and gothic riff that almost feels like a throwback to their debut. Tackling something that isn’t a million miles away from classic Black Moth, Kitty offers a superb vocal performance, tapping into a lower register that adds an atmospheric croon to her already strong delivery. In terms of gothic metal, this doesn’t try to be clever or add a new slant to an established style, but between a fine lead vocal, backing vocal grunts on loan from Type O Negative and a great riff, this is easily the EP’s standout track. By the time the band have delivered the chorus for a second time and a defiant cackle drops into a fairly traditional sounding guitar solo, you’ll get the feeling the band had fun at the recording sessions.

With circus like quirks, ‘Are You Happy’ closes the EP with ringing bells, keyboards and a twisted vocal full of carny influenced goodness. A multi-layered vocal manages to both fill out the sound and make things seem more sinister, before sparsely used percussion suggests things are about to intensify. …And indeed, the ensuing riffs bring a deep and gothy sludginess. With hints of Marilyn Manson, Kidneythieves and Pist.On, potential throwbacks to 90s goth metal rarely sounded quite so good – and with a melody that’s pretty infectious right from first listen, it’s a fine way to bow out.

For those who love a riff – and most importantly love Kitty’s vocal style – this second EP will be a welcome listen. Beyond that opening misfire, it’s all very promising: between the variety of grooves that make up the title cut and the theatrics of ‘Are You Happy’, the band shows that a willingness to mix things up can sometimes pay off. Opening with a rather weak track makes the EP seem flawed, but stick with it and you’ll find more than enough to enjoy.