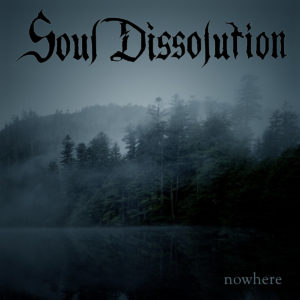 Released just a few months after the album, the ‘Nowhere’ EP is an intense affair. Not so much in that the bulk of the music comes with an expectant heaviness, but more in the fact that the material hasn’t been broken down into easily digestible chunks. The twenty five minute playing time is presents just two pieces of music – almost of equal length – meaning that those who really dig black metal will get plenty to lose themselves in, whilst the less committed might actually struggle to get through a whole track. The lengthy tracks and vaguely conceptual feel even suggests that these recordings are far more than just leftovers.

The better of the two numbers, ‘Road To Nowhere’ opens with a slow, melodic riff that sounds for all the world like it’s been loaned by Metallica for the weekend, with a repetitive, clean guitar motif that hints at the slowest moments of late 80s thrash and then – bam! – the drums opt for sheer pneumatics and the vocals lurch and wretch as if emitting from a man who’s been outcast from society. Incredibly, despite the wall of sound that’s been erected, the original riff can still just about be heard underneath, never giving in. For a DIY release, the recording budget and mix are sizeable. The riffs then intensify and layers of guitars take on a sheet metal sound that’s incredibly intense. Following a second verse of intense growling, the first real highlight of the entire EP springs out of nowhere, when the riffs drop into something much darker while a moody spoken vocal helps reinforce the gothy feel. Here, Soul Dissolution find a style that really suits them, with traces of Paradise Lost and My Dying Bride seeming like the chief influences. For the track’s second half, things really settle down: there’s a lengthy instrumental break blending the black metal and the early 90s goth sounds, that’s then topped with a soaring lead guitar crying into the coldness, before a purer black metal drone fills several bars…all before returning to the root melody of the verse. It’s not always easy listening, but it’s worth persevering with, especially once things tail off with a very heavy nod to 80s metal and a circular guitar riff that very much reinforces the idea that Soul Dissolution are always interested in melodies – no matter how heavy, or buried they might sometimes be.

‘Fading Darkness’ opens with a wonderfully mournful melody: heavy and slow drums underscore a repeated, almost circular guitar riff for a minute and a half’s worth of pure gothdom, before a slower, crushing riff blends black metal with a doom intent. Any feelings of doom are accentuated when returning to the main riff, which by now is played three times heavier still. It would feel like an eternal plod, if not for the attention to detail and the layers. For those who quickly adjust to and enjoy this riff, the good news is that it seems to go on for an eternity – only really changing enough to accommodate a cold black metal shrillness for a few bars. In progressive metal terms, everything’s so assured, it’s almost a pity the vocal has to intrude.

By the middle of the track, everything falls away to allow the opening riff to return unaccompanied before – much like the previous track – a terrific soaring guitar weaves a great but simple melody. With the soaring guitar and tribal drums allowed to work together, the EP is awarded its best moment – and these two minutes make ‘Nowhere’ worth hearing on their own. Eventually returning to a dense metallic chug and some sheet noise, Soul Dissolution dip even deeper into black metal before a circular lead guitar riff and distinct melody take influence from early In Flames and Alcest, something which will then see the EP through, aside from an occasional black metal grumble. It’s hard to get through in one go, but there are some great ideas in here…

With just the right balance between confrontational shrillness, crushing riffs and a slant towards European metal, ‘Nowhere’ has a lot in its favour. Despite a wall of sound approach in places, there’s very often a really tuneful lead guitar piercing through most of the material, which means that during the few times where everything just descends into a noise, there’s usually something better around the corner. It would be a pity if listeners baulked at the extended playing times and faltered at the first hurdle since the ‘Nowhere’ EP features some great playing. It seems a shame that it won’t necessarily be heard by anyone beyond the fringes of the black metal community…