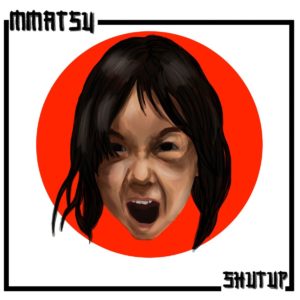 Based between London and Norwich, Millie Manders and The Shutup are a cross genre punk/rock/ska band who’s main aim is to hit their audience with big riffs and a bigger attitude. They’re one of those bands that seemingly never stops touring but, naturally, the hard yards put in on stage have made them tighter and tougher with the passing of time. Their 2018 EP ‘Shut Up’ showcases a variety of styles and moods from within the band’s musical canon, but still sounds remarkably coherent. This has much to do with Millie’s big voice – she has a definite presence, even on record – but it’s also down to some great brass; whether delving into straight ska or sounds of a more crossover variety, the horns sound huge throughout.

One of The Shutup’s most challenging numbers, ‘Brave’ isn’t just a ska-punk knockabout. The riffs on the verses are jagged but also seem to lurch back and forth, whilst Millie delivers an almost spoken vocal. The main hook comes from a repeated refrain that gives the effect of a ticking timebomb; the music is closer to the kind of ragga that Skindred have brought to punk and metal audiences than ordinary Less Than Jake fodder. Behind the voice, Matt Munford drops in a complex bass and for the chorus, the band explodes into a slab of thrashy punk that allows Manders plenty of opportunity to rise in presence and volume. On first listen, it’s slightly unnerving and the obviously English delivery isn’t quite in the style you’d expect. Once you’ve had a few listens to adjust, it’s obvious that there’s more than a little influence from early Sonic Boom Six and the vocal “ticks” become very much an earworm – good or bad.

With a louder guitar, ‘Lollipops’ has a far punkier edge from the outset. Driven by huge drums and a simple riff, the number’s verses are reasonably spacious which gives Manders plenty of room to work a vocal which quickly suggests something with far more immediacy. Moving into the chorus, The Shutup unleash the horns, and although things keep a tough and tight street punk stance, the brass really fleshes out the sound in a way that’ll bring in a more ska oriented listener. Gaining momentum and anger as it goes, this is certainly one of the EP’s standout tracks, coming across like a mean mix of early Goldfinger and ‘Coral Fang’ era Distillers. The lead single ‘One That Got Away’ features a meaty ska punk workout that shows things don’t have to be flashy to have a real impact. Throughout the number, drummer Alessandro Vitiello plays his arse off, while the horns punch in and out of a skate punk styled riff. Musically, it’s a real blast. It could sound generic, but with Manders showing off a hugely confident vocal that sounds like Monique Powell in a very bad mood, it more than holds its own. By the time the band chose to shoehorn in a melodic hardcore breakdown, it feels like a very well arranged three minutes. The music, perhaps, deserved more than a one-line chorus, but you can’t always have everything.

Best of all, and changing the mood yet again, ‘The Right To Life’ begins with a clean guitar and very 50s influence as Manders belts out her lungs with a defiant croon and then – boom – a full scale ska riot ensues, with speedy rhythm guitars and a full compliment of blasting horns. There’s a big influence from Save Ferris in the way those horns dominate, before a metal oriented sound beefs up the chorus. Interestingly, Manders shows off yet another side of her vocal talents when she unveils an odd affectation that’s very obviously derived from Skunk Anansie’s Skin. It’s unexpected, yes…but it works and adds weight to the idea that whether they’re going for absolute ska or a more crossover sound, there’s always a feeling that The Shutup are completely committed to rousing their audience to levels that could cause a sweaty riot.

The band feels that this release represents their best work to date and its hard to argue since the material and production on this EP is (mostly) terrific – bigger and more professional than anything The Shutup have committed to tape previously. The four tracks show a youthful sneer and a street smart attitude that’s as big as the riffs themselves; ska punk with a very British attitude that’s a welcome change from the brat humour of its closest US counterpart. Recommended.