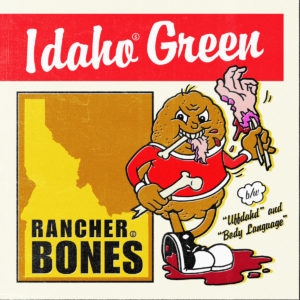 Stretching out to almost six minutes, the title track is a tour de force of fuzzed up retro rock. Kicking off with an intro that’s a direct steal from Golden Earring’s ‘Radar Love’, the number quickly shifts into high gear with a heavy and fuzzy riff that could be inspired by Brooklyn’s Sun Voyager. With the drums going at full pelt, the pacing is at first rather frantic and all the better for that, before eventually dropping into a more spacious workout where a repetitive riff could be on loan from a classic stoner rock outfit. Stretching the riff out for at least a couple of minutes alone, there’s very much an element of other-worldly, before everything returns to the (almost) stoner-punk of the former sounds. Musically, this is brilliant…but it’s vocally challenging, as the big and echoing riffs are blasted into oblivion by a retching, throat caning sound that’s all attitude. Whatever you think, this’ll make an impression!

Sounding like a different band entirely, ‘Body Language’ is a hugely melodic slab of noisy indie with a bulky riff joined by a pointed counter-melody in the lead guitar department. There are more than traces of older bands like Superchunk and I Love You informing the sound, but these always come with a strong feeling that Idaho Green are presenting these in a fresh way for an audience who might not necessarily be well versed in the darkest corners of 90s alt-rock. In fact, the lead guitar is so memorable in its simplicity, it really carries with an almost alarming, piercing tone, one that really works against the dense rhythmic chug. Also of great importance here – as opposed to ‘Uffdahd’ – is the voice: this time, there’s a genuine song; more than that, though, the choice of tone is impressive, as their frontman trades in a world of yelps for a rich – but almost comical – croon that makes Idaho Green come across like Pavement fronted by Smoking Popes’ Josh Caterer.

The EP’s most urgent track ‘Uffdahd’ attacks with a dual riff of a hugely retro quality. The first part of the riff involves a hugely overdriven guitar that could have been culled from the most melodic parts of Nirvana’s ‘In Utero’, before being interspersed by a wall of sound noise that’s like experiencing insane post rock colliding with a retro burst of noise rock on loan from early Sonic Youth. There are moments later where fat bass bursts through in a way that might make you feel as if at least one band member has spent a lot of time exploring the worlds of Slint and Tortoise. There are vocal sections, but these are screeching moments of insanity that almost act as extra instrumentation. If you came looking for a hummable melody, forget it…but in its aims and eventual explosion of sound, it’s pretty thrilling.

Whether tapping into quasi-melodic alt-rock in an unexpected way or just cutting loose on fierce noise rock, it’s always possible to understand Idaho Green’s intents. With three tracks that could be three different bands, ‘Rancher Bones’ doesn’t quite hang together, but approached as three separate tracks, it’s an EP that could perk up a playlist of undiscovered gold. Overall, this is a release that won’t be for everyone, but its many quirks and carefree DIY attitude more than suggests the band have some great ideas. They don’t always know what to do with them and the results are often disjointed, but that’s half of the charm.