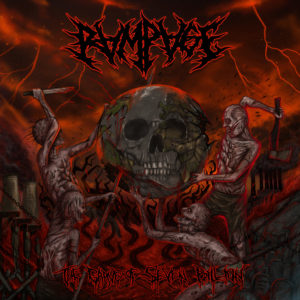 ‘The Grave of Seven Billion’, Ram-Page’s fourth album, recorded in 2015 and eventually released in 2017, showcases a well crafted thrash/death crossover sound, which is spot on when it comes to the style of playing, even if it’s a little lacking in production budget. Following an intro, ‘Betrayer’ wastes absolutely no time in reaching for the heavy, with speedy downstrokes that lay the foundations of a superb death-thrash crossover, inspired by many great works from 1988-91. The riffs come fast…and then faster still once the drums power through with a dominant bass pedal and abused snare. Hearing the band cranking their wares at full pelt is entertaining enough, but it’s when slowing down and throwing the more accessible elements of ‘Arise’ styled Sepultura and a few mid paced Slayer-isms into their pot when these Russians really excel. The middle part of this opener could be from any number of classic albums from decades gone by…and providing you’re able to treat frontman Stanislav’s collection of death grunts as extra instrumentation, chances are you’ll love this.

Recorded live, ‘Can of Beer’ begins with a superb Testament inspired riff – heavy but melodic, like Metallica on steroids – before lurching into some speedy technical death metal. Sergey Privalov’s guitar sound is hefty, but never quite as dominant as Dmitry Dolgov’s bass, which is both angry and lightning fast. On the occasions where the main guitar riff drops out for him to take the lead, the bottom end rattle is immense. Combining classic thrash, melodic death and the kind of lyric that harkens back to Biermacht and Tankard – not that you’d tell without a lyric sheet – this album highlight is a superb tribute to the past and further proof that retro death metal roots will never rot. ‘The President’, meanwhile, opens with a barrage of tightly-wound noise that fuses extreme thrash with a tension that absolutely slays. Even by the time some of the finely tuned jagged edges are crushed by a heavyweight vocal, it’s still possible to enjoy various thrash breakdowns and a solo delivered at speed. In terms of hooks, this is one of the album’s best tracks, since a shouty refrain just about pushes the death aspects towards extreme hardcore. In under three minutes, Ram-Page have truly vented, before he band’s title song kicks off like the ultimate tribute to Slayer, before Stanislav and Dmitry indulge in call and response death growls that give a classic sound a new dimension. By the middle of this track, the drums are absolutely furious and it’s a number that starts heavy and gets heavier still, but in terms of tightness, these guys are brilliant. Better yet, ‘Sanctions’ mixes thrash with a little Pantera-esque hardcore and a surprising drop into something gothy, all without losing the death metal core sound. It sounds like it should be a mess, but the band’s overall abilities ensure the quirks genuinely work. Factor in a couple of chugging and jagged riffs that come on loan from Machine Head and this has just enough of everything to please – provided you’re not hung up on wanting a clean vocal.

If ‘Sanctions’ appeared to push boundaries in a death metal melting pot, then the tiny funk interlude during ‘Last Defenders’ truly comes truly from left field. However, this addition never quite works and as a result, the second half of this number is far deeper rooted in classic death metal, but as proven before, it’s a style with which Ram-Page seem truly at ease. The closing pair of the title cut and ‘Blood Money’ rarely make an effort to add any more extra layers, but when death metal is played this well, there’s little point in tampering with the formula. The closing bars of ‘Blood Money’, especially, are a highlight, with a tough riff that sounds like the closing seconds of Slayer’s ‘Necrophobic’ replayed by a European hardcore punk band. Pure riffery…and no messing!

With ten songs and almost exactly half an hour’s playing time, there’s no room for flab or filler here. The budget is middling which means the end sound isn’t as broad as it could be, but looking past that, Ram-Page are aggressive players whom manage to tap into the vein of both ‘Human’ era Death and ‘Schitzophrenia’ era Sepultura extremely well indeed. For those who still love albums with a strong bias of classic sounding death metal – with a couple of welcome deviations – ‘The Grave of Seven Billion’ comes hugely recommended.