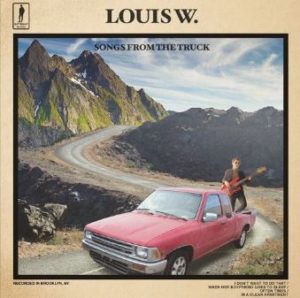 Louis Waxman is a Brooklyn based musician, sometime member of bands The Mayberries and Future Heart. His 2018 solo EP ‘Songs From The Truck’, as its title suggests, has an “of the moment” feel; a naturalistic set of sounds that would be a great soundtrack for a road trip. Mixing indie pop, electronica and funk it’s a bit of a mixed bag, but like similarly retro Norwegians Mats Wawa, there’s something in his sound that has the ability to lift the listeners’ spirits in just about…thirty seconds.

The EP’s first track, ‘I Don’t Want To Do That’ is a great mood enhancer, presenting a world of 70s funk bass, bell keyboards and sassy horns. Instrumentally speaking, it’s first minute could almost be an old David Shire instrumental reworked by Beastie Boys and Mark Nishita. That’s where it’s at, and while its sound is instantly familiar, it still manages to sound amazing. With the addition of some retro synths, a few echoes and a bit of guitar fuzz it builds nicely, providing a great backdrop for Waxman’s easy and slightly woozy vocal style. Eventually dropping into a groove that sounds like it could have come from the minds of Royksopp, this track sounds amazing…and if you love horns, you’ll love it even more. Taking a more downtempo vibe, ‘When Her Boyfriend Goes To Sleep’ mixes mournful brass with a sound of something that could be a church organ. Programmed beats and clicks hold everything together before Louis steps forward with a lax vocal that places him more in the role of musical storyteller than traditional singer. The layered feel is incredibly natural, and there’s as much appeal heere for a Mercury Rev fan as for someone who actually came looking for funk drenched electronica. It’s understandably more downbeat than the opener, but the horns carry so much of the appeal…and looking at all things combined, this number shows that Waxman is more than adept at penning a great, easy melody.

‘Often Times’ weaves the sound of early noughties indie pop with a neo-funky groove. Peppered by programmed loops that help this sunny slacker’s tune tap into alt-electronica beneath the soul-ish vibe, it really works as a world of melodic electronic pop fills a very layered arrangement. Sounding rather like an OK-Go styled band meeting with Mercury Rev, Louis then takes it up a notch by throwing in harder sounds and bits of guitar feedback. It should be a mess, but a vocal acts like the glue that brings it all together …but by now, you’ll have really tuned into his cornucopia of sound. More of an extended coda than separate track, ‘In A Clean Apartment’ fades in with a funky drum loop and equally funky bass and then drops into a groove with fantastic electric piano work, subtle guitar and a very simple and direct horn riff. It’s the kind of thing Daft Punk could have turned out during their immensely popular ‘Get Lucky’ phase, if only they had twice as much imagination and were half as irritating.

With a classically retro style and easy cool, ‘Songs From The Truck’ is one of 2018’s greatest surprises. For fans of great retro pop, horns and melodic electronica, it’s certainly not to be missed. It’s also very short, so for best results cue it up for listening next to Mats Wawa’s ‘Scuzz’ and you really won’t be disappointed. Fantastic stuff, indeed.

2 thoughts on “LOUIS W. – Songs From The Truck EP”