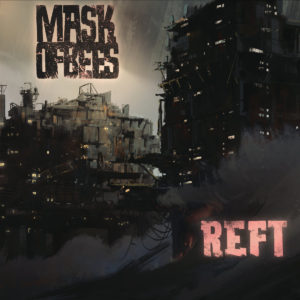 Beyond that, their art is left to speak for itself…and it is art, above and beyond pure music. …And the three pieces that make up the fifteen minutes of ‘Reft’ are wonderfully challenging. The opening number ‘Tepid Genghis’ starts with the rattle of a high hat, suggesting a jazzy soundtrack for a spy thriller, but pretty quickly morphs into an ugly animal with some pretty sharp teeth. To begin with, the guitars throw out slabs of sound, always keen to establish sledgehammer chords as opposed to an actual riff. When the riffs eventually grab a hold, though, they really do: terrifically heavy, but retaining an arty edge, as if on loan from a Buckethead record and then fused with edgy funk metal with some fluid bass to suit. Things are more interesting when scaling back, though, especially during a low key section that pushes the vocals to the front – vocals with an uneasy croon, a voice that suggests this music has ideas within something cinematic. For most alternative bands, that would be enough, but Mask of Bees have a trump card: saxophone and plenty of it. Unsubtle and angular throughout, it almost challenges the sense of any actual melodies, soloing wildly at times, honking oddly at others…though always adding plenty of atonal interest. This could be a mess, but it’s to the Bees’ credit – and a tight as hell rhythm section – that it doesn’t just work, but actually sounds like essential listening for those able to hear an open mind.

Slightly more accessible, ‘Satta Tester’ actually has a chorus of sorts, but the gang vocals charged with delivering the hook are often buried beneath a heavy guitar and busying sax. Riff wise “guitar bee” concerns himself with a tough sound, very much of the math metal school of playing and occasionally bordering on djent sounds. This time around, though, it’s that riff that’s holding most of everything in place, very much suggesting that Mask of Bees don’t necessarily believe in challenging noises purely for the sake of them. However, if you’re willing to stretch your ears beyond a threatening and slightly disjointed groove, there’s so much hear to love whether that’s an intensive and bellowed vocal or a heavy jazz leaning from the drums. With the guitar riff dominating, it could be argued that this is one of the heaviest tracks to ever include jazz fusion and brass and if you like a heavy riff, that could be a very good thing indeed. ‘Flux Pinner’ changes the mood yet again, opening with a riff on loan from a 90s funk metal band, before descending into a few spooked out Mr. Bungle-isms as an uneasy vocal joins a quiet-ish backdrop. Returning to heavier sounds (before a full return to the original riff), there’s room for a tight drum roll and cranking of volume, and the tension is as tight as a spring. Rinse… Repeat… Most bands would leave it there, but the second half of the track ushers in a slow stomp with a crushing riff where the stops and spaces almost say as much as the riffs themselves. Once you’ve applied sax to this great heaviness – a sax that seems to be ploughing its own path – there’s barely any room for anything else. It’s the musical equivalent of being lost within a nightmare; endlessly circling and being sucked further into a void. Why, then, is it so enjoyable? Again, it’s that feeling of musical freedom – an artistic streak that suggests that anything could happen that keeps you listening and, most importantly, entertained. This is absolutely twisted.

‘Reft’ is insane. ‘Reft’ is ugly. More importantly, though, ‘Reft’ is fascinating. The written word does not allow the soul of ‘Reft’ to be properly exposed. It’s a frighteningly encompassing work. It champions ideas over songs, artistry over a safety net. It’s also quite brilliant. Those willing to keep open minds and ears will be entranced by Mask of Bees’ sense of the absurd and left stroking chins in quizzical admiration, while those who only came for hooks are likely to be left scratching their heads. It’s great to know there is clever music still being made and not everyone’s in it for a big break – and if you like the idea of a metal version of Tin Hat Trio or Soft Machine, or John Zorn sitting in to jam with Haken, then you can’t afford to miss this.