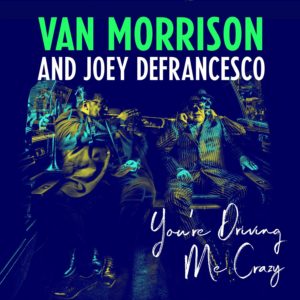 Beginning with ‘Roll With The Punches’, released at the tail end of September ’17, Morrison began what would be a mammoth run of work. Following that blues based album – one of Van’s best to date – he followed just three months later with ‘Versatile’, a lengthy but well arranged album of American standards and jazz vocal tunes.

‘You’re Driving Me Crazy’, recorded with organist Joey Defrancesco, follows a similar pattern, as it features Morrison putting his stamp on a few old classics including ‘Miss Otis Regrets’ and ‘The Things I Used To Do’. The album also features new takes on Morrison originals, including ‘Goldfish Bowl’ (originally featured on 2003’s ‘What’s Wrong With This Picture’), ‘Close Enough For Jazz’ (originally from 2012’s excellent ‘Born To Sing: No Plan B’) and ‘Celtic Swing’ (originally from 80s classic ‘Inarticulate Speech of the Heart’).