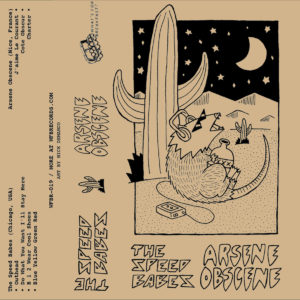 True to previous form, it’s a raw energy and general speed that makes their contributions to this split release with French lo-fi band Arsene Obscene so captivating. ‘Outhead’, so clearly takes inspiration from ‘Barely Legal’ era Hives in the way that a trebly sound cranks out a riff. The pace, on the other hand, is worthy of Speedealer. From the get go, rawness and speed are of the essence and by the time the drums and vocals kick in, very little is done to temper those rough qualities. In fact, the vocal is heavily buried beneath the music and then also buried under an effect that makes it sound like an address from a Tannoy delivered from an alien planet. Half the lyrics are inaudible, but the ugliness of their delivery is still very much felt. Given time to adjust, the drums and bass are very powerful too, making this punk/garage rock hybrid something that both fans of Zeke and the spikier elements of Man Or Astroman? should find appealing. ‘Do What You Want, I’ll Stay Here’ follows suit with both a repetitive riff and repetitive hook, but the way the riff drives its way into your skull is impressive. Here, the earlier experiments of the Speed Babes have reached a disturbing pinnacle and the sharpness and brevity of both these numbers ensures they won’t become dull or pedestrian for some time.

With a rougher production value, ‘Wear Cool Shoes’ dumps the punk and presents a straight garage rock vibe. The way the treble-obsessed guitars collide with a heavy drum beat is closer to Brooklyn’s Mad Doctors, but this is no bad thing. Without losing any of the feelings of pent-up angst, it allows more of an insight into the way the musicians work together; those looking for straight up noise might find this a touch more lightweight, but the inclusion of another heavily treated vocal still gives the track a real edge. ‘Blue Yellow Green Red’ – another piercingly sharp and trashy workout – cranks up the rhythm guitars and works a repetitive sound. Beneath everything, semi-frenzied vocals seem almost unintelligible, but as with ‘Outhead’, this minute long burnout is chiefly concerned with cranking a sound that really hits that garage vein good and hard. In just over a minute the band bow out – and its barely been five minutes since they made their grand and noisy entrance. Always keep ’em wanting more as they say, but what’s presented on the first half of this cassette has been excellent: the combination of speed and roughness might make this their best recording yet.

On the flip side, Nice’s Arsene Obscene aren’t quite as tight, but for those who want no-frills, no-wave guitar punk, there might be something that hits the spot. ‘J’aime Le Courant’ gives a good indication of the band’s chief interests, sounding like a zero budget tribute to ‘Leave Home’ era Ramones on a cheap boombox. At first, the volume and distortion sounds like it’s either broken your speakers, or about to break your speakers. Once your ears have adjusted, it’s obvious there’s more here and the straight Ramonescore deserves a bit more polish. The rhythm guitars are tight enough for the chosen genre and the sloppy lead work really amps things up nicely – it’s just a shame that presented in this way – everything’s so hard on the senses. ‘Charter’ brings much more of the same, augmented by a slight Sham 69-esque melody on the chorus hook, while the slower ‘Cote Obscur’ exposes the ideas of one man and a drum machine. The guitar sounds tap into some decently raw garage, but there’s not so much else of interest (although to be fair, it’s probably better if you speak French).

In this instance, it’s easy to see why each of these acts compliments each other; the Transatlantic angle brings back memories of the Nobodys/Funeral Oration split from about a century ago and as an introduction to two bands, this cassette is excellent, even though it’s fairly rough. As with most split releases, you’ll almost certainly come away with one band you much prefer and in this case, the lads from Chicago will probably run ahead by some distance. Even with its faults, though, this cassette represents an interesting nine and a half minute curio.