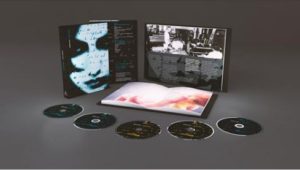 Wilson has remixed the original album in 5.1, which should delight fans, as a new mix is likely to bring out some of the more subtle elements of the original recording.  A hi-resolution stereo mix will also be included.

The blu ray disc will include a documentary on the making of the band’s concept masterpiece, though details on this are rather scant.  The original ‘Brave’ movie will not be included.

Two discs of live material will compliment the studio material.  The show from La Cigale in Paris will be released in complete form for the first time.  The main ‘Brave’ set was originally released as disc two of the ‘Made Again’ live album in 1995, but the encores have never been issued commercially.  In addition to the complete ‘Brave’ on the first live CD, a second disc will include ‘Cover My Eyes’, ‘Slainte Mhath’, ‘Sugar Mice’, ‘Sympathy’, ‘Easter’, ‘Waiting To Happen’, ‘Hooks In You’ and ‘The Space…’.