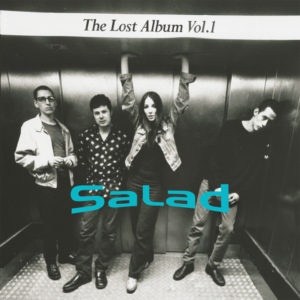 It may have been snobbery due to Marijne van der Vlugt’s previous career as an MTV VJ, but the critics weren’t always so kind to Salad back in the 90s. Those who liked them, however – whether from a journalistic perspective or merely a fan – genuinely loved them. Between 1993-97, the band released a string of enjoyable EPs and two albums, but it was in the live setting where the band really shone, as anyone who saw them on a couple of Carter USM tours in 1994-95 will attest.

Between 1995 and 1998, Salad recorded various new songs, some of which were intended to become part of a third album. Sadly a lack of record company interest meant the songs sat on the shelf and the band split. Twenty years on, Marijne amd guitarist Paul Kennedy reunited as a stripped down, semi-acoustic duo Salad Undressed. A renewed interest in the band followed and allowed a dive into the vaults of unreleased material. The first collection of previously unheard tracks, appropriately titled ‘The Lost Album, Vol. 1’, gives an excellent idea of how a third Salad album might have turned out.

Looking at the half dozen studio recordings first, there’s so much here to love. The opening number, ‘Big Monkey Girl’ plunges the listener straight into the darker aspects of ‘Drink Me’, with Kennedy cranking a hard repetitive riff, under which Pete Brown locks into a very early 90s alt-rock bassline. The bulk of the track sticks rigidly to this groove but never gets tiresome, especially since Marijne’s light vocal always pushes forth a great melody. The mid section, however, moves very fleetingly towards something even more aggressive with Pete grinding his bass while Marijne adds an atonal keyboard solo. A fantastic opener and no mistake, but as Salad slide smoothly into track two, the somewhat poppier ‘Cut And Cover’, this collection of songs asserts a gut feeling that it’s far beyond just being a rag-bag selection of leftovers. During this tune, Brown reinforces his melodic bass abilities, Paul throws out echoing guitar sounds that seem as if they could be culled from a spy soundtrack while a breathy vocal adds an almost retro pop quality to an otherwise very 90s sound. By the time a lop-sided piano solo sets out to disarm, the quirks within this arrangement seem keen to overshadow a fine tune, but with Rob Wakeman’s locked-in drum shuffle holding it all together, it’s a very enjoyable piece that could have easily found a place on an ‘Ice Cream’ era b-side.

A slow jangle informs ‘Debonaire’, but a sultry vocal wins out, especially on a spacious chorus that allows room enough for a bendy bassline. The cold and detached style reaches back to the earliest Salad EP recordings – complete with Melodica solo – but definitely shows an improvement in the lyrical department, while the instantly recognisable indie rock thrust of ‘Underwater’ sounds like a Salad tune you’ve always known. A fantastic track, indeed: the band are tight, and the spiky, fuzzy arrangement is of the tried and tested variety, but that won’t stop it becoming an instant favourite…especially if you’re a fan of the gravelly edged vocals (as per ‘Come Back Tomorrow’ from the ‘Diminished Clothes’ EP).

Combining a distorted guitar with tinkling keys, the semi-atonal ‘Billy’ is a superbly jarring and angular workout. At times ugly, this could be a great tribute to post-punk legends Wire, although it’s unlikely that the ever obtuse Colin Newman would ever sing about “chicken in the freezer”, but musically it’s full of grind and punch. The choice of naturalistic dual vocal between Paul and Marijne only seems to add to the chaos; this one’s definitely a bit of a love/hate affair. A musical oddity by comparison to many other Salad tunes, ‘Els’ is a woozy waltz driven by a fat bassline and semi-haunting vocal. It takes a few plays to really get the measure of the much more subtle approach, but it’s one of those tunes that shows how Salad have always been capable of power without noise. Multi-layered guitars flesh out the arrangement, jangling like a hybrid of Wire and The Wedding present (albeit softly), but Marijne absolutely steals the show with a lilting vocal that rises and falls with the arrangement. Given how this track pulls in the listener and holds them in a way that a few of the more frivolous tunes mightn’t, it’s a pity it comes to such an abrupt end; at just over two minutes, it arrives, weaves a spell and leaves without a word.

Moving on to the selection of 4 track demos, despite the relative lack of gloss, the song ideas and arrangements are all very promising. Even with a slightly muddy sound, ‘Wonderful Face’ is classic, classic Salad with Kennedy chugging a few Pixies-esque discords as Marijne settles into a vocal that’s three parts sultry and one part cheeky, complete with a wonderfully trill “woo-hoo-woo”, almost as if used as a place holder until the rest of the lyric can be found. Stylistically, it’s very old Salad indeed, in the way it would have found a perfect place as part of the ‘On A Leash’ EP had it existed back then. The militaristic beat combined with a few psychedelics occasionally makes ‘OK Again’ sound a little like Jefferson Airplane’s ‘White Rabbit’ in places – a mood which suits van der Vlugt so well – while resorting to crashing indie rock in others. It would have been good to hear a fully finished version of this track, but the recording as it stands, if nothing else, allows a greater insight into Wakeman’s drumming style; the live in the studio sound really accentuates his snare and the way he works off of the hi hat for maximum impact.

Via the quasi-sixties vibes of ‘Paper Cup’ we’re allowed more of Marijne’s hazy, vertiginous vocal style to come through than ever, complimented well by a reverbed guitar, resulting in a belter that occasionally feels more like a Lush tune than a Salad oldie. At least, that is, until a slightly punchier chorus rises…and while it might never be the most memorable Salad number overall, the individual elements show promise, especially Brown’s solid basslines lurking beneath the heavy jangle. ‘Wave’, meanwhile, sounds more like a demo due to a thin guitar and drum sounds coupled with a lack of warmth. Looking past that, the way the bottom end grinding drops in and out against a second jazzier guitar suggests the arrangement itself is great, so it’s a pity the world has to make do with a demo, while ‘Poor Peach’s combination of clanky rhythms and sweet vocal very much sets things off on an interesting tangent from the outset. Much like ‘Paper Cup’ there are hints of psychedelic interests battling with the more typical indie rock stance. A programmed drum loop makes this stand out among the other fuller sounding tracks, but being almost carried entirely by a dreampop-ish vocal, it makes for great listening. Much warmer, ‘Lift’ is a good showcase for Brown’s bass, before a very retro keyboard suggests this sparse arrangement could be transported back through another sixties filter. It isn’t to be, though; instead, garage rock guitars and a shoutier vocal ends up sounding like Salad jamming on something written by Robert Pollard/Guided By Voices…an influenced so obviously reinforced by the demo recording.

‘And This Night’, another highlight, uses the 4 track demo recording to layer vocals over a melodic bassline. What emerges is fine indie rock crossing into a dreampop sphere. Those who prefer Salad to rock out might find this a little twee, but it’s a reminder of how good Marijne’s voice can be, especially given room to stretch out. To finish, the upbeat jangler ‘Amsterdam’ is instantly recognisable as being a Salad recording once Marijne starts to sing, but parts of the arrangement are spikier than the norm. Maybe it’s the demo recording bringing out its more primal qualities, but Kennedy’s guitar work is savage, as if he’s channelling his own ‘What Do You Say About That?’ through a Damned workout. By the time the track reaches its climax – and, indeed, the end of this selection of rarities – the collision of brash guitar and organ represents something closer to the band’s live sound. Among the brasher elements, of course, Marijne’s vocal shifts between a natural belt and soaring harmonious sugariness on the chorus, so it’s got just enough of both sides of the band’s sound to please…and it certainly leaves a lasting impression.

In all honesty, it’s a travesty that tracks like ‘Underwater’ and ‘Big Monkey Girl’ weren’t allowed to run free in the wild as relative newborns in 1998, as they’re as good as anything Salad ever recorded. In fact, ‘The Lost Album, Vol. 1’ is more interesting than the bulk of the third albums from both Sleeper (1997’s ‘Pleased To Meet You’) and Echobelly (1997’s ‘Lustra’), proving that sometimes life just isn’t fair. For long time Salad fans, this compilation of material is a dream. Maybe for others, the energy and rawness captured in places will give a great insight as to why the band held an important place on the fringes of Britpop.