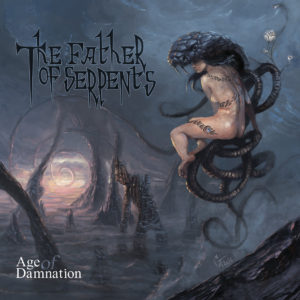 The Father of Serpents is a six headed beast comprised from members of various Serbian extreme metal bands. The combination of their talents hoped to recreate the sounds of classic doom with a melodic death metal edge, taking the mantle from established bands like (early) Paradise Lost, (early) My Dying Bride and Cathedral. It doesn’t take too long after hitting the play button on their 2017 release ‘Age of Damnation’ before it’s obvious that the vision they’d hoped for has been reproduced in a spectacular fashion.

This is one of those albums that starts well and gets better. ‘The Walls of No Salvation’ fades in with a full compliment of harmonic guitars, before a solid riff underpins the leads with a steady and gothic stomp. The contrast between the base riff and the leads is striking but never jarring…and just as you’ve got the measure of that, the band explodes into a heavier, pneumatic frenzy. In just a few short bars, they exercise their fast and heavy chops, before descending into a slow and gothic bass led groove. The focus of the verses accentuates the goth, with elements of Type O Negative colliding with an almost British quality – hints of the early Fields of the Nephlim inform the slightly atonal lead voice – while bassist Milan Šuput dominates with a fierce bottom end. Having showcased three styles in approximately two minutes, it’s time to bring them all together and what transpires is classically heavy; the tune has plenty of weight and – vocals aside – manages to balance everything with a melodious touch. As the twin leads return for a fade out, there’s very much a sense of completeness, of things having a natural cycle…and so, it provides a fine introduction to a new band of old faces. …And if you like this, then you’ll certainly like the remaining fifty minutes or so, since although The Father of Serpents are talented enough to lead the listener through a mixed style, they often choose to focus on the slow, gothic and weightier elements of their sound…which, in this case, is a good thing indeed.

A beautifully sad and haunting violin kicks off an instant album highlight, ‘The Flesh Altar’. Melodic death metal growls are far more evident here, but the contrasting string melody always distracts from the uglier parts of the performance. Accompanied by a slow and dominant riff, this is almost a complete homage to ‘Turn Loose The Swans’ era My Dying Bride, but frankly, recycling rarely sounded so good. The first couple of minutes of this particular number could stretch to a further six without ever seeming dull, but the band has other ideas, ushering in a lighter section with a cleaner vocal and more narrative style. Perhaps more indebted to a folk metal tradition, the lilting guitar melodies add an echoing and almost proggy touch; this turns out to be the perfect foil for a crushingly heavy death metal groove around the corner…and the push and pull between the two contrasting styles really draws in the ear. With a meaty old school lead guitar break on hand to fill more space, this track is nothing short of a doom/folk metal masterclass.

More eighties twin leads mesh against a pulsing bass and death metal growl at the outset of ‘Tale of Prophet’ in a melody that recurs throughout a solid but less interesting tune. A touch of groove metal lightens the death toll in places, but it’s when descending into a softer, almost purist goth style this number offers something essential. Although this less heavy moment appears brief – and is then threatened into redundancy by black metal rasps along the way – the more reflective passage is a solid showcase for the way Šuput uses his bass to interact with Željko Zec and Igor Lončar’s guitars. Once you’ve got a handle on that, the forthright bass seems much more dominant once the guitars drop back into a muddy, doomy intensity…which is often where these Serpents seem most at ease.

Following a blistering opening trilogy of tracks, there’s a brief feeling that the rest of the album might not have the same quality. Surely Fathers of Serpents will experience some kind of lag at some point, or perhaps expose some filler material? Nope. It seems that every effort has been made not to let this album out into the wilds of Serbia and beyond until it is good and ready. Makes sense too: with so much extreme metal, death- and doom metal vying for attentions (especially from Eastern Europe), a band needs to stand out. …And if Fathers of Serpents don’t always stand out through originality – and they’ve said themselves, this album is very much a homage to the great doom acts – then they need quality material.

From ‘Grave For Universe’s ultimate collision of Black Sabbath riffery and Entombed vocal attack to ‘Tainted Blood’s perfect hybrid of melodic death and doom metal staples, there’s more evidence of a band truly focused upon a solid and heavy style. While ‘Grave’ seems to be more intent on delivering a riff at the expense of almost everything, ‘Tainted Blood’ certainly shows off a dark and heavy heart in a way that should appeal to many fans of extreme metal styles. The chugging guitars throughout the number are among the album’s most direct, while the growling vocals harken back to a purer 90s form of death, with Chuck Schuldiner and Alex Hellid as obvious touchstones.

Into the second half of an already impressive long player, there’s very much more of the same, with ‘The Quiet Ones’ exploring a slow and almost sludgy riff, before stepping up the pace to throw out a fearsome chug, while Tamerlan makes his presence truly felt via a selection of husks, growls and deep bellows. The lyrical concerns aren’t always immediate, but with the neo-cinematic style on display here, it’s often best to accept his voice for what it is…and better still if you’re able to treat it like extra instrumentation. ‘Viral’ comfortably shifts between doom and goth, very much in the band’s tried and tested style, while ‘The Last Encore’, meanwhile, hits a musical groove that’s much closer to classic Paradise Lost, shifting from outright doom to a heavy gothic strut, bringing a clean voice to suit. At least at first, since the death growls are just around the corner. Looking a bit deeper, a shift in guitar tones suggests gothic prog-metal, a style which really shows off the musical prowess from all concerned. With ‘The God Will Weep For You’ throwing another massive riff forward from the outset, it’s easy to assume where things are headed, but the Serpents have one last trick to reveal when the violins head into an almost Arabic musical motif and everything else steps down from doom metal to unleash a funky slap bass… While it’s unlikely anyone will take this and run with it to create “doom-funk”, it’s a brilliantly fun interlude.

Perhaps the finest moments of the album’s second half – and indeed, the whole album – come courtesy of ‘The Afterlife Symphony’, a lengthy piece that, much like the impressive ‘Flesh Altar’, pushes Pavle Sovilj’s string work to the fore, where a mournful violin battles a very melodic and very 80s lead guitar for dominance. Moments of clean guitar suggest a band capable of branching out, too, but…ultimately stay in their comfort zone, ploughing a furrow of deep, intense riffs against a circular lead. Vocally, Tamerlan goes all out for throaty menace; his performance, while nothing new, should certainly please those who crave death metal roots. As the track pulls to a close with a barrage of drum fills, a devastating croon and twin guitars cranked to oblivion, it’s a track that covers pretty much all of the essential extreme metal bases and more.

For the style, this is an absolutely terrific album. It’s ten songs have a devastating crunch when required (and it’s seemingly required a lot!), but even the ultimate heaviness so often comes tempered by a haunting and melodic selection of lead guitars. The tunes are expertly crafted, with even the shorter pieces clinging on to an almost epic sense of the theatrical, while the individual players come together sounding much weightier than the sum of the band’s parts. In short, for intense metal, this has it all. Grab it now.