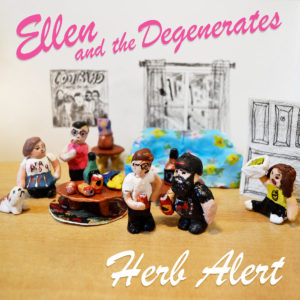 As for Ellen and The Degenerates, this third release certainly represents a high watermark for them, too. Their first two releases (self-titled and ‘Problems’, both from 2016) were distinctly lo-fi basement affairs, very much in the style of the UK’s Huggy Bear or Sympthy For The Record Industry stalwarts Red Aunts. ‘Herb Apart’ ensures that everything is properly audible, at last; from the start of ‘Ellen 2020’, with an ugly blast of guitar noise, this is an improvement on every level. More than an intro, but clocking in at barely a minute, it’s the perfect unveiling of the “new and improved” Degenerates: the bulk of the track spits a scattergun vocal against a hard and fast riff, but before everything feels overdone, the riff drops into a slower and heaver grind, as if the band had taken a big cue from the Melvins 1987 debut. So much in so little time, but everything instantly points to this being a great release.

‘Smoochy’ makes no attempt to be smart or flashy, instead just tears through two minutes of powerful and perfect punk that blends the speed and arrogance of ‘Television City Dream’ era Screeching Weasel with the instant hooks of Teen Idols. It’s a superb showcase for Louis behind the drum kit, as his full throttle assault is the perfect foil for Josh and Greg’s twin assault of chopping guitars, played with anger but never losing sight of a classic pop-punk stance. Slowing down midway, Elena’s vocal stretches a little, but rather than the band switching gears, it’s merely a device to gradually speed up, creating a cool tension both within band and listening audience. It’s a simple trick, but one that’s perfectly executed.

More tuneful, ‘My House’ is superb, pitching a great bassline against buzzing guitars, as if Black Fork channelled the occasional punk leanings from Elastica. It’s another vehicle that showcases some great drumming, but the more restrained vocal style means this is more accessible all around. A melodic guitar hook placed against a simple shouty refrain also makes this an instant standout – it’s hooky and memorable; the peak of the band’s talents this time out. ‘Fair To Me’ takes a similar musical base, but pushes it much further, as the hard and speedy vocal approach is constantly appealing. Elena sounds like a natural force throughout, but just as strong, the rhythm section really shine. Naomi’s punchy, busy bass and a drum part that’s heavy-on-the-toms once again show that this band are incredibly tight. Stretching to almost a full two and a half minutes, the closing number ‘Milk’ is almost progressively epic by garage punk standards, but the band never choose to be flashy or overtly clever. The extended playing time is merely used to hone in on a repetitive chorus and cool second hook – this time utilising some backing vocals for simplistic but pleasing results. With some rousing gang vocals to bow out, it really feels like all of the essentials have been packed in here. …And the fact that the opening riff bares a passing resemblance to the Ash classic ‘Kung Fu’? That’s surely just a coincidence, but it really drives the track from the get go.

This EP is garage-punk 101 in lots of ways, but with songs that believe that brevity brings extra power to a band who’ve really tightened up in every respect, ‘Herb Alert’ is still set to challenge a few more established punk bands’ releases for genuine excitement. It’s short, sharp and above all, a resounding success. If you love any kind of punk that isn’t part of the corporate mainstream, you need this record.