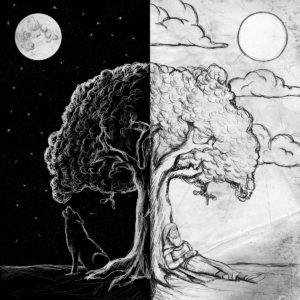 One of two very melodic pieces, ‘Jeka Prve Kise’ begins this short musical journey with an instrumental workout that combines elements of tuneful black metal with pagan and folk metal tinges throughout. A keyboard drone paves the way for soft, cleanly played electric guitar chords and notes; it’s simple musical motif is haunting yet inviting, as it explores familiar territory from thrash and progressive metal terrain, all the while suggesting things will eventually explode in a big way. When that explosion comes, ‘Pod Mesecom Prastari Hrast’ wastes no time in dropping into tried and tested black metal themes. The once folksy electric guitars thrash with a cold sheet metal sound, the drums descend into deep pneumatic territory and the clanging ride cymbals are relentless. All that said – and despite not breaking any new ground – there’s an instant feeling that All My Sins are better at this kind of thing than most. Maybe thirteen years has given them time to really think things through… During the second half of the track, things don’t really lighten up, but there’s still an obvious musical shift – in this case, the black metal guitar parts give way to a more accessible thrash/melodic death sound. It’s a slight but welcome shift, suggesting that – although dealing in extreme genres throughout – the band are really keen to put across a sense of scale. Obviously, a scratchy black metal vocal used throughout always ensures this’ll be far too edgy for many, but it’s exceptionally well played…and by the time the coda presents an acappella voice chanting something that sounds like an incantation, all the important bases have been covered.

The intro to the EP’s centrepiece, ‘Pomen Usnolem Suncu’ is a genuine highlight. Ignoring influences from Cradle of Filth and countless Eastern European black metal practitioners, guitarist “V” chooses instead to channel the work of the legendary Ritchie Blackmore, and in this case, a clean and melodic tune sounds very close to the intro to the Rainbow classic ‘Makin’ Love’ (Blackmore almost certainly lifted it from a classical piece, but all the same, it’s almost impossible not to think of Blackers when hearing this). That excellent tune fades all too quickly and in its place comes a full on thrashing assault with black metal vocals leading the way. The thrash tones throughout are preferable to cold black metal guitars, especially as these allow more textures to come through. What’s obvious here – more than during the previous track – is that drummer Nemir (sitting in for this EP’s sessions) is a great player, attacking his kit with plenty of power, but also bringing with him a degree of fluidity, while Nav wrings the hell out of his bass neck almost throughout. After three minutes of aggression, the melodic intro returns, this time augmented by a beautifully played lead bass, allowing everyone a breather before playing on with a full-scale black metal assault. Overall, these eight minutes cover a great deal of extreme metal ground; both the playing and production are gold standard for a DIY release. There’s no question, this is ‘Lunar/Solar’s crowning glory. With ‘Zbogom’ acting as a coda, working spacious and clean guitar notes augmented by whispered voices, there’s very much a feeling of everything coming full circle by the EP’s end – the cycle of the sun and moon fully explored in an intense twenty two minutes.

This is a must hear for fans of progressive black metal. The vocals aren’t in English, but given the distortion and general husk of the voice, that hardly matters; what truly carries this through is the attention to detail within the arrangements. ‘Lunar/Solar’ shows that things can sound like a sledgehammer and yet still have so much interest, if you can just scratch below the surface. With a thoughtful approach to its creation and a duration that doesn’t outstay its welcome, this is almost perfect. Obviously, if you’re not into this kind of metal, you’ll still hate it, but those with even the vaguest interests in black, pagan or even folk metal styles should set aside time to appreciate this DIY release.