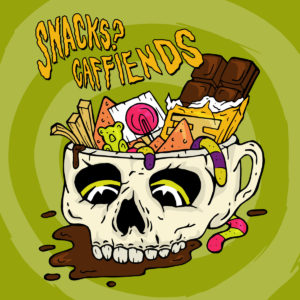 Caffeinds’ 2014 release, the ‘HeeBee GB’s EP’, was an unpolished affair, but there was no denying it was a recording made with love. It was rough and ready, as you’d expect something DIY to be, but above all, it was fun. It didn’t get a lot of attention within punk circles (certainly not on a big scale at any rate), but that didn’t stop the band trucking on. That same year’s full length release blended influences from Screeching Weasel and the Misfits in such a way that you couldn’t help but like it – warts ‘n’ all – while 2015’s ‘No Gods, No Decaf’, with an increased recording budget and a bratty attitude, was their best work to date. With each release, it’s been possible to hear Caffeinds making a necessary leap forward.

Following a year off from recording, the band appeared to make up for lost time. The first half of 2017 saw not one but two Caffeinds releases. The first, a split album with Pennsylvania punks Peabodys, offered a half dozen Ramones-inflected punk and garage rock belters – bread and butter stuff for Caffeinds – but ‘Marbles’ in particular, made the release worth hearing, with a combination of high octane riffing and a classic shout-along chorus. Caffeinds’ contributions to this disc were solid, though little would suggest how much better their part of their next studio recordings would be…

Fast forward to June ’17, and the band’s second release for the year. Sometimes tapping into the band’s more melodic side, he split 7” with Canadian band Snacks? gives long-time fans everything they ever hoped for. Right from the get go, the Caffeinds side of this release marks the true moment where faith in an often rough and ready sounding band has finally paid off. ‘Pod People, Pod Problems’ shows off a hefty bassline, a truckload of infectious pop-punk melodicism and the kind of production values Caffeinds have always deserved. From a slowed down NOFX-ish bass root, ringing guitars spring up adding a melodic counterpart that makes the best of a multi-layered recording, before Andy Minor’s clear vocal performance adds a snotty but appealing edge. It’s the most commercial the band have ever sounded, but there’s no denying the sharper sound suits them…and it’s not like they’ve softened, either, as after a solid hook and even better musical arrangement, this still comes with a coarse pay-off line: in this case, “we’re totally fuckin’ screwed!” leaves a more than lasting impression. Overall, this number sounds like a great homage to ‘Blue Skies’ era Ataris and definitely rivals As The Sun Sleeps‘ ‘Beering’ as punk track of the year.

‘The Crowd Goes Mild’ isn’t quite as instant due to a looser arrangement and scratchy post-hardcore inflected vocal, but a slightly sloppy Ben Weasel inspired lead guitar and repetitive hook pay off well enough, before ‘Self Aware’ brings the Caffeinds’ side of this split to a rousingly sharp close with a hard and relentless riff and classy chorus. There are strong leanings towards Caffeinds of older times here, driven by a harsh guitar sound that mixes classic punk with a touch of garage rock, but things take an upward turn during the track’s instrumental coda where a melodic lead bass collides with a simple lead guitar and the band drives forth with a bouncing rhythm. While Caffeinds come steaming out of the gate with their best track to date, there’s a slight feeling of everything being front loaded, but repeated spins suggest that all things combined, this is among the band’s best work.

On the flipside, Canada’s Snacks? bring something more raucous. Their two numbers combine the accessible chorus work of prime Face To Face with the rattling melodic hardcore roots of early No Use For A Name. Of the two songs, ‘Pick Me Up’ is the weaker, despite a forceful bassline driving everything forward apace and a chorus that unashamedly delivers more “whoahs” than The Offspring and Pennywise combined. To be fair, though, that should only tell you how good ‘Gnar Town’ is… Making a much bigger feature of a huge drum sound and a punk ‘n’ roll spit ‘n’ sawdust ethic, this second number shows Snacks? at full pelt: rowdy, ready and fantastically insolent. The real highlight here is the way the guitar solidly weaves a rock ‘n’ roll lead in and out of a veritable punk wall of sound. While nobody is attempting to re-write the book, a great production value and yet more gang vocals make this band – and especially this track – appealing right from first listen.

Releases such as this show why the 7” format is still one of the best when it comes to making an impact for punk bands. Caffeinds have really shown how they’re ready to take the next career step (‘Pod People’ is worth investing in this release for alone) and in just two songs, exactly why Snacks? are definitely a band to watch out for. With two great bands and exclusive material – including at least one bonafide classic track apiece – this split EP should be snapped up by all lovers of DIY punk sounds ASAP.