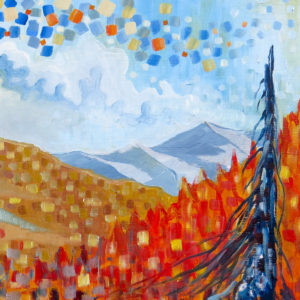 For this band, the splitting up of tunes could be beneficial, since their heavy style appears to have more of an impact when they throw riffs at their audience for twenty minutes or so and then retreat. Also, these four songs have an almost relentless aggression – particularly when it comes to the vocals – so listening in short bursts is very much advised.

With one of 2017’s best stoner grooves, ‘I Am That I Am’ begins things exceptionally, as the riffs come heavy and with attitude, each chord buzzing like the bastard son of Goatsnake with gravelly lead vocals reminiscent of Tad to give everything some extra grit. The verse grinds and grooves but when a simplistic chorus hits, the Devils take things up a notch with a catchy refrain, before dropping back with an unexpected twin lead. The slightly more melodic guitar line works excellently against the heavy sound. With an unashamedly retro approach, the four musicians lay their wares plainly for all to hear, and while this isn’t exactly representative of the other three tunes, it should at least prick up various ears, especially those belonging to fans of ‘Deliverance’ era Corrosion of Conformity. ‘Dead and Down’ adds a slower, grungier edge to something equally heavy and, in turn, should make the band sound sludgier, but despite some insane bottom end and slightly aggressive counter melody, everything seems to play second fiddle to the vocal. The voice on this track is so strained and forced, you can literally hear the rattling of phlegm, while the relentless volume calls to mind Mark Hennessy’s jarring drawl from Paw’s ‘Dragline’. Beyond that vocal, there are some weighty musical ideas, from the aforementioned counter melody of the guitars to a booming drum line that seems to capture the basic essence of the band.

From here, things move swiftly from the weakest track to one of the best, as ‘Rusty Nail’ fuses stoner heaviness with a superb swagger and – thankfully – the vocals return to a mighty croon. Throughout this track, the hard edged guitars impress as pointed leads brush against a chunky riff, with [Nirvana and Mudhoney studio hand] Jack Endino’s brilliant production bringing out the best in a very live sound. With the vocals dropping back at the mid-point, a funky bass is introduced and the track sounds ever more confident; there’s enough self-belief in the music for the eventual ugly, hoarse voice not to kill the mood. If you want at least half an idea of how this full-scale rocker sounds, try and imagine Tad working through a Black Stone Cherry belter… It’s kind of implausible that it should work, but it does. Finishing up with a heavy swaggering riff that almost carries a dark cabaret sound and an unnerving bar-room edginess, ‘Caveman In a Computer Room’ ushers in retro sounds of a different kind, with the Devils channelling the darkness of Skeletons In The Piano. As always, the riffs are huge and threaten to crush everything in their path – and while they are half a world away from the straight stoner of the opener. but it finishes this release on a high. The main riff really sustains interest; the basic melody shows a tough musical unit and while the vocals can be hard going, they are most at home with this quirkier style.

Even with a slightly challenging vocal delivery, there should be enough here to interest those who love the noisiest aspects of alternative rock and other sounds on the stoner fringe. The hooks are big, the riffs even bigger and it comes as a pleasant surprise that legendary producer Jack Endino has chosen to give this material a much bigger sense of wallop than afforded to most of his previous charges. If the next two chapters of this monolithic tale promise to be just as chunky, then Devils Hunt Me Down could be set to build upon their cult audience. Of course, only time will tell… Stay tuned.