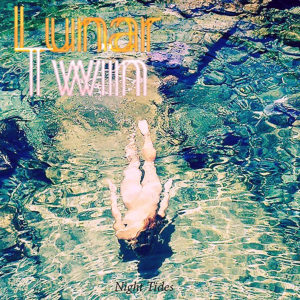 Set opener ‘Waves’ – released as a digital single ahead of the EP – gives a great indication of the Lunar Twin world, forging ahead with a slow beat that rarely changes, set against a deep bass and even deeper vocal. Perhaps the biggest draw here is the fact that vocalist Bryce Boudreau sounds so much like Mark Lanegan, he could even be Lanegan himself. Counteracting the dour vocal, an acoustic piano throws out several simple musical motifs, as if channelling an old Thomas Newman soundtrack. Looking at each of these pieces combined, ‘Waves’ might just be one of the best numbers Soulsavers never recorded. With a sparse but heady backbeat, unsettling festive bells and even more unsettling bleeping noises, ‘Blood Moon’ announces its arrival in a most unsettling way. Lunar Twin appear much colder, more detached than before, but once things drop into a very 90s trip-hop groove, the melody unfolds and the vocal, too, finds a safe place. Bryce delivers a slow, husky and near whispered tale while his musical compadre Christopher Murphy immerses himself ever deeper into a world of knobs, samples and layers. There’s also an unexpected element of subtlety, as deep beneath the more obvious and sometimes jarring sounds, an ambient wash echoes brief moments of Jarre’s ‘Oxygen (Part 6)’, lending an even more retro quality. Overall, it’s not as appealing as the opening number (nor was it surely designed to be), but despite everything – and through sheer balls – everything still works.

The EP’s best track – and it’s a tough call – ‘Coral Sea’ combines a hard pulsebeat with a world of dreamy chords, thus creating a brilliant sound that seamlessly melds electronica with 90s goth. A heavy drum beat holds the music together in a measured and almost stately manner, which alone would make the number worth hearing. As if completely aware of the brilliant sound being weaved, Bryce puts in an equally superb vocal. Allowing the darker and more syrupy elements of his voice to coat everything, his inner Lanegan is truly unleashed…and truly on form. For a brief instrumental break, the big drums subside and leave behind a programmed loop, which combined with the aforementioned keyboard washes sounds very appealing. With one last outing for an understated hook, Lunar Twin show their style is in no danger of wearing thin, despite the sledgehammer influences. ‘Birds of Paradise’ changes things up and lends more of an early 90s dance edge, hinting at a liking of Utah Saints and ‘En-tact’ era Shamen. Obviously, the contrast with the rich vocal is at its most obvious and those who enjoyed the mellower strains of the previous tracks might find this a little harder to attune. What it does, though, there’s no question it does very well and if nothing else, it shows a very different side to Lunar Twin’s musical arsenal.

Moving into the final pairing, ‘Prayers of Smoke’ fuses Depeche Mode’s sense of power and melody with a dub bassline, thus creating a strong and distinctive intro. There follows a great backdrop for various echoing sounds, big beats and droning elements to do their bidding. The deep voice is the perfect match for the huge drum sound and more, while a twanging guitar adds an important extra texture. This number is a great workout for Bryce, his rich voice relishing each smoke-filled syllable that passes, while Murphy’s multi-layered arrangement has an undeniable presence. It might sound like something – or perhaps many things – you’ll have heard from Soulsavers and ‘Mezzanine’ era Massive Attack in years gone by, but sometimes that feeling of familiarity is what makes something so attractive. This is certainly one of those times. The title track, meanwhile, winds everything down with several minutes of ambient noise. Droning keyboards underscore a moody vocal; nothing ever rushes, nor seems to go anywhere in particular. Despite the minimalist approach, it’s almost the very core of the Lunar Twin musical ethos; this other worldly approach showcases a fine, fine vocal, builds up a musical cocoon and occasionally even seems like a passive mood enhancer rather than something created for active listening. It isn’t the perfect track by any means – and certainly not while ‘Coral Sea’ feels so fresh – but as far as this EP is concerned, it definitely gives everything some very thoughtful closure.

These six tracks almost achieve the impossible by being incredibly downbeat and yet oddly uplifting at the same time; music that seems dark but somehow carries a positive vibe almost throughout. It may all feel rather familiar, but it’s definitely none the worse for that. In fact, fans of Soulsavers and Mark Lanegan should prepare themselves for a pleasant surprise: this could be your new favourite record.