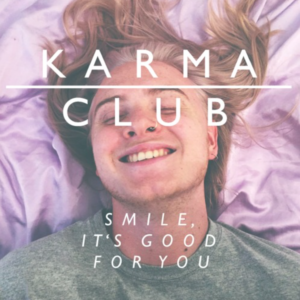 ‘Timelines’ begins the EP in fine musical form, as a melody centring around a soft and funky bass quickly takes shape. With that set against a simple drum, it would perhaps be too easy enough to write this off as Vampire Weekend’s pop-oriented cousin…and then the guitar steers everything firmly into classy indie-pop waters, dictating the bulk of the tune in the process . That lead guitar comes with a high and clear tone which, when placed against the strident rhythm, feels incredibly uplifting. It’s then down to the voice to fit the bill – and as is well documented, a bad vocal could kill this kind of style stone dead. Unfortunately, Karma Club come with the kind of vocal that’s an acquired taste. Frontman Thomas Andrew settles upon a performance that’s somewhere between a melodic spoken tone and occasional wails. It’s such a pity, especially given that the music is so enjoyable. Andrew also handles all bass duties – and since it’s so often his basslines that provide so much of the heart and soul of the Karma Club sound, his role is a very important one. Concentrating on a very pleasing musical arrangement, then, it is very much a plus point that this track bows out with an extended instrumental workout, taking things from the previous indie-pop and farther into a trippy post-rock sphere, always driven by the ringing leads. During the second half of this number, without too much obvious showmanship over a melodic ear, guitarist Connor Crabb really shines.

With tighter structures, ‘Coming Over’ melds New Order-ish basslines to the alt-pop of Bombay Bicycle Club and the inherent British qualities of the almost forgotten Frankie and The Heartstrings. Gluing a tough and jangling guitar to a solid rhythm, this tune doesn’t break new ground stylistically, but very much shows Karma Club at their toughest but also most melodic. The slightly harder edge actually seems better suited to the vocal, too, so with that in mind, it’s a decent track for first time listeners. With a reasonable amount of goodwill built up over those first two tracks – even with vocal misgivings – the momentum is somewhat lost during ‘Sixties’. Although a very radio friendly tune, big on melodic bass lines and with a smoother vocal, the bulk of the number lacks any real interest…unless you’re keen to hear something that sounds like a cast-off from The Killers’ catalogue. That said, if you’re not too worried about originality, it’s got bags of melody and is easily the number that suits Andrew’s voice best.

Last up, ‘The Collective’ blends all of Karma Club’s finer elements into a more than solid pop-rocker. Huge solid basslines underscore a mid-paced rhythm, while Crabb wheels out more big, ringing tones as per the opener. Hearing him use that approach to counterbalance those bass lines makes this track consistently entertaining, while drummer Max Lewin ups his game and bashes out a solid rhythm throughout, often flitting between the tom and hi-hat with relative ease. As if knowing they’re onto something almost tailor-made for the radio (and the UK’s Absolute Radio is seemingly the most obvious contender for maximum air-time), there’s a few sizable whoahs inserted intermittently, which obviously make a great hook. With some great things in place – a melodic bassline, some great ringing guitars, a simple hook to send everything off and even Andrew’s voice entirely sympathetic to the arrangement, you might have to ask why this wasn’t used as the opener?!

‘Smile, It’s Good For You’ doesn’t always get it right. It might even pass you by completely if you try and listen when in the wrong mood. It certainly takes a few spins to really show its true colours. The best advice is to not cast it aside and move on too soon, as – despite some indifferent vocals – there are some good tunes here and it’s worth checking out for Connor Crabb’s soaring guitar lines alone. As far as debuts go, this isn’t a classic, but it’s an interesting start.