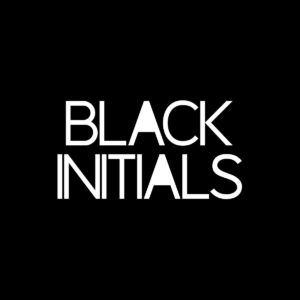 Ramsgate is a seaside town in east Kent, once famous for the docks, its hovercraft trips and a town horse. It still boasts an impressive harbour, but often gets overlooked in favour of Margate – its arguably more famous brother – situated just along the coast. Ramsgate also home to alt-rock two-piece Black Initials, a band whom bring a mixture of garage based sounds on their debut EP.   The four songs have traces of Black Keys and a swathe of rawk appropriated from Royal Blood, but Joss Barnes (drums) and Tom Stephens (g/vox), take things further by also injecting bits of funk and jangling indie elements into a proportion of their art. For fans of the two man set up, they should provide a reasonable amount of entertainment.

First off, Stephens isn’t necessarily the best vocalist, but he makes up for this by knowing how to work a riff or four and, in the case of ‘Groundwork’ – more of which later – he shakes everything by throwing pointed math rock angles into sounds that could have otherwise ended up rather ordinary. The backbone of everything, Barnes is a terrific drummer: he isn’t always the most flashy, but works a few mean fills and the live sound of the EP gives his kit a hefty presence.

The EP opens with unaccompanied vocals, which is ot necessarily the wisest move, but it is certainly an extremely brave one. The melody seems as if it could slip into the Cadbury’s Flake advertising jingle at any given moment. Maybe it’s the subconscious of too many 99 ice creams living in a seaside town, or maybe it was purely unintentional, but it’s there. What’s more, it doesn’t really give too much indication where things are headed. Luckily, the drums are on hand to give things a beef, and the heavy snare contrasted with the vocal melody is striking, to say the least. The belated introduction of the guitar finally adds the missing ingredient, but those expecting heaviness might be disappointed at first. The tune which eventually unfolds boasts a mean strutting rhythm that’s easily entertaining and the marriage of the riff and those drums is enough to sustain the bulk of the track. A brief foray into buzzing, stoner-ish guitar work suggests BA could branch out, but things return to the main melody whenever required and the duo seem more than comfortable with that. There’s a reasonable song here, but it’s the drum fills which follow provide the track’s genuine highlight: during the instrumental break, Barnes whips up some genuinely great sounds. ‘Mexico’ features a mean bass drum and clean guitar work before dropping into a dirty shuffle that combines superb muted strings and a harsh feel. Chrorus-wise, it’s all change with a tip of the hat to Royal Blood’s dirty stoner grooves and a touch of fuzzy blues. These two contrasting elements would make a great track, but the injection of funk riffs midway definitely gives things a lift. By the time the garage rock freakout grabs a hold for the track’s second half – complete with more buzzing guitars – it’s clear these guys can play up a storm.

Taking a step back, ‘On & On’ is a weaker track. The riffs occasionally win out with a dirty string-bent sound and a rattling drum part is more than confident, but it isn’t enough to cover for an unsure voice and a naive lyric. While it’s always clear what Black Initials were aiming for – and the raw sound of the recording suits the music – the vocals are a big drawback, especially when presented against such a sparse-ish backdrop. The musical format really gives Stephens (sadly) very little to hide behind. The music just about rescues an okay track, but Black Initials have already proven they’re capable of so much better. Luckily, the aforementioned ‘Groundwork’ is another belter. Following an excellent drum intro, huge chords throw out distorted sounds before piercing cleaner notes add off-kilter melodies to the incessant rhythm. Moving into what passes as a chorus, art rock and math rock sounds jostle against tough and rhythmic chords with Stephens’s voice dropping in and out of each available space. It’s here Black Initials prove themselves – there’s nothing wobbly; both musicians are heard in an extremely tight unity and the sharp elements of the tune never become dreary. The track’s second half is more sedate, preferring to concentrate more on tough riffs and an eventual garage rock groove, but this is also first rate.

Between these two men and these four songs, Black Initials create an interesting and enjoyable alt-rock noise. Brockley Forest may be heavier on the feedback and slide guitar, Royal Blood may be heavier generally, but these guys are tight. They certainly best their nearest equivalents in a battle for rhythmic interest over bluster. There are flaws but, genre-wise, it was always going to be about feel over technicality. With that in mind, ‘Black Initials’ is a promising debut.