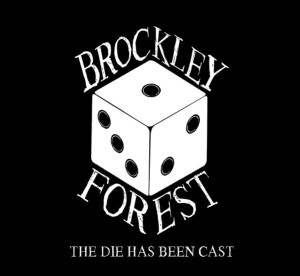 Although strongly modelled on their previous recordings, lead track ‘Rubicon’ presents the Forest in a slightly more accessible fashion.  By enlisting Band of Skulls producer Ian Davenport, the band have sharpened up the sound, albeit without losing too much of their edge.  With a slightly bigger budget, their brand of garage blues sounds all the more adventurous, with moments of unaccompanied vocal at the outset and unexpected crooning as things move towards a strong close, all wrapped the kind of approach that comes across like early Black Keys retooled by Band of Skulls.  Extant fans will be thrilled to note that Dec’s slide guitar prowess has only become tougher in the intervening time since the release of the previous EP:  throughout this opening track, his full arsenal of grubby sounds is stretched out to almost five minutes, while drummer Seb rattles a defiant backline, heavy on the toms.  This is good, but It’s with the second track, however, that the huge musical leap taken over the previous year becomes ever more obvious. ‘Taboo’ bolsters the usual slide guitar and drum attack, often with a wall of distortion sounding as if there’s more than one guitar at play. The heady mix of garage rock, blues and almost stoner-esque fuzz shifts things farther towards the sounds of Royal Blood – a hugely popular band at the time of this release – and the almost mechanical approach to a riff borders on the exhilarating.  Over the steady beat, the vocal, bolstered with reverb sounds equally cool – and it’s been mixed in such a way that it’s breathy without losing any of the natural force.  Factor in a quicky backing vocal during the mid-section that almost mirrors the mechanised riffing alongside a first rate guitar break and this becomes a pretty killer three minutes.

Bottom end and plenty of reverb are in order during ‘Get Us Out of Here’. with a great riff filling space between vocal outbursts, all pinned down with a superb rattling drum part.  In terms of generating the kind of energy that invites maximum crowd bouncing, the repetitive nature of this tune captures that mood better than most – again, presenting one of the band’s best tracks to date – while a lead slide guitar really cuts through the air.  The only criticism being that it’s all over too soon.  The moody ‘Eastern Land’ allows Dec a chance to come to the fore with a bass heavy stomp, interspersed by equally slow snare beats.  The distorted guitar parts have a surprising melody, their fuzziness recalling the better elements of Band of Skulls and Royal Blood once more, while a dual vocal helps shape a melodic chorus.  Much like ‘Taboo’, those already familiar with Brockley Forest will hear the band they’ve come to love, yet at the same time, experience something far grander, musically speaking.  Bringing everything to a close, the spasmodic punch of ‘Feel Alive’ allows the duo to get quirky, but there’s always a keen eye on an overall melody. With a great focus on the vocals, the multi-tracked voices steer the piece throughout (a “hey hey” proves rather catchy), but there are elements within the music which are also particularly strong: an all too brief slide solo captures the essence of the earlier recordings within about ten seconds, while the drums come with a decent amount of swagger.

As always, there’s nothing to win over the unsure, but garage blues fans have just experienced five tunes that are as strong as any of the chosen style.  Gritty melodies coupled with huge amounts of attitude, ‘The Die Has Been Cast’ is potentially Brockley Forest’s best work to date (and certainly their most commercial) – and all (importantly) without compromising their original musical vision too much.  Based on the talents shown throughout this EP, these guys are more than deserving of at least half the attention afforded to those overhyped major-label puppets Royal Blood.  In fact, anyone with the faintest interest in Band of Skulls and Royal Blood should step this way immediately…