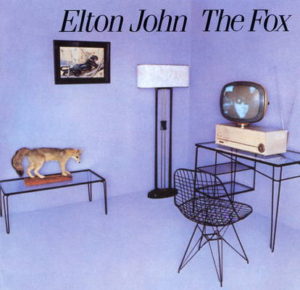 In the first quarter of 2011 Universal Music released a five disc super-deluxe edition of Elton John’s multi-million selling, career defining ‘Goodbye Yellow Brick Road’. While huge chunks of the album are undeniably great, did we really need another deluxe edition of this when an excellent three disc edition was released (complete with SACD compatible material) ten years previously? There are other parts of Elton’s huge body of works worthy of expanding.

Elton’s fifteenth studio album, 1981’s ‘The Fox’ should be first in line for the upgrade treatment. Given that it’s an album that’s largely unknown to the casual admirer and yielded no big UK hits, why should it be reissued? Let’s look at the evidence…

Having been one of the best – and most prolific – performers of the 1970s, Elton ended that decade with one of the worst albums of his career. The disco-infused ‘Victim of Love’ featured barely any piano, clocked in at a (mercifully) brief half an hour and kicked off with an eight minute electronic cover of ‘Johnny B. Goode’. This was the sound of a once-great man literally bereft of inspiration, burned out almost beyond recognition. There seemed to be no hope of a decent follow up. However, while occasionally lacking compared to his mad heights of the mid seventies, his first two eighties albums, 1980’s ’21 at 33’ and 1981’s ‘The Fox’ were both very strong offerings.

‘The Fox’ is particularly interesting: it scored Elton a top twenty hit album, but rarely gets a positive mention. It was also pieced together: its epic high point, a trilogy of musical pieces, ‘Carla/Etude – ‘Fanfare’ – ‘Chloe’ didn’t fit ’21 at 33’s more frivolous mood. A few other ‘Fox’ album tracks were completed at the previous album sessions. [Five more b-sides also date from those same oversubscribed recording period].

The big reason for a new version of ‘The Fox’, though, is simple. To tie in with the original release, a VHS tape named ‘Visions’ was issued containing short films providing visuals for each of the ten songs. In early 1982, few people would have had the means to watch this and, indeed, it has become one of the rarest music VHS releases in history. Despite being directed by Russell Malcahy, none of the clips have ever resurfaced as DVD extras (and one didn’t even make the original UK VHS release!). The US market got a Laserdisc reissue a few years later, but that too remains a somewhat elusive item.

One day, some of this material may be reissued – those b-sides are definitely worth unearthing – but even so, we imagine that a double disc set of ‘The Fox’ seems unlikely. An expanded two disc edition, in an ideal world and if done correctly, should look something like the item detailed below. In the meantime, we’ll keep dreaming…