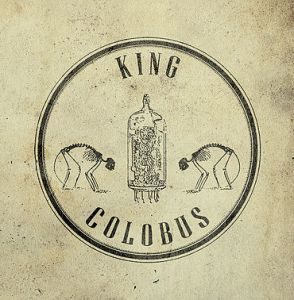 Their music is simple but has depth and the general coldness is perfect for the sturdy croon MacPherson uses to deliver his message. Ideas of “life compressed” and not thinking too much only add to the sense of being dominated by powers that be – and, of course, the pay-off “just give us tits and teeth and we’ll do all the rest” makes these alluded statements as clear as a sledgehammer. In terms of style, this is great – heavy enough to please the stoners, light enough to catch the attention of those who (perhaps rightly) feel Joshua Homme’s work is too heavy handed. Overall, it’s a track that really grabs a hold and shows this band’s true potential.

‘Get Up’, meanwhile, opens with a sparse twang, closer to The Bad Seeds or The Old House Playground than any stoner fare. Within a few bars, its full steam ahead, though, as the drums thump out a measured, near cymbal-free beat underneath a compliment of guitars. The riff might be on loan from Queens of the Stone Age, but the performance has more finesse, with the guitars buzzing while keeping an eye on melody. The once false-start of an intro soon makes sense, returning to fill a middle eight, as the stripped back sounds really compliment another fine vocal. In and out in just three and a half minutes, this is a great exercise in putting across a heavy riff in a song-oriented way – a trait that’s certainly one of Colobus’ best strengths. Let’s not forget that Homme would have dragged this out for twice as long and lost half of the audience in the process. Although ‘Tits & Teeth’ might show Colobus at their most inventive, their title song presents them at their most compulsive. The stoner sounds previously lurking now come across with an unrelenting style, as guitarist Gavin Huck cranks his amp for some heavy and slow riffs, blending the stoner rock with a genuinely bluesy intent. Taking a slower pace, the riffs have plenty of space to fill and bassist James Bailes steps up accordingly, dropping in heavier riffs than ever before. With a slow wah-wahed solo taking pride of place, the bluesier elements really cut through in style. Like experiencing Soundgarden’s ‘Slaves & Bulldozers’ reimagined by the likes of Truckfighter and topped with a superb baritone, it’s not just atmospherically dark but also oddly enthralling as the slow grooves and heavy sounds hit in a way that many have created, but few have managed to do so quite so flawlessly.

Lastly, lending the EP something ore commercial, ‘Wait’ serves up a fuzzy, yet choppy riff; the guitars drive the verse in a very mechanised fashion, a musical tactic reinforced by heavy solid drums. Fitting this odd hybrid of stoner rock buzz and new wave robotics, the lead vocal is suitably cold. Shifting into the chorus, the band bolsters the arrangement with fuller sounding riffs, borrowing elements of Queens of the Stone Age and Royal Blood – solid influences indeed, but the resultant music never feels like a direct lift. It has little in common with either ‘Tits’ or ‘King Colubus’ (the track), but the love the band has for their chosen style more than exudes itself through each passing riff.

Occupying a musical space somewhere between a stripped down Queens of the Stone Age and a heavy cousin to Editors and something more interesting than Royal Blood, King Colobus make music that’s both confrontational and thoughtful. These four songs have the kind of weightiness to get them noticed…and yet are curiously accessible. The music is appealing, but MacPherson is the real star, always lending a defiant croon against whichever twisted backdrop suits his chosen lyric the best. Part metal, part goth, all powerful: Hail the king.