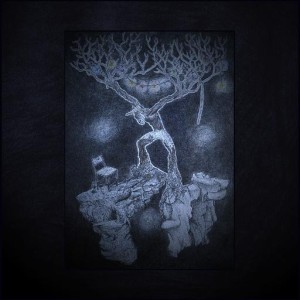 Old House Playground come to you from a dark corner of Manchester (via Greece) bringing folk tales of heartbreak, dark premonition and woe.  With a heavy mix of blues, rockabilly and dark twang, Their debut EP, ‘The Great Escape’, comes across as a hybrid of Tindersticks, Nick Cave and Tito & Tarantula, delivered with the sophistication of Chris Isaak (more specifically his classic ‘Baby Did a Bad Thing’).  Frontman  Tryfon Lazos combines and twists such influences into his own style throughout the four featured tracks, leaving behind a release that’s nothing short of wonderful.

‘Polite Fiction’ starts the release in good stead with a gritty guitar riff that sounds like a more modern take on a rockabilly twang with echoes of Sun Records classics.  Focusing on the brooding riff, we are catapulted into a world of retro grubbiness, as if Chris Isaak had stepped in with The Bad Seeds.  A steady beat backs that riff, increasing the Tarantino-eque  unease, and once Lazos starts to sing, everything comes together with a brilliant style.  His voice shifting between that of an old rock ‘n’ roll crooner and the dark cabaret of Nick Cave, with a touch of Tindersticks, you know you’re in good hands.  In terms of songwriting he’s no slouch either; whereas some would consider the stylistic content strong enough to win over an audience, Lazos ensures there’s a rousing hook to propel everything into the stratosphere. In this case, the repetition of “the more it spins, the harder it is to grow it out” provides an unlikely point of reference, but the melody is such a strong one, it’s difficult not to find an instant affinity with it.  Throw in a touch more angular guitar, a discordant solo and a selection of horns, and this is a potent mixture of sounds.   Stoking up the muted trumpet, ‘Stardance’ sounds like a collaboration between Isaak in a bastard of a bad mood, stepping into a session by Tito & Tarantula.  The reverbed guitars are exceptionally classy as they chug a simple riff in a confident air, while Lazos sounds even better than before, bellowing each line as if his life depended on it.  Those who love retro sounds, perhaps with a touch of cabaret swagger, should find an instant classic within.  While the chorus isn’t as strong as on the opening track, the inclusion of an off-kilter guitar solo – complete with carny intro – and some great brass is enough to win over most fans of the style.

Changing the mood, a heavy dobro leads the way for the country tinged death tale ‘All Day Today’.  Again, in a mood that begs comparisons with Nick Cave, Lazos adopts a fine, fine croon as he takes on the mantle of the harbinger of doom, his voice crooning, cracking, wobbling with unease, yet all the time knowing he must tell such a tale with conviction.  Joined by a choir of voices, the intensity swells, thus reinforcing the more gothic edge to the overall sound.  The finger picked, metallic sound of the dobro never pales throughout and by the time the lead voice is left to deliver the last few lines unaccompanied, there should be no doubt you’ve just witnessed something fantastic.  Bringing various elements of the previous tunes together to leave us with something bordering on the epic, the title cut opens with some thoughtful lead guitar work, before percussionist Andreas Venetantes wades in with a thumping and steady rhythm that’s heavy on the snares.  Bringing in a little Greek tradition, the vocal wails in a manner that introduces a touch of Mediterranean folk music, an accordion lurks in the back, while rattling noises evoke some rather loud castanets.  As the piece progresses, the intensity builds, with a moody bassline and equally moody (and loud) vocal filling plenty of space, although it’s various thoughtful, grubby guitar lines that eventually rise to dominance.

At the end of the four numbers, the urge to hit the repeat button is strong. Granted, the influence from the Bad Seeds is unavoidable – perhaps even a little too unsubtle for some – but the influence from traditional folk and country elements, the Mexicana horns and drones of accordion should be just enough for the smarter listener to recognise these tunes are never plagiaristic of everyone’s favourite Aussie harbinger of doom. Smart, sophisticated, a bit spooky: Old House Playground have all the important bases covered: in short, these four songs are essential listening for anyone who enjoys anything with a heavy twang and a tale waiting to be told.