Since the mid-80s, They Might Be Giants have carved out a niche in quirky satirical songs, off-kilter power pop and more.  Despite having dozens of albums to their credit and having recorded literally hundreds of songs, it’s arguably 1990’s hit ‘Birdhouse In Your Soul’ and its parent album ‘Flood’ for which they best known.

Marking its twenty-six year, the two Johns (Flansbrough and Linnell) have been performing the album in its entirety to the delight of fans.

You can now download a complete performance of ‘Flood’ recorded live in Australia – and fittingly titled ‘Flood Live In Australia’ from the below link.  You can also read Real Gone’s review of ‘Nanobots’ here. 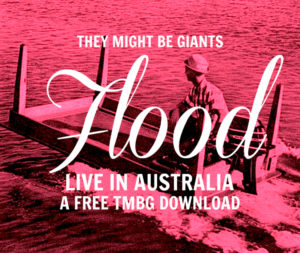