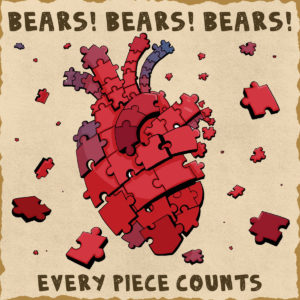 The title track kicks off with feedback, signifying a full throttle ride ahead then quickly bursts into a punky workout punctuated by a full brass section. First off, the horns add a distinctive tune to embellish the verse – bearing more than a passing resemblance to the melody from The Waitresses’ perennial ‘Christmas Wrapping’ – before piercing the chorus with blasts of brass hinting at Less Than Jake’s ‘Automatic’. While the horns are the number’s most distinctive elements, everything else here works just as well: the guitar riffs come at speed with huge influence from classic Less Than Jake and the sharpness of middle period No Use For a Name, the bass is solid but never intrusive and a gruff vocal adds to the general rawness. Without losing any of the energy, the band moves into ‘Highs & Lows’, where the rhythm intensifies at first, increasing the thrashing guitar sound. The bigger focus on an almost skate punk intent is then afforded the perfect balance via a pure ska chorus where a dancing bass teases alongside some great percussive work. From somewhere between the two contrasting styles comes a great hook with a multi-tracked vocal. Musically, it’s a near perfect representation of ska-core…and half-arsed songwriters like The Planet Smashers could learn a thing or two from these guys.

‘Hold Back’ couples a mariachi intro to a high energy workout that takes cues from LTJ’ and more besides. The rhythm guitar work is impressively sharp – something all too easily overlooked behind those horns. The vocals appear rough and carefree but often suit the job in hand and – in and out in under two minutes, B!x3 really go for broke, before ‘More Forgiving Day’ stokes up the horns and the choppiness, ending up like a hybrid of ‘Throw a Brick’ and a couple of other tracks on Less Than Jake’s ‘Pezcore’ disc. The inclusion of a rousing chorus would normally be the feature that leaves the important lasting impression, but hefty ska riffs and horns ensures the maximum skankability of the tune reigns supreme. If the influence from LTJ was obvious before, on ‘In My Ride’ it becomes as subtle as a flying brick – ‘Throw a Brick’? – even going as far as including a gang vocal on the chorus that’s joyously sloppy, while some wheezing and parping brass boosts the feelgood qualities of the tune. To finish, ‘It’s My Fault’ introduces an unexpected power pop edge, with an intro loaded with muted guitars. At the point they’ve hooked in the listener and promised something different, it’s a quick shift into upbeat ska all the way. As before, the horns shift between brassy confidence and slacker-punk wheeziness, but the love and DIY ethic within the band shines through at every turn. A reasonable hook joins some more upfront basslines and even a more organic guitar part…which, in all, shows a band with passion and talent. It takes a few plays before it all really sinks in…and while it might not necessarily be as cool as ‘Highs & Lows’, it’s a great way to finish.

The vocals might be a little on the wobbly side in a couple of places, but pretty much everything else on this second B!x3 release represents top class DIY ska-punk. Six tracks delivered with passion, ‘Every Piece Counts’ is the ideal release for anyone who wishes Less Than Jake would revert to their slightly rawer, early sound. Ska punk might have been bobbing in waters of musical predictability for what feels like a lifetime but, as this release shows, it’s far from dead. There’s certainly no need to call the lifeguard yet.